ROCKVILLE, Md. (DTN) -- With most of the country's corn and soybeans in the ground, insects and diseases are ramping up in their usual summer fashion.

Some Midwest and Mid-South growers are facing rising Japanese beetle populations, and soybean aphid populations also are picking up in the northern Cornbelt. Meanwhile, a brand new corn disease first found in 2016 is already surfacing in Nebraska cornfields and more reports of it are sure to come.

Farmers should get used to hearing this disease's name.

As a brand new disease, researchers have little information on yield loss or management, which is frustrating, Jackson-Ziems admitted. Like all bacterial diseases, fungicides won't affect bacterial leaf streak, and it clearly overwinters easily on infected corn residue. New research shows that some grassy plants might also help host it.

Most importantly, there were reports of significant yield loss in certain hybrids last year, and Jackson-Ziems urges growers to scout for it.

"It's important to know if it's out there and how bad it is," she explained. "And if you have yield loss at the end of the season, maybe this could help explain that."

"Look for narrow, brownish-yellow stripes between the veins on the lower leaves," she said. "They can be short or as long as the whole leaf."

These symptoms mimic gray leaf spot symptoms, but that fungal disease has never been found this early in Nebraska, Jackson-Ziems said. Also, the lesion edges of bacterial leaf streak tend to be wavier than those of gray leaf spot, she added.

For more information, see the most recent article on the disease from the University of Nebraska here: http://bit.ly/….

Japanese beetles are making a pest of themselves in states such as Missouri, Kentucky and Illinois. Although the beetles prefer ornamentals and orchard trees, they can make themselves at home in corn and soybean fields, said Burrus Seeds agronomist Stephanie Porter.

"They really, really like corn silks," she said. They will also feed on corn leaves and can defoliate a soybean plant with surprising speed.

For now, infestations mostly are below threshold levels where she's scouting in Illinois, Porter said. Populations are rising quickly in Missouri, and Porter has spotted fairly heavy infestations in western Illinois, as well.

Keep in mind that soybean plants can withstand a surprising amount of leaf feeding. Don't spray without consulting this chart from the University of Wisconsin: http://bit.ly/….

Spraying may be justified in corn fields if you find three or more beetles per corn ear, clipping silks to within 1/2 inch of the ear, when fields are less than halfway pollinated, that same guide states.

Windshield scouting won't cut it with this pest, especially given the low market value of corn and beans this year, Porter warned.

"The damage will often start on field edges," she explained. "That's why we tell people you have to walk into the field and look through it before deciding to spray, because things could look a lot worse on the field edge than throughout the entire field."

Soybean fields may be behind schedule in parts of the Midwest, but the soybean aphid is right on time.

Reports of aphid sightings are starting to roll in from Minnesota, Wisconsin and Indiana, but most are still far from threshold levels.

Remember that spraying too early can not only waste money, but also kill off valuable beneficial insects and lead to rebound infestations later in the season.

"Populations can build quickly, and treatable infestations (i.e. over 250 aphids/plant) in June are not unheard of, although they are relatively rare," Purdue scientists Christian Krupke and John Obermeyer wrote in a pest alert. "Soybean aphids can be finicky about weather and conditions that include high heat and strong storms can prevent populations from building."

Minnesota growers should be especially alert, now that populations of pyrethroid-resistant aphids have been found in the state for the past two years. (See the DTN story here: http://bit.ly/…). 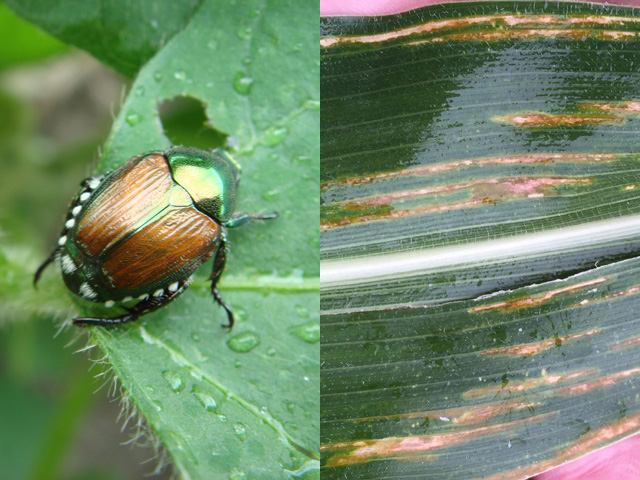