One of the many benefits promised by cover crops is their potential to scavenge nitrogen from the soil in the fall, winter and early spring and in doing so lessen nitrogen (N) leaching.

However, covers crops, particularly those high in carbon, can also temporarily tie up nitrogen as their residue decomposes. Nitrogen is taken up by microorganisms decomposing the residue, which not only ties up existing soil N but can compromise any surface-applied nitrogen fertilizers aimed at subsequent crops.

Many cover crop residues have carbon-to-nitrogen ratios (C:N) of 40-to-1 or greater, which makes them similar to residue stubbles left over from corn, wheat or other cereal grain crops. It's fairly well known that those old-crop residues, with C:N rations of 60:1, can tie up a significant amount of N, and it's often recommended to apply 40 to 50 pounds of actual nitrogen just to overcome this temporary tie-up.

John Lory, a University of Missouri nutrient management specialist, recently wrote that cover crop residues can cause significant N tie-up to soil-applied fertilizers put on top of the residue. "This is especially true for UAN solution," Lory said in an article that can be found here: http://extension.missouri.edu/…. "This is particularly a problem with liquid nitrogen applied on top of the residue."

The risk of tie-up depends on the residue and its C:N ratio. If the cover crop headed out and is tall and stemmy when terminated (high carbon content), any surface application of nitrogen on top of the residue will be temporarily immobilized.

Lory said, "Farmers can plan ahead for this problem by injecting nitrogen into soil, either liquid or anhydrous ammonia. This avoids contact and tie-up by the residue." If injection isn't possible, he said surface applications of granule or prill forms will have less tie-up than liquid solutions.

While I agree with that theory, I've learned the actual tie-up depends on many factors. I have been investigating the benefits of cover crops since 2004 and have learned a few things that have astonished me. In spring 2009 in a continuous corn field, I applied (using disc openers) 75 lbs. per acre of nitrogen as UAN in early April into a rye cover crop. The rye was just tillering. About 30 to 35 days later, I planted corn and then terminated the rye when it was beginning to joint and stood 2-plus feet tall.

About 30 to 40 days later, I pulled soil samples to determine a sidedress nitrogen rate, eventually applying another 75 lbs. of N dribbled directly on the surface and next to the corn rows.

While walking the field to pull samples, I recognized that the rye residue had decayed very rapidly, literally disappearing in four to five weeks. You would never see this response in wheat stubble after harvest. That swift decomposition was mineralizing nitrogen just ahead of V8 leaf stage of the corn crop, when nitrogen uptake really commences.

Further investigation showed when I terminated the rye at early jointing, the C:N ratio is normally below 40:1. The N-rich fodder, with perhaps a C:N ratio as low as 30:1, plus the pre-plant N applied, caused the residue to quickly decompose and caused no immobilization.

More importantly, I recognized that rye was virtually banking the nitrogen applied early in the spring and began to mineralize it just as the corn crop needed it. Thus, it served as an N stabilizer, protecting it from losses by keeping it in an organic form until later.

My summation would be crop residues tie up nitrogen but cover crops may not -- if you terminate them in a nitrogen-rich state and then let nature take its course.

Dan Davidson can be reached at djdavidson@agwrite 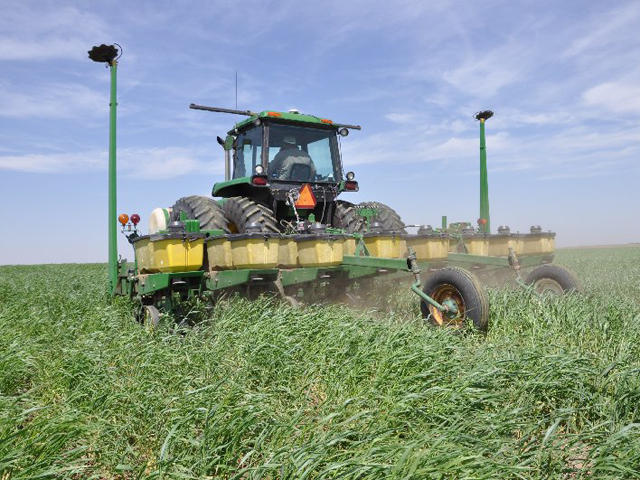