ROCKVILLE, Md. (DTN) -- When it comes to neonicotinoids and honeybees, the view can be a little hazy -- or rather, dusty.

A study by Purdue entomologist Christian Krupke last week was the latest to conclude that honeybees are widely exposed to neonic-tainted dust during corn planting. It joins a growing body of research, which shows that talc and graphite seed lubricants can "dust off" the seed during planting and carry coated insecticides with them.

However, a "smoking gun" toxicological link between neonicotinoid exposure and the colony collapse disorder plaguing the honeybee industry has been harder to nail down in research so far, noted Iowa State University entomologist Joel Coats.

As a result, seed companies continue to advance neonicotinoid use, and the economic value of these insecticides has become the new battleground between researchers and companies.

Neonicotinoid manufacturers are rallying around a 2015 industry-sponsored study that concluded that growers see significant yield and economic benefits from using neonicotinoids in corn and soybeans, among other crops.

In the meantime, university research in the Midwest is chipping away at these yield claims, first in soybeans and now in corn seed. Krupke's study found no significant yield benefits from small-scale university corn trials in recent years.

"That there is widespread exposure to these chemicals at planting time is becoming widely accepted," said Coats, whose own work has found neonicotinoid dust in the pollen of flowering weeds at corn planting time.

Krupke's study adds to this picture. His study found that up to 94% of the honeybees in the state of Indiana were at risk of exposure to neonicotinoids during corn planting. (See the DTN story here: http://bit.ly/….)

Seed companies such as Monsanto and DuPont Pioneer have played a major role in increasing the use of neonicotinoid seed treatments over the past few years. They have added the insecticides to almost all corn seed and most soybean seed they sell, as well as increasing the application rates and using free replant incentives to encourage farmers to use them.

However, in its response to DTN, Pioneer referred questions about pollinator dust-off exposure to neonicotinoid manufacturers, such as Syngenta and Bayer. Monsanto spokesperson Charla Lord said that following pesticide and seed treatment labels was sufficient to protect non-target organisms such as bees.

Bayer and Syngenta pushed back on Krupke's dust-off findings, but along with Pioneer, they mostly focused their responses on rebutting his yield findings.

Most of the companies noted that the EPA, in recent neonicotinoid risk assessments, found that seed treatments pose a low risk to pollinators. However, to date, the EPA is not yet using dust-off exposure and risk data in their assessments of neonicotinoids.

Both Bayer and Syngenta also noted that they are working to reduce the dust-off problem.

Bayer produces and sells a product called Fluency Agent, designed to replace talc and graphite as seed lubricants and reduce dust-off. The product is required for Canadian growers who use neonicotinoid seed treatments, but it has been slow to take off in the U.S.

"[Use] still remains low relative to other lubricants, but this year we introduced Fluency Agent Advanced...which we believe continues to improve upon the technology," said Jeff Donald, a spokesperson for Bayer.

These new products and formulations will likely lower the high levels of exposure found in Krupke's study, and others, but more remains to be done, Coats said.

"There's nowhere to go but up from here and try to improve formulations, as well as really inform people better about whether they need [neonicotinoids] and during which years and whether companies provide enough options for untreated seed," he said.

Every seed company and neonicotinoid manufacturer that responded to Krupke's study focused heavily on his yield findings.

Over the years, academic research has built a case that soybean neonicotinoid seed treatments do not provide consistent yield responses in the Midwest, but the research is thinner on the corn side. Krupke's study staked out new territory by noting that Purdue's corn trials from 2012 to 2014 did not show any significant yield benefits.

Representatives from Syngenta and Bayer criticized the small scale of the corn trials in Krupke's study, which they said were not representative of American corn acreage on average. Along with Pioneer, they cited a series of 2015 studies commissioned by the industry from a private research company called AgInfomatics.

The study included a meta-analysis of published peer-reviewed studies, replicated field trials from neonicotinoid registrants, and studies from the Arthropod Management Tests, a publication for routine screening tests of insecticides. It found an average yield benefit of nearly 18% for corn treated with neonicotinoids.

The researchers also surveyed farmers and found a number of other financial benefits, such as not spraying alternative foliar insecticides and saving time on scouting. They concluded that the treatments added an average value of $13 per acre for U.S. corn farmers. (It is hard to estimate the exact cost farmers pay for neonicotinoid seed treatments per acre given that they are often sold as part of package with other chemicals, but also because application rates and prices vary by company, and untreated corn seed is hard to find).

The AgInfomatics study has garnered criticism from a number of academic entomologists, starting with its industry sponsors and non-peer reviewed status.

"Time and time again, research in various sectors (biomedical, nutritional science, agricultural science, etc.) has shown that reports funded by the industry tend to support the industry perspective," Penn State entomologist John Tooker noted. "This report certainly does that, and it is good to recognize that potential lack of impartiality."

Krupke noted that much of the data used was from field trials focused on registering a product for the industry that favored worst-case pest scenarios.

"The data are somewhat skewed, because studies where yield-reducing insect populations occur are the ones that most often get published," added University of Minnesota IPM specialist Bruce Potter.

Tooker also strongly objected to the claim that if seeds were not treated with neonicotinoids, farmers would replace them in nearly equal amounts with organophosphates and pyrethroids.

"Prior to the availability of neonic seed treatments, no more than 30% of corn acreage and 5% of soybeans... received foliar or soil-applied insecticides to control insect pests," he noted. "This situation changed a bit in soy with the arrival of soybean aphids in 2001, after which still less than 20% of soy received an insecticide to control this pest species. It is notable that this pest species is not controllable with neonic seed treatments."

Currently, neonicotinoids are used on tens of millions of acres annually, on nearly 100% of corn seed and the majority of soybean seed, as well as in crops such as cotton, sorghum and wheat. 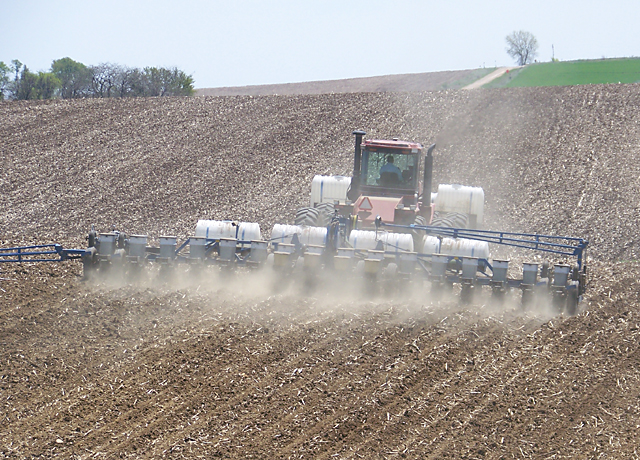