"For everyone who applied nitrogen pre-plant, a lot of it has got to be going right down the tile lines and down to the Mississippi," he said.

Nitrogen loss -- and its crop and environmental consequences -- seem more possible than ever during this wet spring.

Take heart and try to be patient, said University of Illinois crop scientist Emerson Nafziger. He maintains that nitrogen loss is likely far lower than many growers think.

"The biggest danger here is our imagination gets active and tells us there's nothing left out there," he cautioned. "Nitrogen loss is not the biggest factor facing our corn crop right now."

THE UPSIDE TO THE COLD WEATHER AND HEAVY SOILS

Nitrogen is often lost by leaching -- the physical movement of nitrates out of the soil by water -- or denitrification, where bacteria convert nitrates to gas.

The common denominator for both loss mechanisms is that nitrogen must be in nitrate form.

In order for nitrogen to convert from ammonium to nitrates (nitrification), it needs three key ingredients: heat, moisture and aerated soils. Although the winter and early spring supplied some warm temperatures, much of the Midwest has seen cool conditions throughout May.

As a result, some nitrogen has converted to nitrates by now, especially if it has been in soils for many months. Recent University of Illinois soil samples show that about 70% of fall-applied nitrogen and at least half of March- or April-applied nitrogen was in nitrate form by early May, when the wet weather struck.

But cooler temperatures in May have likely slowed nitrification recently, Nafziger said. "Our soil temperatures have risen slowly in Illinois," he said.

Medium- and heavy-textured soils may also have slowed losses from leaching, he added.

"Soil samples taken from the same fields before and after the heaviest rainfall period do not show large decreases in N in the top 2 feet of soil," he wrote in a university newsletter.

Water moves fairly slowly through silt loam soils, silty clay loam and heavier soils, which are found in many parts of Illinois and the Corn Belt. University of Minnesota Extension educator Brad Carlson estimated that nitrogen moves only about 5 to 6 inches for every inch of water that enters soil beyond its holding capacity in silt or clay loam soils. In sandier soils, that movement is closer to 12 inches, however.

So heavy rainfalls will move nitrogen out of already saturated soils, but don't overestimate the rate, Nafziger said.

Denitrification is also common with saturated or flooded soils, but like nitrification, it requires warm soil temperatures.

"With soil temperatures in the 60s over most of the past month, we don't believe that denitrification has been a very large loss mechanism this spring," Nafziger said.

Don't rush to dump more nitrogen on your fields, Nafziger urged. "It's still premature to make a decision to put more nitrogen on right now, especially if you already put your full intended amount on," he said.

Keep in mind that just because nitrogen isn't in the top 2 feet of soil right now doesn't mean it's lost forever to your crop.

"As long as the excessive rainfall stops, water movement will slow down," he said. "Crops bringing up water later in the season might bring some of that nitrogen back to the roots and take it up."

If you farm sandy soils, or your fields stay pale well into June under improved soil conditions, that could be a sign that you need to address nitrogen loss, Nafziger said.

But provided better growing conditions develop, most growers won't see nitrogen loss symptoms before tasseling and will need to make decisions long before then.

"If someone is going out to do a pre-planned sidedress and puts 20 more pounds on, I think that's within the realm of reason if they've been very wet earlier," Nafziger explained. "But people deciding to put on another 50 pounds in a new trip after they've already applied 200 pounds -- that's a decision that should be made only after waiting to see what the crop looks like in mid-June, after plant growth has accelerated and roots are able to get to the nitrogen that's there."

If nothing else, Starkey thinks the shrinking planting window and the intense rain events he's seen recently are a strong argument to rethink nitrogen management.

He's moved all his nitrogen to planting and in-season applications.

"We need to manage nitrogen differently than in the past," Starkey said. "We don't put a drop of nitrogen down until we plant." Between in-furrow applications and a side-band mix, he puts down about 65 pounds alongside his corn seed.

He also comes back in with a sidedress trip of 65 pounds at V6. Sometimes he will add more at pre-tassel with Y-drops, but only if the fields look like they need it.

"It is scary to see so much nitrogen being applied pre-plant and then have these intense rain events that we can't control, where we lose a lot of nitrogen," he said.

He sees much more than lost money at stake.

"I'm concerned for the environment, the Gulf of Mexico and water quality," he said. "I don't want it to, but I worried it's going to come down to this [nitrogen use] being mandated."

See the University of Minnesota video by Carlson here: http://bit.ly/…. 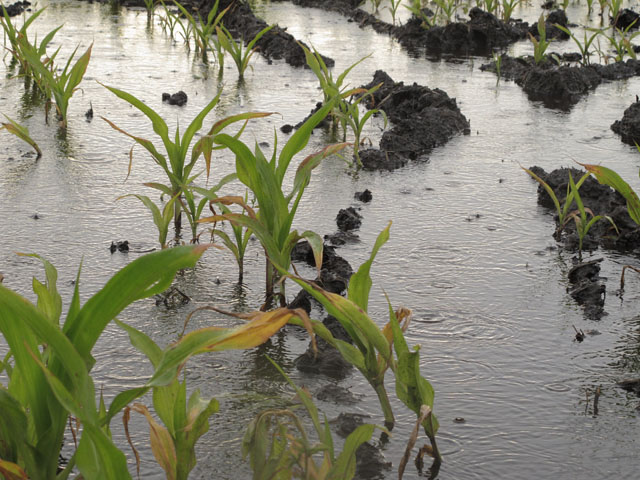