ROCKVILLE, Md. (DTN) -- The Corn Belt is in watch-and-wait mode.

Growers from Ohio, Illinois, Indiana and Missouri told DTN they were parking their planters and sprayers for a few days longer, after flooding and cold weather dominated the first half of the month.

In the meantime, they are watching April-planted corn and soybean plants slowly emerge from cold, soggy soils and calculating replant options.

"The next week to 10 days feature high pressure building over the eastern Midwest, offering warmer and drier conditions to form," Anderson said. "This does look better for planting progress along with improving conditions for [crop] development."

If you feel as if you've been trapped in a damp, dark ditch for two weeks in the Midwest, well, you're right, Anderson said.

"We've seen a stagnant upper-atmosphere, low-pressure trough over the eastern Midwest for the past couple weeks," he explained. "This trough has kept temperatures very cool and has allowed for moderate-to-heavy rain to cover much of the area."

"This trough is finally moving away from North America."

That move can't come soon enough for Ohio and Indiana growers, who told DTN their states have been at a planting standstill since April 28.

There has been zero planting in most of Ohio and northwest Pennsylvania these last 10 days from April 29 to May 8," said Loren Hopkins, who farms in northeast Ohio. "[We] will probably need another two to three days of drying before much gets done."

Keith Peters in central Ohio hasn't "turned a wheel since April 28." To his west, Jan Layman's fields near Kenton, Ohio, have suffered through 6 inches of rain, flooding and most recently, a frost.

In Indiana, some fields are still flooded where Scott Wallis farms in the southwest corner of the state. He estimated the most saturated fields are two to three weeks away from field work.

Farther west, in Illinois and Missouri, the drying process is farther along, but many growers are still leaving their planters and sprayers in the shed.

John Werries credits his use of cover crops and tiling for the fact that none of his fields flooded during a 6-inch deluge in late April and early May in west-central Illinois. But even those fields need another day or two before he'll venture back in with a planter, he said.

Dean Poignant's friend in central Illinois is finally ready to hit some fields, though.

"Some of his ponds are going down, so [he's] holding off with stocking bluegills in the corn field," Poignant joked.

As evidenced by a near-average planting pace in USDA's most recent crop progress report, a lot of corn and some soybeans went into the ground in mid-to-late April, before the cold front.

How is it faring?

Some is still sitting in the ground.

"My early corn and beans planted April 26 to 28 are close to coming out of the ground," said Hopkins of his northeast Ohio fields.

What has emerged has suffered from cold temperatures and cloudy skies.

A bout of hot, dry weather will do miracles on these sun-starved acres, many growers predicted. Already, a lot of Illinois corn is perking up and turning green after two hot days. Although fields remain wet, some growers found themselves in the odd situation of actually needing a shower to soften crusted soils so planted corn and soybeans could emerge.

Northeast Missouri farmer Clayton Kline has seen it all before.

"The corn that is up does look very pale and sickly," he said. "It is not unusual to see much of the early corn look this way for several days, yet these guys seem to raise decent corn each year. In this area it has become the norm to have a lot of corn planted in the first two weeks of April."

Some fields simply won't make it, however.

"Replanting is definitely in my future," said Peters. Fellow Ohio grower Jan Layman agreed, and said the only question now is how widespread it will be.

After 58 years of farming in southeastern Indiana, Gerald Gauck knows this lesson well.

"Early is not always best in our part of the country," he told DTN. "Patience is a virtue." 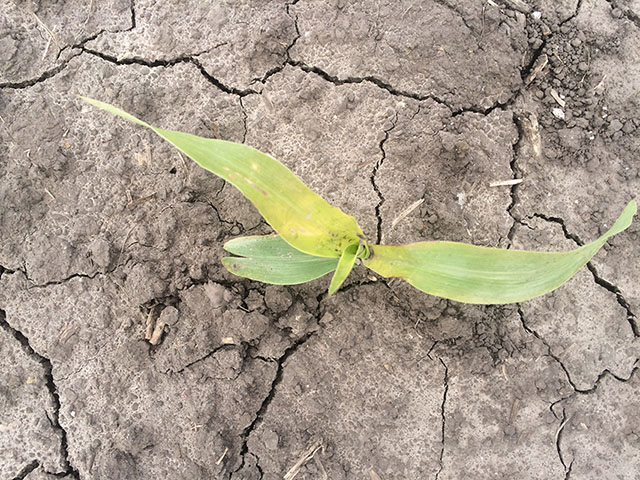