FMC has signed an agreement to acquire a substantial portion of DuPont's global crop protection research and development capabilities, as well as the company's global chewing-pest insecticide and cereal broadleaf herbicide portfolios.

DuPont Executive Vice President Jim Collins told DTN in a phone interview that the sale satisfies commitments to the European Commission for that commission to approve the merger with Dow Chemical. Once the merger is completed, DowDuPont will split into three separate, publicly traded companies focusing on agriculture, material science, and specialty products. Collins will be the chief operating officer (COO) of the agriculture segment once Dow and DuPont combine.

As part of the financial package, FMC swapped their $700 million Health and Nutrition business to DuPont and trued the sale up with $1.6 billion -- $1.2 billion in cash and another $400 million related to working capital. Collins said that acquisition from FMC fits into an existing DuPont business separate from the agriculture segment. The business includes a wide range of ingredients that make everything from yogurt to dog food more functional or nutritious.

Divestitures are commonly required in large deals to answer concerns over market power and consolidation within specific markets and industries.

After the acquisition closes, FMC Agricultural Solutions will become the fifth largest crop protection chemical company in the world, with an estimated annual revenue of approximately $3.8 billion. FMC has been realigning its business portfolio in recent years to expand its position in the crop protection market. In 2015, it acquired the multinational crop chemical company Cheminova.

From DuPont, FMC gets nine herbicide active ingredients and several promising candidates well advanced in the pipeline. Included in the deal is a selective insecticide portfolio including marquee products Rynaxypry and Cyazypr, which still have a long patent life ahead. FMC estimated those two products alone will generate over $1 billion in 2017 revenue.

Collins said the transaction also includes the majority of the DuPont crop protection R&D organization, including the main Delaware research operation known as the Stine-Haskell center and 14 field development and product testing locations around the world.

"This satisfies a big hurdle we had for the Dow merger and it creates a very pro-competitive environment with the establishment of a new R&D competitor in the industry. They [FMC] will be a strong No. 5 and possibly vying for that No. 4 spot," he said.

FMC said it expects the acquisition to generate $1.5 billion in revenue and $475 million of earnings before interest, tax, depreciation and amortization (EBITDA) this year.

"We'll still be about $8.1 billion associated with revenue from agrichemicals," Collins noted. "Add our seed businesses and we'll still be in the $14 billion to $16 billion of combined revenues post this remedy.

"People ask if this is all about getting bigger and part of it is really about the viability of this industry," he added. "It's about staying power and scale. When we combine, we'll be able to free up resources that today are not as productively used ... and that money can then be redirected back into the core of the business." He said those saving synergies might be deployed in further discovery of existing efforts or used to look more broadly at other crops beyond corn, soybean, cotton and wheat.

DowDuPont will continue to have a strong presence in fungicides and seed treatments, Collins said. "Even though this remedy took a little bit out of the business, I continue to be excited about our presence in a number of core markets," he added. He specifically mentioned a strong grass and broadleaf herbicide portfolio for corn and soybeans and the isoclast family of insecticides that Dow brings to the new partnership. Dow also had a cereal herbicide business, so that overlap has been eliminated.

The EU approval was a big hurdle for the DowDuPont marriage, and now cleared, Collins said meaningful conversations with other regulators around the world can continue. "We know these regulators talk a lot to each other -- they collaborate -- and this remedy from the EU is a very global remedy. We believe it will satisfy almost 100% all of the other regulator concerns that they might have. These would have been similar concerns in other markets," he added.

To accommodate the requirements of the FMC transaction, DuPont also announced Friday that their merger end date would be pushed back. The companies now expect the deal to close in August 2017. When the deal was first announced in December 2015, it was expected to close in the second half of 2016, but intense regulatory scrutiny has pushed back the calendar.

Collins noted that the remedy of allowing FMC to take this business must now be filed with various anti-trust commissions. "Just as with our original merger, they have to look at this divestiture and acquisition by FMC to make sure it satisfies our remedy and also does not create any other global competitive issues," he said.

Pending regulatory approvals, Collins said he expected the Dow DuPont merger to close by Aug. 31. DuPont's transaction with FMC is expected to close in the fourth quarter of 2017 and is subject to the closing of the Dow and DuPont merger.

Recent financial media reports have indicated that the German company BASF considered acquiring FMC over the past year and that FMC might still be a takeover target. In a press conference Friday, FMC officials would not comment on such speculation. However, they did confirm that they would not likely be acquiring additional properties from any divestitures that might come from the pending merger between Bayer and Monsanto. 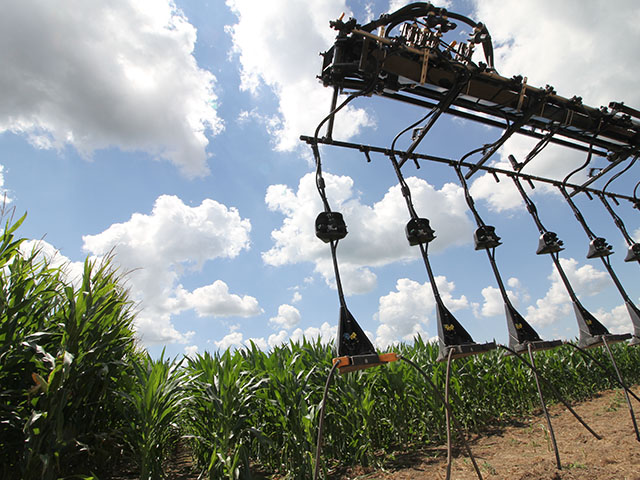