Brian and Bryce Irlbeck want cover crops up and growing well before corn harvest. To get that done, the Manning, Iowa, farmers have been trying the practice of seeding cover crops into standing corn at the V3 to V4 growth stage on a few of their acres.

"The cover crop will shrivel up during the summer, and there won't be hardly anything left there to see until the corn leaves start to turn brown in the fall," Bryce explained. "With more sunlight from an opened-up canopy, the cover crop takes off and really grows in the fall after harvest."

One knock on cover crops is there isn't always time to get them up and growing in time to do their work before winterkill. That's led farmers who like cover crops to experiment with interseeding them into small corn to lengthen the growing season.

"In 2015, we got a rain the day after interseeding and had a good stand," said Bryce's father, Brian. "But last year, we didn't get a rain for three weeks, and we didn't get a good stand." That's been their biggest challenge, getting cover crops to grow quickly without being shaded out by the corn.

In 2015, the Irlbecks checked corn yields and cover-crop growth on 10 interseeding trials with 20 different species. "Some species showed a 10-bushel increase over the check with no cover crops, and others had 5 to 10 bushels less than the checks," Bryce said. "Annual ryegrass, clover, African cabbage and radish grew better and made 10-bushel-higher corn yields -- that's where we're headed now, trying to find out which species grow best with corn and vice versa." Last year, the 33-acre corn-after-corn field that was interseeded had similar yields to Irlbecks' other corn fields.

For 2017, they're considering interseeding a 28-acre field a little later in the growing season to cowpeas. Bryce said he's also open to planting earlier than V3 if the weather is right. "It might even be an option to plant cover crops when we plant corn," he said.

Don Wirth has more than 30 years of experience growing and selling cover crop seeds from Tangent, Oregon. Sales growth in the Upper Midwest has been in cereal rye, because it's less likely to winter-kill than annual ryegrass. However, Wirth sees a future in annual ryegrass with interseeding. He began focusing on annual ryegrass as a cover crop for Midwest farmers in 2002 because of its deep, extensive rooting benefits.

"People choose radishes for cover crops to reduce compaction, but I don't think radishes can hold a candle to annual ryegrass for compaction reduction," Wirth said. "University of Kentucky researchers say ryegrass has the best shot at reducing fragipan effects, and I believe that from what I've seen."

Wirth thinks Midwest farmers have a good chance of getting benefits from a ryegrass cover crop with interseeding. "If you can get ryegrass to a 6-inch height in August in a mix with clover and kale, your diversity of species and the deep rooting of ryegrass will have already done a very good job," he said.

Interseeding has worked in Canada and is a priority for southeast Minnesota farmer and seed consultant T.J. Kartes. After Kartes and three neighbors interseeded 300 acres of various cover crops in 2015, Kartes followed up to interseed 425 acres of annual ryegrass in a mix in 2016. He has cover crops on all 900 of his acres and said he will never farm a bare acre again.

Kartes is looking at the practice as a way to take advantage of when the heat, moisture and light needed for cover crops to germinate and grow quickly are available. He believes in his northern climate, interseeding is a way he can get more plant diversity to build soil more quickly. Kartes likes the fact that only simple seeding equipment is needed and he can seed during a lighter workload period than in the fall, when most seed cover crops.

The Irlbecks invested $2,500 to modify an old John Deere Model B Van Brunt drill to seed cover crops between 30-inch rows in young corn. "We dismantled it and kept the box," Brian said. "We mounted the box on a Noble row-crop cultivator bar, put three disc openers between each row where the shovels used to be and fed them from the box. It's like we were cultivating in the old days, but we're putting seed into the ground instead."

The Irlbecks burn down cover crops ahead of planting and use a reduced rate of Balance herbicide preemergence. "If we back off too much with our preemerge herbicides, we get weeds. We're concerned about resistance and not getting the kind of weed control we'd like. It's something we're going to have to continue to address as we try to balance weed control against growth of interseeded cover crops," Brian said.

RYE IN THE ROTATION

The Irlbecks decided to try interseeding after they saw better soil structure from plant diversity and having something growing in the soil all year. They're convinced the improved soil structure is just as important as fertilizer in producing higher yields. "Cover crops open up the soil to let air and water in -- the two major things that promote nutrient availability," Bryce said.

"We started experimenting with cover crops about 10 years ago," Brian said. "Most of our first attempts weren't successful, but we kept trying. Right now, 100% of our cropland has some kind of cover crop."

The Irlbecks are working toward an equal amount of corn, soybeans and cereal rye in a crop rotation on their 900 acres. They sell the cereal rye locally for cover-crop seed and as grain to whiskey distilleries. "After our cereal rye comes off in late July, we have more than three months left in the growing season," Bryce said. "That's when we can go after plant diversity. Right now, we're using sorghum-sudangrass, peas, rapeseed, radish and sunflower. There will be some cereal rye coming back up, and we'll throw in soybeans or kale, or old corn seed, too." The Irlbecks baled the mix to feed cattle this winter.

"We're applying a total of 50 to 75 pounds of nitrogen an acre, about 50% of our total nitrogen application in the past," Bryce said. "This nitrogen balances our carbon-to-nitrogen ratio in the soil, which allows soil microbes to break down the previous cover crop and provide nutrients to the growing corn."

Seed treatments protect corn and soybeans early in the season, but they've backed away from traited corn. Bryce said their pest-scouting program shows that 10 years of cover crops and crop rotation is keeping corn rootworm and other pests in check without traits and insecticides, and that cuts corn production costs considerably. He has a long list of other benefits that include erosion reduction, spreading out workload, decreased equipment cost, diversity of markets and more wildlife.

Bryce thinks what he and his dad are doing enriches the soil quickly and is more sustainable than a corn/soybean rotation. "I haven't seen any crop system in this part of the country that I think is better at building soils on a large scale. We're putting 5 to 10 tons of dry matter back into the soil each year and turning that into organic matter and humus to feed soil life and plant growth," he said.

"Farmers who are aggressively tilling the soil are going backwards in regards to building organic matter and carbon in the soil. If you're tilling, you're losing carbon. We want to put carbon back into the ground. That's going to be the new era in farming." 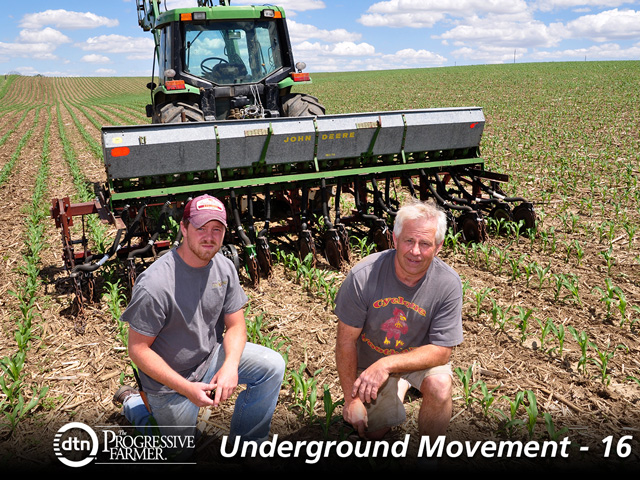