Some farmers may curse heavy clay soils, but the Toussaint family is finding a way to manage these tough soils using roots instead of iron. Cereal rye as a cover crop and a much wider crop rotation have allowed the Wahpeton, North Dakota, farmers to biologically improve the soil in just two years.

Before using cover crops and reducing tillage, the Toussaints' clay soils were hard to penetrate. Now, a shovel slides easily into tilthy soil and emerges with soil aggregates and earthworms.

Soil aggregates result from roots and microscopic fungal hyphae wrapping around soil particles and decomposed crop residue and other organic matter found in the soil. These aggregates that make the soil feel crumbly also create diverse pore spaces for water and gas exchange, along with hot spots for microbial activity.

If soil crumbles and falls off your hands, it's a good indication of a healthy soil, said North Dakota State University (NDSU) soil-health specialist Abbey Wick. "If managed correctly, clays can be great for building strong aggregates, which creates space for air and water. However, without aggregates, soil pore space in high-clay soils is too small to allow air and water to move through the soil efficiently."

Doug Toussaint farms with his sons, Nick and Brad, in an area where 90-day corn reigns and long, windy winters give way to extremely wet springs. Red River Valley rainfall often comes in extreme spring downpours, which run off hardpan clays, wasting valuable rainfall needed later in the growing season. The Toussaints don't pattern tile but use surface ditching and now an extended season where a plant is transpiring and removing water.

Two years of prevented planting with wet springs had convinced the Toussaints they were losing the battle with their 60%-clay soils. Things got worse with more chisel-plowing, and he had major water-ponding issues. After rains, soils could turn from gooey mush to hard as rock.

The pieces to solve these problems came together when they got involved with Wick, Hal Weiser, NRCS soil-health specialist and a group of 15 or so farmers who regularly gather to talk about how they use cover crops and no-till. This gave the Toussaints the partnerships and information they needed to try something new and transition their operation to no-till with a more diverse rotation and intensive cover-cropping.

"After attending the first few meetings, I told Dad, 'This won't work on our soils,'" Nick said. "But then, we met more people making it work on heavy clays like ours, and we came to see how it's improved them over time."

They started in one "nightmare field." This field had such mushy, sticky, awful clay that they considered giving the field up, as had many other farmers before them. "The soil surface would be dry but mushy beneath it, like pudding, anytime of year," Nick said. Each farmer who had rented the farm had different advice, such as: "Plow it every four years or deep-rip it," Nick said. "But, the solution was to quit tilling."

Spring 2014 was the first year the Toussaints put barley back in rotation on that difficult piece of land because they could seed it in late April before the clay soils thawed and turned to goo. They got a decent crop and had extra moisture to use after the barley crop. As a result, they allowed volunteer barley to serve as a cover crop that fall to anchor soil and nutrients through the long windy winter. It was their first step in a transition to no-till.

Since then, the Toussaints have gone "Zero to 100 mph with using cover crops and going no-till," Wick said. "They started on 160 acres in 2014 and then 480 acres in 2015, and now the whole farm. It's such a huge transition. They use cereal rye on all of their soybean acres instead of tillage passes, and they fly on cover crops into their corn," she explained.

"I had no idea that we would see such great changes in the soil aggregation after such a short period of time," Wick added. "That shows how resilient our soils in North Dakota can be and the importance of roots."

The Toussaints currently raise about 3,500 acres of corn, soybeans, sunflower, barley, winter wheat, spring wheat and cereal rye, and also have perennial reed canarygrass established on one of their fields. Cover crops are included in every part of their rotation.

The more diverse the mix of cover crops and cash crops, the better the whole underground system works. The Toussaints follow small grains with a multispecies cover-crop mix of varying root depths and growing seasons. In 2016, they developed their "go-to mix" of 2.5 pounds per acre of dwarf Essex rapeseed, 2.5 pounds of radish, 2.5 pounds of flax, and 52.5 pounds of cereal rye, creating a 60-pound-per-acre mix for $12.80 per acre. Dwarf Essex rapeseed is popular because it germinates quickly and suppresses weeds, and its long, fibrous roots leave about a 16-inch root channel that reduces soil compaction.

A winter annual such as cereal rye is a key part of that mix because it provides traction to drive on in wet springs and also uses up surplus spring moisture. Roots host arbuscular mycorrhizae, tiny fungi that extend roots' reach, snagging moisture and nutrients in return for nutrients from roots. So, more year-round roots develop more productive soils and more resilient soils in rainy and dry seasons.

The Toussaints have also experimented with a concept called "planting green" by alternating strips of cereal rye across their problem field. This set up a side-by-side comparison in the spring of 2015 to test planting soybeans into a living cereal-rye cover crop.

"I remember Nick pulling the equipment in the field to plant. It started raining, and I thought there was no way are we going to do this today," Wick recalled. "But the living rye gave him something to drive on, and it was no problem to get the field planted."

Throughout the year, Wick documented plant height, population and weed pressures in the rye strips to compare to non-rye strips.

Cereal rye's allelopathy (natural poison) is known to control early-season weeds, but this test proved the point. The number of weed plants was the same in rye or non-rye, but the weed biomass in the non-rye strips was 10 times that of the rye strips. Soybeans were taller in the rye strips because of competition for light, but generally, they were at the same growth stage as soybeans in the non-rye strips. The various strips' soybean yields were identical -- the ultimate proof of this approach.

Testing cover crops' pest and weed control in sunflowers was a major 2016 growing-season goal for the Toussaint family. Weed control came from cover-crop mixes crowding out weeds. Pest control resulted from cover crops flowering at different times to attract beneficial insects to feed on the pests throughout the growing season, Wick said. They were trying to use the flowering cover crops to avoid spraying an insecticide, but they didn't know which species to include or how it would work for their farm.

They chose six mixes to seed in 10-foot x 1/2-mile test strips on a couple of fields. Mixes generally included mustard, buckwheat, forage pea, phacelia, flax, common vetch, crimson clover, cowpea, radish and dwarf Essex rapeseed. Some mixes included oats, barley and millet. Mix costs ranged from $9 to $47 per acre. Doug figured you can easily spend $30 per acre to spray insecticide on sunflowers, so using cover crops would be a "wash" if this was a successful approach.

They invited NDSU entomologist Jason Harmon to scout their fields to help them identify which beneficial insects were in the field. Harmon found ladybugs (predatory beetles), syrphids (aphid-eating flower flies) and lacewings hanging out in the cover crops.

The Toussaints have soil pits around the farm to observe soil structure and rooting on the cover crops firsthand. Full-season cereal-rye roots extended 3 to 4 feet deep, breaking up hardpan layers, increasing aeration and water drainage, and building a bigger sponge to store water for late-summer reserve.

"I didn't have any issues combining the beans over the cover crops; it was a nice green mat under the crop," Brad said. "The header also pushed less because the green cover crop was attached to the soil, whereas with only dead material, it can bunch up in front or underneath the cutter bar and cause problems."

Over time, the Toussaints are seeing soil aggregates develop deeper in their soils, making clays more crumbly. The roots being established year-round create continuous pores from the surface down into the soil, building highways for water movement and to better manage water, Wick said. The greatest benefit of all is protecting the soil resource from erosion.

Topsoil is where soil aggregates are built, microbes live and organic matter accumulates. It is also the first soil fraction to blow or wash away if not protected by residue or a living plant. "As the topsoil layer gets thinner with erosion, I've seen more subsoil being mixed with topsoil with tillage, diluting nutrients, bringing up salts and more clay," Wick said. "Farming subsoil mixed with topsoil will never produce what topsoil alone can produce, no matter what you add to it," she added.

The Toussaints are taking soil-health management to the next level, NRCS' Weiser said. "This is what agriculture will need to remain economically viable and improve the resource for the next generation."

The Toussaints estimate reduced trips across the field saved them about $100,000 in 2015.

They saved about $30 per acre in 2015 equipment depreciation, labor (616 hours), fuel and maintenance from fewer field passes. Beyond those savings is another benefit: Doug Toussaint said he has never had this much fun farming. "This new approach to farming is working to manage soil moisture and erosion control, and I want to do this 100 mph."

Soil aggregates are vital building blocks to making soil more resilient and productive. These chunks, or aggregates, are held together by clay, microbial glues, fungal hyphae, roots and root byproducts.

Tillage appears to smooth the soil seedbed, but it actually disrupts soils' building blocks (aggregates), lowering soil productivity, she added. Without aggregates, soil pores get plugged, leave nowhere for water to go and don't allow air to penetrate the soil. 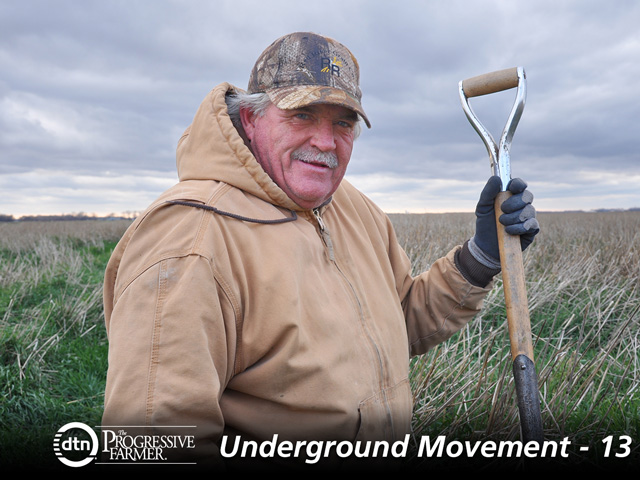