Some days, Matt Atkinson is a cowboy, and others, he's a crop farmer. Most of the time, though, he's both.

The link for the Columbus, Kansas, grower is cover crops. The Atkinson family's long-term continuous no-till system provides an opportunity to reap no-till benefits while delivering additional forage for its cow/calf enterprise.

"We're not a big operation, so we're trying to do more with what we have," he explained. "The emphasis here is on saving soil, but we can help accomplish that with cover crops that also provide hay or grazing for the cows."

He followed that with a glyphosate burndown prior to planting full-season soybeans. No additional nitrogen was applied ahead of the triticale. On 68 acres, he harvested 240 large round bales, each weighing approximately 1,200 pounds -- a little more than 2 tons per acre to help fill the forage gap while protecting the soil.

"It made pretty decent hay," Atkinson said. "It's probably not as palatable as our better hay, but the cows eat it. It may work best grinding and mixing it with something else."

In addition to keeping the ground covered over the winter, the young farmer believes the triticale provided some weed suppression ahead of soybeans.

After triticale harvest, Atkinson applied glyphosate and waited about 10 days before planting soybeans. The Group V beans, drilled on 7.5-inch spacings, were treated with a postemergence treatment of ammonium sulfate (AMS), Warrant and glyphosate.

RED CLOVER IN THE MIX

"We're trying to accomplish several things," Atkinson explained. "We want to keep the soil covered; we want to produce some quality forage for the cattle; and we want to more fully utilize our land. We also expect some soil-health benefits, including nitrogen for the following milo crop."

The first year, he took two hay cuttings, the first one being the wheat stubble/red clover mix. "We had to take care when we harvested the wheat," Atkinson said. "The clover was over a foot tall, so we cut the wheat as high as we could. And, the clover didn't seem to hurt the wheat yield."

This past summer, he got the three cuttings he was after, but a rain-delayed second cutting damaged the stand. "The third cutting was really a cleanup operation," he admitted. "Still, I think we'll see some soil and fertility benefits next spring before we plant corn or grain sorghum. We'll do some soil testing to find out exactly what we have and get a better idea of the clover's impact."

Although grazing out the red clover wasn't an option this past year since the field was rented and unfenced, Atkinson believes that will be a possibility in the future. "It's a system that gives us some flexibility."

The Atkinsons have some options to consider when it's time to terminate the red clover, Kansas State University agronomist Doug Shoup explained.

"They should see some nice yield benefits from incorporating legumes into a rotation," he said. "At the end of red clover production, though, the Atkinsons will have a decision to make on whether they want to maximize the nitrogen contribution of the legume."

Shoup explained that Kansas State's recommended nitrogen credit for a good stand of red clover is 80 pounds per acre if the legume is tilled in -- about half that in a no-till situation.

Additionally, since approximately half of the nitrogen contribution is above-ground, taking off a final red clover cutting would further reduce the nitrogen credit.

One option the Atkinsons may consider is to graze the final cutting prior to termination. That, Shoup said, would recycle much of the above-ground nitrogen back to the soil through the manure.

"It's a matter of balancing the economics of the need for hay versus getting the largest nitrogen credit possible," Shoup said.

The agronomist said there is another crop benefit from the clover.

"We've had three wet years in a row, and denitrification has been a big issue," he explained. "Organic nitrogen from the clover will break down and become available more slowly than commercial nitrogen. That means there should be a nutrient boost later in the growing season to help fill in the gap if nitrogen losses have occurred earlier."

His only caveat is that hay crops are big users of phosphorus and potassium, so they should keep an eye on those levels in the soil. 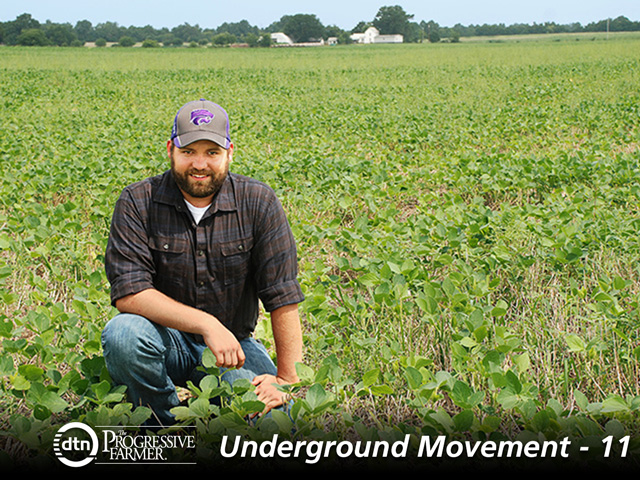