Roots are free insurance against weather extremes. They store nutrients and water, and loosen soil for better underground circulation.

Jerry and Nancy Ackermann take this information to the bank by rotating corn and soybeans with alfalfa. Its fibrous, perennial roots offer free nitrogen (N) and soil-aggregate-building action. The roots improve soil structure, water drainage and water storage for later in the season, and host valuable year-round nutrient-recycling microbes.

The Ackermanns farm 1,200 acres of clay loam and silt loam soils near Lakefield, Minnesota, in a one-third corn, one-third soybean and one-third alfalfa rotation. Their alfalfa is sold as tested, high-quality dairy hay.

The family has no-tilled corn into alfalfa for the past 15 years when rotating a field. They terminate the alfalfa after four years (excluding the initial seeding year). The decaying roots release more N and carbon into their Webster Clarion loam soils, in addition to what it fixed from atmospheric N during its growing seasons. They strip-till when planting corn following soybeans, applying only 5 gallons of 10-34-0 as starter, with no additional N for the first year of corn on land following alfalfa.

In corn following soybeans, they apply 40 pounds per acre N in the strip (strip-till) plus 5 gallons 10-34-0 at planting, and sidedress an additional 100 pounds N per acre at V4. They tested sidedressing an additional 50 pounds at tassel but saw no benefit to this split-N approach.

The University of Minnesota (UMN) verified the wisdom of the Ackermanns' system between 2009 and 2015, when it conducted three of 68 on-farm trials there. Led by Jeff Coulter, UMN Extension agronomist, and Matt Yost, USDA-ARS, they tested several N rates in corn following alfalfa, plus other factors such as N-application timing. A previous alfalfa crop typically provided all of the N required for a subsequent 200- to 240-bushel corn crop.

Alfalfa fixes 100 to 500 pounds per acre per year of atmospheric N, depending on soil type and other variables. Alfalfa also recovers excess soil nitrate, adds 50 to 150 pounds of N per acre per year to soil's organic-matter pool and maintains a high N concentration.

The Ackermanns interseed cover crops into V4 to V7 standing corn using a standard mix of cereal rye, purple top turnip, tillage radish and Dwarf Essex rapeseed. Cereal rye tends to be shaded out and not used when interseeding this early. When seeding in late August/early September as crops start to dry down, they exclude the medium red clover from the mix, as it needs more time to get started before frost.

Think of your soil as a sponge. Soil-health goals, put simply, work toward building a better sponge.

"You control your soil productivity through practices building soil organic matter. Organic matter is inherently linked to water infiltration and nutrient availability," said Jerry Hatfield, plant physiologist and director, National Laboratory for Agriculture and The Environment, based in Ames, Iowa.

Soil organic matter is worth its weight in gold in improved soil performance, explained Hal Weiser, Natural Resources Conservation Service (NRCS) soil-health specialist, Jamestown, North Dakota. "It can hold 10 times its weight in water. A 1% increase in soil organic matter in a silt loam soil increases water-holding capacity by 22,000 gallons per acre, or nearly 1 inch in [a] 1-acre furrow slice of soil."

You can't change the weather, but you can change cropping practices that boost soil productivity. Tillage, for example, is one of the few things under a grower's control that really affects soil productivity, Hatfield said.

"Your crop's photosynthesis captures solar energy and stores it in the underground carbon cycle," he added. Underground microbes store carbon as soil aggregates, but they're fragile. Tilling soil oxidizes that carbon, depleting the aggregate stability that gets you through droughts and floods.

"We can easily produce 300-bushel corn if we had our prairie soil systems," Hatfield continued. Prairie soils were productive because they had a large soil biological component that maintained aggregate stability and continual nutrient cycling to supply water and nutrients to plants during the growing season. Hatfield's National Lab grew 290-bushel corn in the 2012 drought year in a prairie system with the capability to extract moisture to 7 feet deep, he said.

"You double soil's water-holding capacity, as SOM [soil organic matter] increases from 1% to 4.5%," he cites as an example. "Yield variation corresponds directly to soil-water availability during grain fill. It hasn't required much water until tasseling. Most of the time, water availability under normal rainfall patterns accounts for 20% of corn-yield loss. We can manage this soil-water availability through conservation farming methods.

"In soybeans, you can gain or lose 40 bushels per acre during three weeks in August, pending your soil's capacity to hold that vital limiting 3 to 4 inches of water," Hatfield continued. "Water-storing soil resilience stabilizes yields. In the future, growing-season conditions will become less and less perfect, with more variable rainfall during the grain-filling period."

Cover-crop roots excrete carbon and sugars that feed soil microbes, explained Dan Towery, Ag Conservation Solutions, Lafayette, Indiana. "When cover crops die, their decaying roots feed beneficial microbes," he pointed out. "Carbon recycling by microbes and the glues they leak into soil help bind soil particles together in aggregates. Over time, this 'bigger sponge' can bank 3 to 5 inches of moisture in the soil profile for later use." 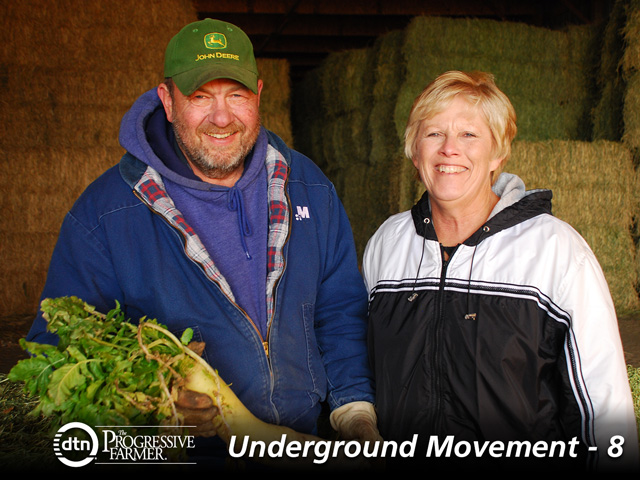