Leave it to farmers to find solutions to new problems. Take seeding cover crops into standing corn. Broadcast -- either by aircraft or from the ground -- is one solution. But what if you want to put seed in the ground rather than on the ground? For some, that might mean buying an existing seeder. For others, it might mean retrofitting planters, grain drills or air seeders to accommodate shallow direct injection of small grains and cereal seeds into the soil between rows.

While broadcasting tends to happen later in the season, the injection method occurs post-planting when corn is in the V4 to V7 stage range -- before a full crop canopy develops. The timeline is different for soybeans but must be done before full canopy.

Equipment manufacturers have taken a cue from farmer/innovators to develop prototype interseeders for the market. Farmer-built units often include a seed hopper attached to the toolbar of a crop cultivator fitted with rotary hoe wheels. The seed is blown directly in front of the rotary hoe wheels, which incorporate the seed into the soil. More sophisticated prototypes in development use existing air seeder technologies, planters or grain drills retrofitted to allow between-row injection.

Matt and Vic Henning, and neighbor Joel Hovland last year tested a prototype made by Hiniker Co. on their operations near Lakefield, Minnesota. The unit uses basic seeder technology on a skid system. Adam Hanson, ag sales coordinator for Hiniker, explained the eight-row unit features a totally redesigned compact hopper to deliver the smaller seed. The hopper mounts on a Hiniker toolbar, and seed is injected using disk openers. A chain drive from the hopper to a rear ground wheel controls the seed application rate. Metering and sensors are similar to those used with regular seeders.

The disk openers and closing wheels are mounted on two gangs between each row, offset from the previous year's no- or minimum-till stubble. The interseeder is set up with the two gangs for injecting seed on both sides of the old stubble row. A single gang on each end of the toolbar doubles back between the same two rows after each round.

Hanson said travel speeds can range up to 8 mph, depending on the size of the corn crop. However, speeds of 5 to 7 mph, as Vic Henning was operating, are more typical. "Eight miles an hour may be too violent for the young corn crop," Hanson said.

Seeding rate is determined using a gram scale. Hanson starts out turning the ground wheel 20 1/2 times, dispensing seed onto the gram scale, which totals an amount equal to 1/300th of an acre. The measurement in grams is multiplied by 300 and converted to pounds to determine the amount of seed per acre. From there, the rate can be adjusted to suit particular circumstances.

For Hovland, interseeding looks like the preferred method for seeding cover crops. Hovland uses the cover crop to extend his cattle-grazing season and has tried broadcasting from the air and ground. "You don't use as high a rate of seed with injection," he says. "Your soil/seed contact is improved, which results in better germination. Broadcasting doesn't work as well if you don't get a timely rain." 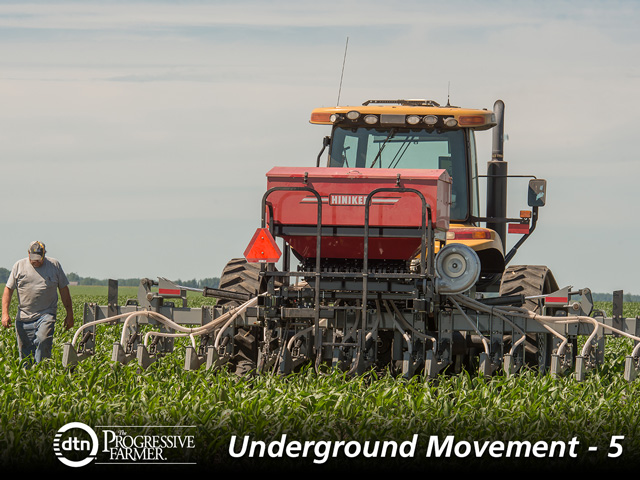