EDITOR'S NOTE: Dicamba herbicide use on soybeans and cotton is expected to expand dramatically in 2017. Stewardship will be critical to avoid drift and other movement onto sensitive crops and plants. This Dicamba Decisions series examines important application issues and the tough new federal label requirements of the new dicamba herbicides.

ROCKVILLE, Md. (DTN) -- Sprayer operators know it's important to measure and record wind speeds before applying herbicides. Those tasks will be more important than ever when applying newly labeled dicamba herbicides over Xtend crops.

When Missouri weed scientists polled more than 2,000 commercial and private applicators in 2016, 95% of them said they checked wind speeds before spraying the majority of the time. But when pressed on their method, nearly half of the private applicators relied on eyeballing their surroundings, such as trees, to estimate wind speed. More than a quarter of all applicators indicated that they use the closest weather station, such as an airport.

That's not going to cut it this year.

"Our recommendation is a handheld anemometer, period," said University of Missouri weed scientist Mandy Bish. Bob Wolf, owner of Wolf Consulting and Research, which specializes in pesticide application, is urging applicators to also bring along a compass or use a handheld device capable of measuring wind direction.

At issue are the detailed requirements regarding wind speed on the labels of the two dicamba herbicides -- Monsanto's XtendiMax with VaporGrip and BASF's Engenia -- as well as the fresh memory of legal problems caused by dicamba drift in 2016.

On top of federal labels are a growing number of more restrictive wind speed requirements imposed by states such as Arkansas, Mississippi and North Carolina. "Growers have to abide by whichever is most restrictive," Bish said of any differences between the federal label and state requirements.

CHECK THE LABEL -- AND YOUR STATE RULES

Three speeds will jump out at you when you check the federal label of Engenia and XtendiMax -- 3 miles per hour (mph), 10 mph and 15 mph.

Both labels permit spraying during winds between 3 mph and 10 mph, as long as a downwind buffer is obeyed. Between 10 mph and 15 mph, applicators cannot spray Engenia or XtendiMax if the wind is blowing toward neighboring sensitive crops, such as susceptible soybeans.

Both labels forbid spraying once winds exceed 15 mph. They also forbid spraying if winds of any speed are blowing toward neighboring specialty crops, such as many horticultural crops.

Bish analyzed wind speed data from southeast Missouri in 2015 and 2016 and found that sustained winds above 10 to 15 mph were actually quite rare when growers were applying in-season herbicide applications. "In June and July in southeast Missouri, wind speeds exceeded 10 mph less than 2% of the whole month for each month," she said. "In March, it was 17% of the time, in April, 10%, and in May, 7%."

A number of other states are still working on rules regarding the new dicamba herbicides, so all applicators should check with their respective state Plant Board or Extension weed specialists to get state-specific information before spraying.

The height at which a wind speed measurement is taken is key, which is why many scientists are championing handheld devices. Weather stations, such as those used at airports, generally take wind speed measurements too high in the air and too far away from your field to be accurate for a ground sprayer application.

Dicamba applicators' measurements need to be taken at boom height, in the exact field being sprayed, Wolf said. "Typically, we recommend to applicators that they measure that wind speed often," he said. "Depending on the size of the job it could be several times during the job or maybe once or twice."

Measuring wind direction will be equally important, since the dicamba labels have specific requirements for downwind buffers for sensitive crops, and even forbid spraying if the wind is blowing toward certain specialty crops.

If your handheld device doesn't record direction, Wolf recommends a flag attached to a stick, along with a compass. He urged applicators to "properly record the degrees on the compass to indicate the direction the wind is coming from so they can be well protected in a record-keeping process."

Bish also recommended taking a picture of the wind speed reading on a smartphone, so your evidence of label compliance will be time stamped and easily available. 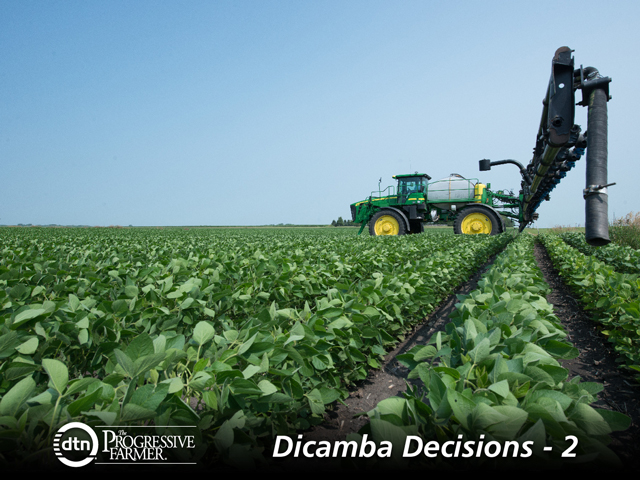