EDITOR'S NOTE: Dicamba herbicide use on soybeans and cotton is expected to expand dramatically in 2017. Stewardship will be critical to avoid drift onto sensitive crops and plants. This Dicamba Details series examines important application issues and the tough new federal label requirements of the new dicamba herbicides.

University of Missouri scientists have found that temperature inversions occur often and likely posed a greater risk for drift in 2016 in Missouri than initially assumed. The inversions occurred more than half of the days from March to July, almost exclusively in the evening hours of clear, windless nights.

At the same time, a survey of commercial and private applicators in the same state showed that many do not fully understand what a temperature inversion is and how to avoid spraying during one. "We need a lot of training focused on trying to educate them," University of Missouri weed scientist Mandy Bish said.

Temperature inversions were a significant contributor to the off-label dicamba drift incidents that caused problems in Missouri last year, Bish said. As more dicamba herbicides will be in use this year over Xtend soybeans, the stakes for avoiding drift are higher than ever.

"Because of the extreme sensitivity of soybeans [and other plants] to dicamba, it only takes a little bit of drift to become a major problem," she said.

As the sun heats the ground during the day, warm air rises and is replaced by cooler air, which in turn warms and rises. This continual motion keeps air moving near the ground, producing wind.

Sometimes, on very clear days, the air can become dangerously still. This happens most often as the sun sets and the ground cools and stops rising, resulting in a stable air mass hanging just above the ground, unmoving.

When growers spray during these conditions, the spray droplets cannot fall to the ground and instead hang, suspended in that air mass, until the inversion ends and wind arrives to move them -- possibly off-target.

"Across all growing seasons, from March to July, it looks like inversions occur at least half of the evenings at some point," Bish said. "We estimate that in the early part of season, they're mostly setting up between 5 and 6 p.m., and later, in June and July, they're setting up between 6 and 8 p.m."

HOW TO AVOID IT

In the past, scientists have pegged fog, dew or frost as signs of a temperature inversion. However, these are characteristic of morning hours, when temperature inversions are usually breaking up for the day, Bish said. Based on the new data, she wants applicators and growers to instead be on alert for clear, windless evenings.

Bish dug into her data and pulled out evenings when winds fell below 3 miles per hour (mph). She discovered that in June and July, over two years, these low wind speeds predicted the beginning of an inversion 90% of the time.

"When the wind dies down on a clear night, that's when it's time to stop spraying," she said. Other signs include dust or smoke hanging or moving laterally in the air.

For now, those indicators will be key, because measuring a temperature inversion properly is technically difficult. However, Bish and her colleagues hope to have a system to alert growers to inversion conditions in their area.

"We have nine crop reporting districts in the state of Missouri, so ultimately, we'd like to have station in each district," she said. 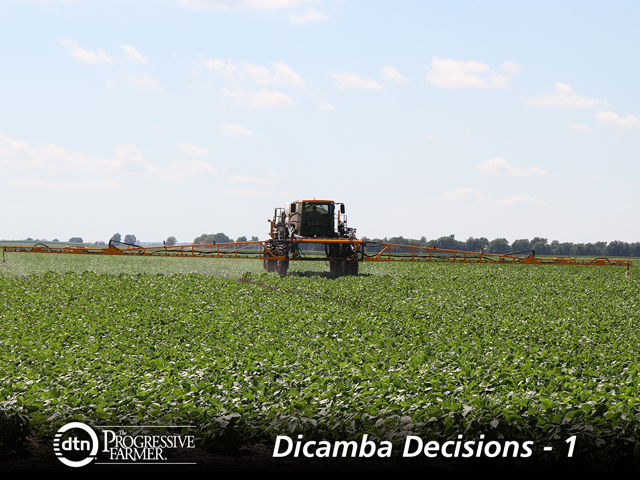