DECATUR, Ill. (DTN) -- Cotton growers are one step closer to another herbicide trait technology for use in 2017. The Environmental Protection Agency (EPA) has registered Enlist Duo, a premix of 2,4-D choline and glyphosate for postemergence use on Enlist cotton varieties, which will be available exclusively in Dow AgroSciences' PhytoGen cottonseed.

Once state registrations are received, cotton growers will have access to the system for 2017. However, Dow awaits import approvals from China in corn, and soybeans still need China and European Union (EU) approvals. Dow has waited to fully commercialize the Enlist trait in those crops until those approvals are received.

Enlist Duo was first registered in 2014 for use in corn and soybean crops genetically engineered to tolerate 2,4-D and glyphosate. At that time, the agency registered the herbicide in 15 states. EPA's most recent action also broadens that geography to another 19 states, and the total 34 states cover the majority of U.S. cotton, corn and soybean acres.

The Pesticide Action Network North America immediately reacted to the announcement, claiming the EPA is working quickly to "clear its docket" as a new administration waits in the wings. "Since Dow first petitioned the agency for registration of its Enlist Duo formulation, public outcry has been strong and steady. Hundreds of thousands of individuals, including scientists and farmers, have shared their concerns with EPA," stated a release from the group. PAN senior scientist, Marcia Ishii-Eiteman, PhD, issued the following statement in response:

"EPA's decision to expand use of Enlist Duo is deeply disappointing -- and the wrong move. In a misguided attempt to address the superweed crisis created by indiscriminate use of glyphosate on Monsanto's RoundUp Ready crops, the agency is simply pouring more fuel on the fire -- and again failing America's farmers and rural communities," she said.

EPA's statement indicated the agency did a comprehensive review for the initial registration of Enlist Duo and now again in response to the application to amend the registration. "EPA's protective and conservative human health and ecological risk assessments re-confirmed our 2014 safety findings. The pesticide meets the safety standard for the public, agricultural workers, and non-target plants and animal species, including a "no effects" determination for species listed as threatened or endangered under the Endangered Species Act," the agency stated.

Besides 2,4-D and glyphosate, Enlist cotton can also tolerate glufosinate, which gives growers three modes of action to battle tough-to-control weeds. Cotton growers were allowed to plant the trait in 2016, but had no registered herbicide available to use in the crop. John Chase, Enlist commercial lead, said the company received no notification of any illegal drift complaints last year, but are very aware of the concerns regarding off-target movement to sensitive crops and plants and the possible use of generic compounds.

Soybeans are inherently more tolerant to 2,4-D, and University of Missouri weed scientist Kevin Bradley told DTN it takes a very high rate of drift for the herbicide to cause injury to soybeans. "However, non-Enlist cotton varieties are very sensitive to 2,4-D, so off-target movement of 2,4-D to other cotton is a big concern," Bradley said.

Jonathan Siebert, Enlist field sales leader, told DTN in an interview that the company plans to price Enlist Duo in the $10- to $13-per-acre price range, depending on rate. "Additional incentives and rewards will also be available to growers," Siebert said. He added that competitive pricing is critical to making sure growers aren't tempted to reach for higher-volatility compounds, which would be a federal label violation. The company claims the new 2,4-D choline formulation reduces volatility by 96% compared to 2,4-D ester. They also maintain the new formulation lowers physical drift up to 90% when applied with appropriate low-drift nozzles.

The Enlist Duo label stipulates specific spray measures to mitigate drift concerns. Recommended wind speed is 3 to 10 mph and not to exceed more than 15 mph. Boom height must be 24 inches or less above the crop canopy, and water volume should be 10 gallons or more per acre. There are specific setback requirements to protect sensitive areas. Only specific nozzles can be used. See the product use guide http://bit.ly/…

Tank-mix partners must also undergo stringent testing to make sure they do not alter the volatility and drift components of the new formulation. Accepted partners are being listed as they go through the approval process at EnlistTankMix.com.

Growers should check for specific state requirements with regard to use of Enlist Duo. Some states are setting slightly different wind-speed requirements and require growers to have special auxin herbicide training. 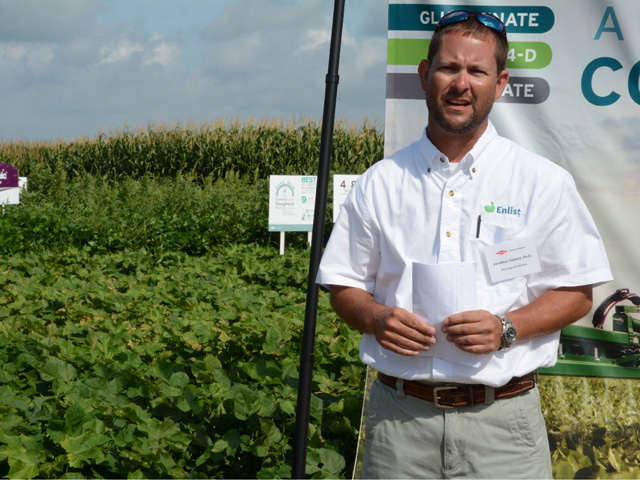