ROCKVILLE, Md. (DTN) -- Darwin's theory of evolution was on plain display this past year, as insects and weeds pushed many chemical and genetic crop protection tools to their breaking point.

A wealth of confirmed and suspected insect resistance to a number of Bt crops took many off guard in the 2016 growing season and is pushing growers to evaluate the way they use traits and inputs to ward off pests. However, scientists say the problem had been mounting for years.

"There is a finite limit to the addition of new Cry toxins and, because companies are licensing their technologies to their competitors, essentially our whole arsenal of Bt toxins is being planted on the vast majority of our corn and cotton acres," Texas A&M entomologist Pat Porter wrote in a university article reflecting on the inevitable march of insect resistance. "On a national level we are effectively selecting several generations of insects, even on different crops, on the same or similar toxins."

In the early summer months of 2016, Iowa and Minnesota scientists published their findings of resistance to the final two of the four available Bt proteins targeting the western corn rootworm.

The next year is unlikely to offer relief from these evolving insect populations. Many insecticides could be on the regulatory chopping block in 2017, and there are no new Bt traits on the immediate horizon.

The outbreak of insect resistance to Bt traits in 2016 prompted Porter to speculate that "the era of the Cry toxin seems to be ending." Companies would disagree with this assessment, but at the very least, farmers may have to re-evaluate their insect management plans carefully in 2017. Crop rotation, non-Bt crops and multiple modes of action in chemical insecticides will be more important than ever.

Herbicide-resistant weeds added new lands and new chemicals to their conquests this year. Southern growers continued to struggle with glyphosate-resistant Palmer amaranth, and added PPO-resistant Palmer and glyphosate-resistant Italian ryegrass to their growing list of problems. University of Tennessee weed scientist Larry Steckel estimates that 50% of the cotton in his state is now hand weeded. Liberty Link (glufosinate) remains effective, which makes it a useful but vulnerable tool if growers continue to depend on it, Steckel and other scientists have warned.

Until this year, field equipment and contaminated animal feeds such as cottonseed meal were considered the primary culprits in the spread of Palmer amaranth into the Midwest. In 2016, the weed found some alternate routes. Palmer amaranth seeds hitchhiked northward within contaminated native seed mixes used for newly planted Conservation Reserve Program habitat and pollinator plots. By fall 2016, 35 of 48 counties in Iowa, two counties in Illinois, two counties in Ohio and one county in Indiana had recorded the problem first on conservation program lands. The University of Minnesota also recently identified its first occurrence of Palmer amaranth in Minnesota, on land enrolled in the pollinator habitat program. University of Missouri weed scientist Kevin Bradley also confirmed that waterfowl are spreading Palmer amaranth in 2016.

Not all these Palmer populations are resistant to herbicides, but in September, Southern Illinois University weed scientists and researchers identified a population of Palmer amaranth with both glyphosate- and PPO-resistance.

Midwest growers have had to contend with PPO-resistant populations of waterhemp for many years, and populations with resistance to multiple herbicides are now the rule rather than the exception. In 2016, Illinois weed researchers confirmed a population of tall waterhemp that can resist five different chemical sites of action, including 2,4-D.

The Weed Science Society of America (WSSA) has launched a series of listening sessions on the issue of resistance. At the first meeting, held in Mississippi in December, Southern farmers reported that the cost of controlling weeds has capsized their budgets, as they face a season-long fight against driver weeds such as Palmer amaranth, marestail and Italian ryegrass.

Weed scientists left growers with a clear overall message for the years to come: The easy button [glyphosate] is broken. Answers can no longer come exclusively from the jug. Cover crops, mechanical seed destruction, crop rotation, tillage and a systems approach to managing weeds are now a reality. 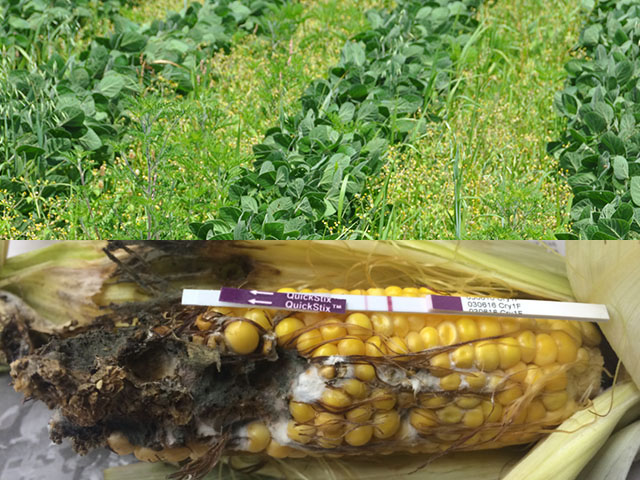