FORT LAUDERDALE, Fla. (DTN) -- New North American nitrogen production is beginning to hit the world market in 2016 during a time of oversupply, and it could take the global market a few years to balance out this new production.

New capacity, lower energy prices and currency devaluations have all combined to put significant pressure on nitrogen fertilizer prices, according to a fertilizer industry consultant.

Doug Hoadley, of Hoadley Consulting, said what happens in North America with nitrogen production in the coming years will have a large effect on the global fertilizer market and the new production will add to the oversupply. Hoadley gave a nitrogen outlook presentation at the 2016 Fertilizer Outlook and Technology Conference held last month in Fort Lauderdale, Florida.

"There are several key nitrogen drivers affecting the market currently, some good, some not so good," Hoadley said. "In addition to the new North American supplies, you also have low grain prices slowing the demand growth, a collapse in energy values, plus currency devaluations resulting in lower costs for marginal nitrogen producers."

World nitrogen demand shows a consistent growth of about 2% a year. The world nitrogen capacity growth should slow after 2017 once the new North American production is on the world market, he said.

The oversupply situation has pushed nitrogen prices to seven-year lows. Despite this news, the U.S. nitrogen fertilizer demand is forecast to decline 1% to 2% next year. The 2015/2016 estimate is 13 million tons and the 2016/2017 forecast would be just slightly below this level.

With this new North American nitrogen production, this will certainly change some aspects of the U.S. production. Specifically, new production will most likely displace some U.S. imports in the coming years, he said.

"Who is most affected by these declining imports?" Hoadley asked. "That would be Trinidad mainly."

The new U.S. production also affects urea and UAN imports. These products will displace about half of the current imports by 2017/2018, he said.

In additional to changes in ammonia, urea and UAN imports, there will be more U.S. nitrogen exports.

The ammonia export forecast in 2016/2017 shows the U.S. could double its exports compared to 2015/2016, he said. There is some question if the U.S. would see urea exports increase, but much like the large increase in ammonia exports expected, the same will be seen in U.S. UAN exports.

"New North American production will result in lower ammonia, urea and UAN offshore imports but imports will continue," he said. "U.S. offshore exports will expand for UAN and ammonia and probably urea."

In an Integer nitrogen outlook webinar on Nov. 23, Laura Cross, nitrogen research manager, also said the nitrogen market is in an oversupply situation, which lowers the world price. Cross said the market still needs more time to correct this oversupply state. Normally, it takes seven to eight years to pull production out of this type of price cycle.

"Being in a market supply phase, we had the double impact of the collapse of energy prices and all of these factors has a detrimental impact on what is happening with pricing," Cross said.

She added there could be some possible changes coming that could limit world nitrogen supply in the coming years, but it will take some time to affect the market.

Among the changes that could affect the oversupply situation is re-routing of supply across the world, with North America becoming a bigger player in meeting global needs.

The most obvious change that will be seen in the coming year will be the additional supply, which will come from North America that invested in production facilities because of the region's low natural gas prices. This area has gone from one extreme to the other: 15 years ago, nitrogen plants were closing due to high gas prices, she said.

"In this low price market, (North America) remains the only place where investment is still happening," she said.

In the medium-term nitrogen outlook, the market is already seeing some production cutbacks with the first signs of high-cost producers stopping or limiting production, according to Julia Belyaeva, Integer Research nitrogen analyst, who also presented on the webinar. There are wide variations in the different regions across the world as producers have different input costs, as well as variations in costs with different nitrogen products, she said.

"The value of some products like ammonium nitrate and UAN fell more than other premium products such as urea and ammonia," Belyaeva said.

The profitability of UAN producers in the U.S. improved most significantly in 2015 compared to products worldwide because of the low cost of input prices such as natural gas prices, she said.

Belyaeva said nitrogen producers in China, Ukraine and central Europe are at the most risk of limiting or stopping production as this current cycle continues. Higher prices of natural gas and issues with gas supplies in these regions could lead to some production decreases there in the coming years, she said.

"The U.S. will add some additional tons to the global supply, and so we expect prices could fall heading into the first part of 2017," Belyaeva said. 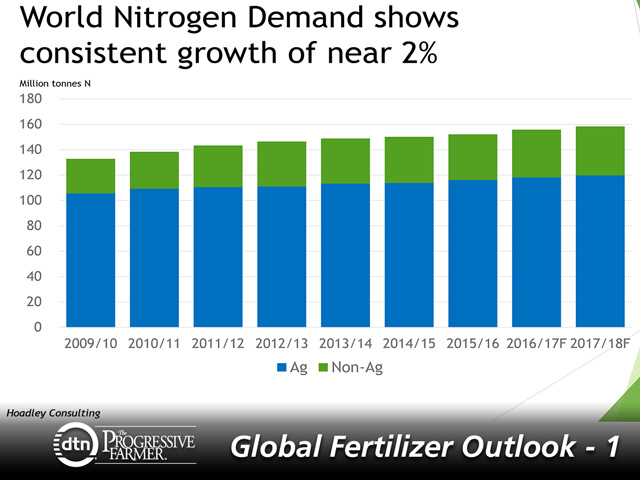