Two Bt traits are labeled to control the pest, Herculex I (Cry1F) and Viptera (Vip3A). However, Cry1F is under fire from scientists and farmers, after the trait failed to protect many cornfields against western bean cutworm (WBC) damage in Indiana, Michigan, Ohio, and New York this year. Entomologists from those states released a strongly worded letter, demanding that the seed companies that sell or license this trait remove western bean cutworm from the label's list of controlled pests. (See the letter here: http://bit.ly/… and DTN story here: http://bit.ly/…).

Dow AgroSciences and DuPont Pioneer, the co-registrants of the trait, maintain that these failures are the result of regional and sporadic populations of WBC with reduced sensitivity to Cry1F, and not a complete collapse of the trait's efficacy against the pest.

They will not change Cry1F's label, but representatives from both companies told DTN they will tweak 2017 marketing literature language in response to the scientists' complaints.

The companies are not required to change the label in the face of insect resistance, unless directed to do so by the Environmental Protection Agency (EPA), which oversees trait labels. In the past, EPA has set a precedent of not requiring companies to remove an insect from a Bt trait's list of controlled pests, even after resistance has been documented in the field.

THE UNCHANGING FACE OF A TRAIT LABEL

What the scientists asked of seed companies -- to completely remove their claim of control of WBC by Cry1F -- is unlikely to be echoed by the EPA.

For comparison, despite documentation of western corn rootworm resistance to the Bt trait Cry3Bb1, the agency has left that Bt trait label untouched. "Although field failure and resistance to Cry3Bb1 have been documented in areas of major corn growing states, there are still areas in the U.S. where Cry3Bb1 controls corn rootworm (CRW)," EPA told DTN in an email. "Because the trait is still effective in some areas, no label changes were made."

Instead, the agency created a resistance management plan to slow the spread of rootworm resistance and directed companies to beef up their education efforts on avoiding insect resistance.

Even this level of EPA involvement may not be triggered in the case of Cry1F and western bean cutworm, however. Because this insect was never considered a primary pest of Cry1F, companies face lighter requirements to monitor and control its resistance. For a primary pest of Cry1F -- such as European corn borer -- Bt registrants are required to monitor resistance each year, submit annual reports on these efforts and report any cases of field resistance to a trait, the EPA noted.

"For other corn pests that are not primary target pests, including Western bean cutworm, EPA reviews public literature and other reports from extension entomologists and crop protection experts," the agency wrote.

EPA said it was "concerned about reports of Western bean cutworm resistance to Cry1F corn" and "is currently evaluating the entomologists' open letter (and other information on potential Cry1F resistance) and is working with the affected registrants (Dow and Pioneer) to make any necessary changes to the registered products, product user guides and best management practices."

For now, both Dow and Pioneer are adjusting their descriptions of Cry1F in their product use guides for the trait. This summer, Pioneer downgraded Cry1F's rating for WBC from "very good" to "moderate" for the 2017 season.

"I would categorize 'moderate' as meaning moderate levels of plant protection and that Cry1F may provide plant damage suppression rather than control" under low to moderate insect pressure, Pioneer's strategy lead for insect resistance management, Clint Pilcher, told DTN. "This is a pest you need to scout for; you need to get out and monitor for it, and our field materials have been updated to reflect that."

Dow's current product use guide currently lists western bean cutworm as a "primary pest controlled" by Cry1F. The company hasn't finalized its wording for the 2017 season, but Dow's biology team leader Brad Hopkins said it will not reflect the strong language of the entomologists' letter. There, the scientists promised to "classify Cry1F hybrids for WBC the same as non-Bt, Cry1Ab, or double/ triple pro hybrids, all of which provide no control" in their grower meetings this winter.

"We have a little disagreement with them about a complete failure of the trait," Hopkins told DTN. "We don't think that's an accurate portrayal. In areas with high pressure, where they have some reduced sensitivity to Cry1F [in WBC], growers will require additional management practices," he said, and the product use guide will use language like that in 2017. In the states where the trait was compromised this year, Dow will urge growers to consult with their local and regional seed representatives for a course of action, he added.

(Cry1F is also sold under other companies' brands, since most seed companies license the trait from Dow and Pioneer. Those brands include Smartstax (Monsanto and Dow) Powercore (Dow), most Acremax (Pioneer) hybrids and many Agrisure (Syngenta) hybrids. Many regional corn seed companies also license and sell the trait.)

Both Pilcher and Hopkins contend that Cry1F is still extremely effective against western bean cutworm in farming regions beyond Nebraska, Michigan, southern Wisconsin, northern Indiana, northern Ohio and Ontario, where significant WBC damage has been documented this year and in the past.

Hopkins declined to name specific regions where the trait was still holding up against WBC, because it is a sporadic pest and does not occur consistently every year in some places. Pilcher identified the "central Cornbelt" as a region where the trait is still effective against western bean cutworm.

Entomologists in Iowa and Illinois noted that the western bean cutworm has been such a rare insect in those states in recent years that it would be hard to prove that Cry1F is ever challenged by the pest there.

"We get very, very little western bean cutworm moths in our traps," said Kelly Estes, agricultural pest survey coordinator for the Illinois Natural History Survey. Iowa State entomologist Erin Hodgson said she has "rarely encountered" the pest or reports of it from field staff and farmers.

The entomologists from Michigan, Indiana, Ohio and New York maintain that the trait doesn't work against significant populations of the pest. "We know that where we have western bean cutworm, and where we know that there were egg masses, that Cry1F has trouble," said Chris DiFonzo, Michigan State University entomologist, who spearheaded the letter written to seed companies.

You can find the Dow AgroSciences' product use guide here: http://bit.ly/….

Emily Unglesbee can be reached at Emily.Unglesbee@dtn.com. 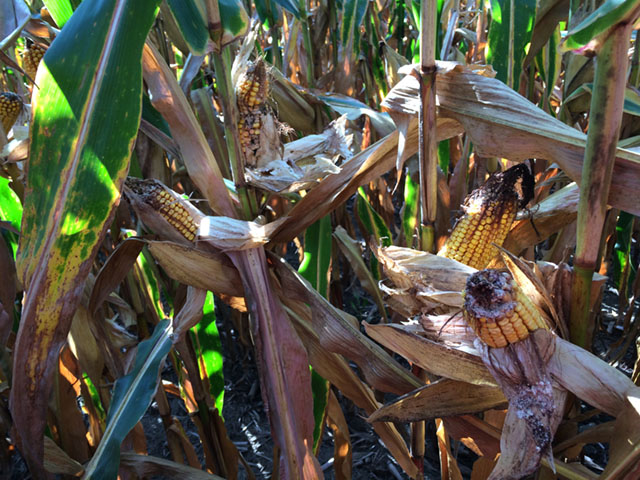