Editor's note: This story was updated with a statement from Dow AgroSciences at 12:50 p.m. CDT. The original story was posted at 8:38 a.m. CDT on Wednesday, Oct. 5.

Cry1F is used extensively as an aboveground trait among the major seed companies and across multiple brands, including Smartstax (Monsanto and Dow) Powercore (Dow), most Acremax (Pioneer) hybrids and many Agrisure (Syngenta) hybrids. The technology is also licensed to many regional corn seed companies.

Led by Michigan State University entomologist Chris DiFonzo, a group of six entomologists from Michigan, Ohio, Indiana, New York and Pennsylvania have released a letter asking Dow and its licensees to change marketing claims and label language to reflect the widespread failures of Cry1F on this particular insect in these states in 2016.

"This trait has now undergone a major test against western bean cutworm, across millions of acres and different biomes and I think it's failed," DiFonzo told DTN. "After hearing from many voices from the field, we have taken the unusual step as a group to recommend, in writing, that seed companies take a serious look at the failure of the Cry1F Bt trait on western bean cutworm, before sales ramp up for 2017," DiFonzo went on to write in the letter released late Tuesday night.

Dow AgroSciences released a statement to DTN from biology team leader Brad Hopkins confirming that some of their growers have reported "greater feeding damage than in past years under high-pressure conditions and reduced sensitivity of the pest to Cry1F." The company maintains that Cry1F is "an additional tool" for managing western bean cutworm, but added that growers who saw damage this year should consider adding moth flight monitoring, pheromone traps, scouting and insecticide applications to their management plan for the pest in the future.

The letter DiFonzo released was originally sent to Dow in early September. "There was no response for weeks," DiFonzo said. Finally, company representatives arranged a breakfast meeting with several field crop entomologists as well as a DuPont Pioneer representative at the Entomological Society of America's annual meeting in Orlando, Florida, on Sept. 29.

Once there, Dow and Pioneer representatives acknowledged reports of Cry1F failures against western bean cutworm, said Ohio State University Extension entomologist Andy Michel, who was present at the meeting. "We did not get any denials that the trait was failing," he said.

The companies' representatives told the entomologists that it was difficult to make label change, but Pioneer had plans to downgrade marketing descriptions of Cry1F's control of western bean cutworm to "moderate levels of protection" in the trait's "product use guide," said Ohio State University entomologist Kelley Tilmon, who also attended the meeting.

The entomologists were not impressed.

"It doesn't seem like it has any teeth to it," Tilmon said of the new language. "What does 'moderate' mean, when in some places it doesn't work at all?"

The company representatives also stressed that western bean cutworm was not designated as a primary pest of corn, but rather a secondary pest, a categorization that DiFonzo disputes.

"If this is a secondary pest, why is it taking up a primary amount of my time?" she said. "Why is this a primary research area for scientists in Ontario and Michigan? Why is it a primary source of our Extension phone calls?"

DiFonzo and the other entomologists said they were flooded with reports of severe western bean cutworm infestations this summer in Herculex-traited corn in Michigan, Indiana, Ohio and New York. The ear damage has created some serious ear mold and grain quality issues, Michel said.

Michel ran genetic strip tests on many samples of the WBC-damaged corn and confirmed that they were expressing the Cry1F protein and were not non-Bt refuge ears.

"For our purposes, we're treating Cry1F as something that is not going to work for western bean cutworm control, and we will tell farmers that if you are using Cry1F, you still have to scout your fields and use insecticides, because there is the potential for heavy feeding," Michel told DTN.

The entomologists' letter drove this point home: "...our extension recommendations (including the Handy Bt Trait Table) will be changing to classify Cry1F hybrids for WBC the same as non-Bt, Cry1Ab, or double/ triple pro hybrids all of which provide no control [of western bean cutworm]."

Many corn growers in northwest Ohio, where the damage was worst, are scrambling to lock down hybrids with Syngenta's Vip3a protein (Agrisure Viptera), the only Bt protein currently on the market that is still effective against western bean cutworm, Michel said. But Viptera hybrids can be hard to find in the Great Lakes geography, he added.

When Cry1F was first released in 2001, it was not labeled for use against the western bean cutworm, which was a pest mostly limited to the western fringes of the Corn Belt, DiFonzo recalled.

Over the next decade, the pest began to move deeper into the Midwest, eventually establishing itself as a threat to cornfields as far east as New York and Pennsylvania and as far north as Ontario.

In reality, the trait was never very effective against western bean cutworm, entomologists told DTN. For the past three years, Michel said he has seen steadily increasing damage on Herculex corn from the pest.

The widespread damage found in 2016 could have been exacerbated by the use of 5% or 10% refuge-in-a-bag hybrids, which allows insects to feed on a mosaic of Bt and non-Bt-traited kernels of varying toxin strength, DiFonzo noted. No research yet exists to prove this, but the industry practice of RIB has been shown to accelerate Bt resistance in ear feeding pests -- see DTN's coverage of this phenomenon here: http://bit.ly/….

You can find the entomologist's letter to Dow and the industry on Cry1F here: http://bit.ly/….

You can find the Handy Bt Trait Table, which will soon be revised to reflect the Cry1F failures, here: http://bit.ly/…. 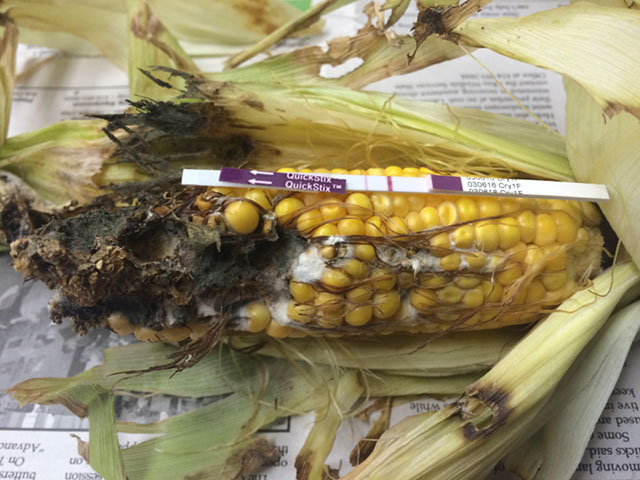