ROCKVILLE, Md. (DTN) -- Concerns over the role neonicotinoids may play in pollinator health issues have prompted the governor of Minnesota and the state's Department of Agriculture (MDA) to propose sweeping restrictions to neonicotinoid use that are unprecedented for U.S. growers.

Neonicotinoids are a class of chemicals most commonly used in seed treatments to control a variety of soil and foliar insect pests in field crops such as corn, cotton, sorghum, sugar beets and soybeans. The MDA launched a special registration review of neonicotinoids in November 2013, after prompting from the state Legislature and the state's Commissioner of Agriculture.

With the review now finished, Governor Mark Dayton issued an executive order on Aug. 26 outlining 10 "action steps" from the review for the MDA to take, many of which will require new legislation and could seriously restrict when and how often Minnesota farmers can use neonicotinoids.

First, the MDA will seek authority from legislators to regulate seeds treated with neonicotinoids. Currently, treated seeds are considered "Treated Articles" and not pesticides under the Federal Insecticide, Fungicide, and Rodenticide Act. That exempts them from pesticide regulations by the EPA or any state agriculture department.

The MDA will try to create a "Treated Seed Program," which would "provide the State with the authority to regulate seeds treated with pesticides, fund research to develop need-based recommendations for the use of seed treatments, and may require that untreated seeds and seeds treated at lower pesticide application rates are available in the market."

Because of this current limitation, the governor's other seven action points apply only to foliar applications of neonicotinoids for now, noted Minnesota Soybean Growers Association research director David Kee, who recently confirmed this distinction with an MDA official. "The legislation has to be acted on before seed treatments come into play," he said.

The review's third action point will require that farmers prove their need for neonicotinoid applications before they can use them. "Under these requirements, farmers would be able to apply neonicotinoids when the application is needed because of an imminent threat of significant crop loss, consistent with an IPM plan, or when a predetermined economic threshold is met," the MDA stated in its review. "However, what qualifies as an imminent threat or an adequate IPM plan requires further definition for Minnesota specific conditions."

The uncertainty around how this would be enacted or who would be qualified to verify a farmer's insecticide needs is of great concern, said Kee. "The last thing farmers want is to have a government employee come to their place and tell them whether or not they have a need," he said. "And for pests like the soybean aphid, which can double its population in two days, farmers don't have a week to wait around."

Another action point ordered an increase in MDA use inspections for insecticides that are classified as highly toxic to pollinators. The eighth and final action point directed the MDA to review product labels for neonicotinoids, and perhaps revise the language and instructions on them. "Some insecticide products that are acutely toxic to pollinators have language that is unclear or may be interpreted as advisory rather than enforceable," the MDA review noted. "The MDA will review label language to ensure that label requirements for neonicotinoid products are appropriate for Minnesota specific conditions and are clear, unambiguous and enforceable."

Commodity groups have already spoken out against the action steps, while environmental groups have celebrated them. "We understand the concerns involving pollinators and neonics," Minnesota Soybean Grower Association President Theresia Gillie said in a statement. "However, we are troubled the Governor has politicized this issue and didn't consult with affected producers."

"Today, Minnesota set the strongest rules in the nation to protect pollinators from pesticides," countered Lex Horan, organizer of Pesticide Action Network. "The plan will help ensure that bee-harming pesticides won't be used unnecessarily, and it lays the groundwork for reducing the use of neonicotinoid seed coatings," he said in a PAN press release.

State experts and scientists are scrambling to interpret the proposed new rules in the meantime. "We are holding a meeting this week ... in light of the Governor's executive order," University of Minnesota entomologist Ken Ostlie told DTN in an email. "Our intent is to clarify understanding of this order and state agencies' roles, develop a comprehensive integration of relevant neonic research, discuss the order from constituent perspectives, forge potential actionable steps and identify data gaps that limit our understanding and resolution of this issue. The result will be a clearer vision of what University of Minnesota Research and Extension expertise can be applied to this challenge."

In the 120-page review that prompted these action steps, the MDA scrutinized neonicotinoid chemistry, registration policies and the chemical's use and sales in the state, along with the environmental effects, risks and benefits. Currently, 510 neonicotinoid products are registered in the state to control soil pests such as wireworms and seedcorn maggots and foliar insect pests such as aphids, plant bugs and corn earworm.

The review writers expressed concerns about pollinators' access to neonicotinoids via residues in pollen and nectar as well as dust-off from treated seed during planting and foliar insecticide drift. Foliar treatments are of special concern, given that a "review of several studies revealed that foliar or soil treatments closer to blooming resulted in higher concentrations of active ingredients in pollen and nectar of plants as compared to the seed treatments," they noted in the report's executive summary.

The review writers cited the EU's two-year moratorium on the chemicals, as well as Ontario's new laws restricting the use of neonicotinoids, which went into effect in July 2015. Growers in Ontario who wish to use neonicotinoid seed treatments must prove they have a pest problem before they can buy seed treated with the chemicals. The Canadian province hopes to reduce neonicotinoid use by 80% by 2017. Across Canada, growers face another requirement to use a Bayer-produced seed lubricant called Fluency Agent, which is designed to limit the amount of neonicotinoid-tainted dust that has been shown to leave the seed during planting.

While this review and action steps only affect Minnesota farmers for now, the EPA is currently reviewing the registration of all neonicotinoid products on the market, including imidacloprid, clothianidin, and thiamethoxam. The agency expects to finish those reviews in 2016 or 2017.

You can find the MDA special registration review of soybeans, along with the action steps, here: http://bit.ly/….

You can find the EPA's schedule for registration review of neonicotinoids here: http://bit.ly/…. 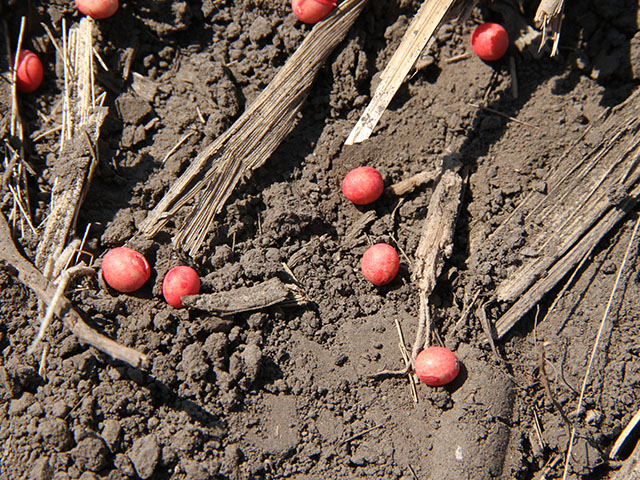