BROWNSBURG, Ind. (DTN) -- Mike Starkey is geared up to give his corn another spoonful of nitrogen (N) this week. Splitting nitrogen applications to get it to the plant when it needs it most has been a calculated management move for the Brownsburg, Indiana, farmer.

"Today's high-yielding hybrids need more N on the back end. Tests have shown that up to 75% of N is used after V-10. We're able to do that with a high-clearance sprayer and new Y-drop nozzle technology," said Starkey, who farms with his nephew, Jeff.

Being able to put on that late shot of N was a big plus in 2015 when 10 straight days of rainfall locked him out of prime sidedressing time in June during the V-4 to V-5 growth stage. Using 360 Y-Drop nozzles and a high-clearance sprayer allow the flexibility to apply the additional N needed in tassel-tall corn.

Nitrogen fertilizer costs are one of the largest variable production costs for corn. The old practice of applying "more than enough" N as insurance to get through the season is no longer financially or environmentally responsible, noted Purdue University agronomists Jim Camberato and Bob Nielsen in their report on a 10-year nitrogen management study in Indiana. Read it here: http://bit.ly/…

Starkey said it has taken him years of studying replicated strip trials and comparing N amounts, application timing and tracking yields by soil type to grow more confident about spoon-feeding nitrogen for optimal yields without over-applying. In the process, he's reversed his thinking on some fertilizer rules of thumb and learned to rely on his own data more than general recommendations that aren't specific to his farm and soils.

"I don't apply any nitrogen in the fall or pre-plant, but put on the first dose with the planter," said Starkey. "This consists of 12 gallons of High NRG-N with 3 gallons of Access (sulfur source) from Agro Liquid. I don't inject or have fertilizer coulters on the planter and put it on the side of the seed trench on top of the ground. The stabilized formulation isn't as volatile as 28% and breaks down slowly before sidedress time. Starkey also applies 5 pounds of nitrogen in-furrow in a 9-24-3 (nitrogen, phosphorus and potassium plus micronutrients) mix.

The 2015 experience has given them confidence not to panic over the sidedress application window. "We planned to sidedress at V4 to V6 and again at V10 to V14, but that first sidedressing didn't happen on a lot of our corn," Starkey said. "It was amazingly wet. There was a lot of drowned out and yellow corn in this area because farmers lost a lot of N from fall application and/or spring pre-plant and couldn't get in the field to sidedress. But I wasn't stressed and neither was our corn -- that N we put on with the planter kept it green through a really wet period."

This year he was able to get the early split application finished. Only 80 feet of the 120-foot boom on the R4030 John Deere sprayer can be used for the Y-drops, but it still covers 32 rows with each pass. "We fertilized 500 acres in a day, and the sprayer destroyed less corn on end rows than the tractor and tank we use for our early sidedressing," he said.

"The Y-drops place the nitrogen [32% and Thiosul] next to the corn rows, and I noticed a quicker response than from the nitrogen we put on between the rows with our early sidedress bar. Any yellow corn greened up a lot faster with the Y-drop applications -- the corn roots just didn't reach out to the middle of the row for that nitrogen," he said. Starkey likes the system so much, he traded his sidedress bar this week and plans to use the nozzle system for both split applications.

Starkey uses test strips to guide the amount of nitrogen that goes on with both his planter and later applications. "Our sweet spot to optimize early N with the planter is 50-60 pounds of N, but it really depends to what cover crop we have ahead of planting and if we plant into that cover crop green or if it is terminated early on," he said. "Then, we adjust sidedress by zones we've identified according to soil type, drainage, and fertility. We observe them each year and come to learn it's the 300-bushel zones you want to feed.

"Years ago, I was taught that there's not as much residual nitrogen on lighter soils, so that's where you ought to add more N," Starkey said. "But as I've done replicated strip tests and tracked yields in the lighter soils and compared yields and costs, I've learned to reverse that thought. What happens is economically you don't get the return on fertilizer investment on lighter soils. It's the well-drained, really good soils that will yield for you -- those are the ones you want to feed."

A combination of 15 years of no-till and 10 years of cover crops has also played a big role in managing N. "Organic matter has increased 1/2% over the past five to six years and my soil is like a sponge now," Starkey said. "The soil is absorbing the rainwater, even the heavy rains, and phosphorus and nitrogen are staying in place. As we continue to build our soil, I think we can continue to use less nitrogen." 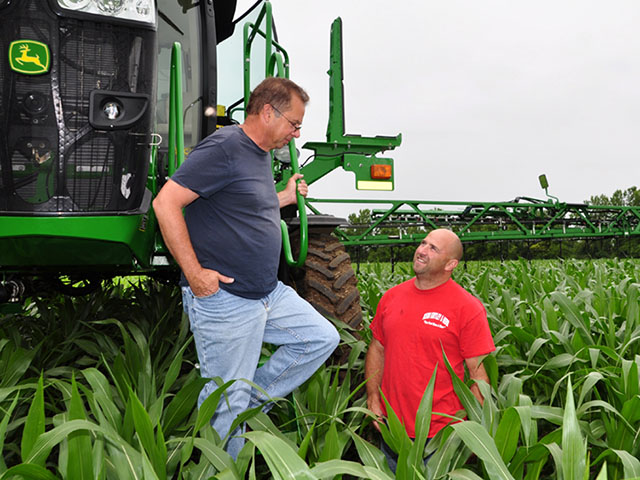