ROCKVILLE, Md. (DTN) -- USDA quietly opened the door on a brave new era of genetic engineering in agriculture this spring.

Buried deep in a dry form letter to DuPont Pioneer dated April 18, the Animal and Plant Health Inspection Service (APHIS) informed the company that it would not be regulating a Pioneer corn hybrid produced by a popular new gene-editing technique called CRISPR-Cas9.

With that bureaucratic flourish, the agency made a strong statement on a simmering controversy on how genetically modified organisms (GMOs) should be regulated in the U.S. They also unleashed a powerful new technology into the agricultural marketplace.

Pioneer's CRISPR-Cas waxy corn hybrid is still five years from the field, according to company estimates. Other traits will likely join it: Monsanto, Bayer and others are busy using gene editing to produce a new generation of crops that could become commonplace -- as long as the precedent USDA set with CRISPR-Cas waxy corn remains in place.

A SIMPLE SNIP WITH A LARGE EFFECT

The CRISPR-Cas9 gene editing technique has been likened to the cut-and-paste function of a Word document.

The letters CRISPR stand for "clustered regularly interspaced short palindromic repeats," that is, snippets of DNA. They are found in many varieties of bacteria, where researchers first noticed them. They work as part of the bacteria's defense system, in partnership with a group of special, DNA-cutting Cas ("Crispr-associated") proteins and RNA molecules.

When viruses invade, the bacterial CRISPR-Cas copies DNA sequences from the virus and saves this information as a short CRISPR repeat -- a sort of molecular mug shot. When that virus invades again, these repeats are remobilized as RNA molecules, which recognize the virus DNA sequence and guide the CRISPR complex to it. There, the Cas protein snips the offending DNA sequence out, disabling the virus.

Using a specific protein, Cas9, researchers are now using this CRISPR complex to target specific genes in the genome of plants, animals and even humans. The RNA guides the CRISPR complex to the gene sequence in question, and Cas9 cuts it out. Researchers can leave the DNA to heal on its own or they can insert a desired gene in its place.

Pioneer's new CRISPR-Cas waxy corn hybrid is missing a gene known as Wx1. Without the gene, corn plants produce a large amount of amylopectin, a certain kind of starch, which gives the corn kernels a waxy appearance.

This specialty grain is milled into starch, which is used in a variety of processed foods, adhesives and high-gloss paper, according to DuPont Pioneer communications specialist Kerrey Kerr-Enskat.

Waxy corn hybrids are well established in the marketplace. Each year, U.S. farmers grow roughly half a million acres of waxy corn, usually under contract and separate from the commodity corn stream, Kerr-Enskat said.

Previously, breeders have had to find plants that have a naturally occurring mutation that makes Wx1 non-functional. These traits are recessive, which means current waxy corn hybrids have inbred parents that both contain the trait. These waxy corn hybrids tend to yield lower than elite corn hybrids on the market, Kerr-Enskat said.

CRISPR-Cas9 allowed Pioneer scientists to pick high-yielding corn hybrids for their parent lines, and simply snip out Wx1, DuPont Pioneer vice president of research and development Neal Gutterson said. "So instead of breeding with a waxy corn variant over and over to try to develop an elite hybrid, we can go to the elite hybrid and just clip out the waxy gene," he said.

After just a few breeding cycles with those hybrids, Pioneer can "have a waxy elite hybrid on demand," Gutterson explained. "Then that trait is inherited just like any other gene in the genome."

Because Pioneer scientists have studied the waxy corn trait and its genetic location for years, the production of a market-ready CRISPR-Cas waxy corn hybrid took less than five years -- compared to a decade or more under traditional breeding, Gutterson said.

USDA declined to regulate CRISPR-Cas waxy corn because no genetic material from a separate organism was inserted into the plant genome, such as happens with Bt corn hybrids.

Even if scientists opt to insert a gene with CRISPR technology, the result still may not trigger regulatory oversight as long as the genes aren't foreign, Gutterson said.

"With CRISPR-Cas9, we're still working just within the genome of the crop, using only the genes naturally available in that crop -- only corn genes in corn, only rice genes in rice," he said. Traditional breeding has been used for millennia to produce the same effect, but with the added challenge of getting rid of all the extra genes that come along with the targeted trait, Gutterson pointed out.

Under this logic, CRISPR-Cas9 is just an accelerated breeding technique -- and a far more precise one, he said.

Not everyone agrees that regulators should take this stance. As simple and efficient as they may be, none of the new gene-editing techniques are known to be perfectly precise and reliable, explained Jason Delborne, a North Carolina State University associate professor of science, policy, and society. "There's an argument out there that it does introduce different kinds of risks than traditional breeding -- either from the mechanism of insertion or editing, which isn't 100% precise, or the additional risk of allowing the transfer of genetic material that wouldn't necessarily happen naturally," he said.

In assessing Pioneer's waxy corn hybrid, USDA is using a regulatory framework for GMOs that was established in 1986, when gene editing techniques like CRISPR-Cas9 were still science fiction, Delborne added. "It seems appropriate for us to revisit that framework," he said.

The National Academy of Sciences has organized a committee to do just that. A team of scientists are reviewing new biotech techniques, such as gene-editing, and will produce a document that gives advice and guidance on how regulators should handle them. See the committee's website here: http://nas-sites.org/….

In the meantime, seed and chemical companies are busy integrating these techniques into their product pipelines.

Gutterson said CRISPR-Cas9 will be used by Pioneer in additional areas like disease resistance, which requires quick responses and solutions, as well as more complex traits like drought tolerance. More specialized products like waxy corn are also likely, such as crops with altered oilseed contents, he added.

Other companies responded in kind. "We are using it and assessing its benefits," said Diego Angelo, global soybean seeds and traits marketing lead for Bayer.

Monsanto has been working with such techniques for years, added John Combest, a communications manager with the company. "We are confident that Monsanto is uniquely positioned to leverage gene-editing techniques given our world-leading germplasm and genome libraries," he said. 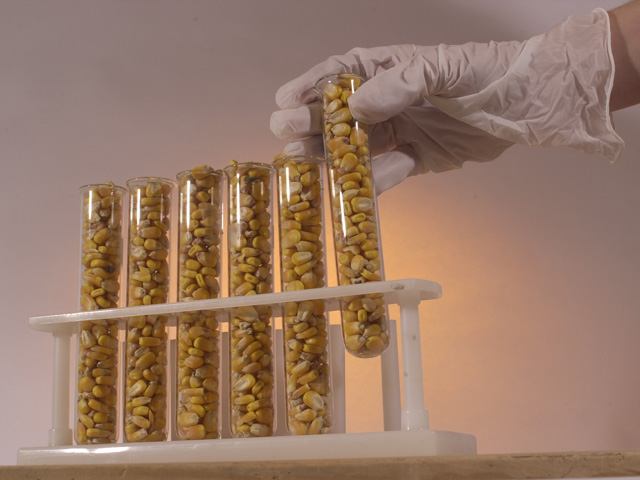