ROCKVILLE, Md. (DTN) -- If your field is beginning to look more like a pineapple crop than a cornfield, you're witnessing some clever corn biology at work.

"We're in period of time where the days have been 95 degrees or higher for a while," Burrus Seed sales agronomist Matt Montgomery said of his service area in Illinois and Missouri. "The corn crop is stressing just a little bit."

Montgomery likens corn plants to a water hose. Water is constantly flowing through the plant. It enters from the roots, flows through the vascular system and ultimately exits through small holes in the corn leaf, known as stomates.

When the roots aren't bringing in enough water, or too much is lost to the searing midday sun, that flow weakens.

"When you trim the flow of water, a hose gets floppy," Montgomery explained. "In the same way, a corn plant wilts when the water pressure within it drops."

But unlike your average garden hose, a corn plant can do something about its low water flow -- a souvenir from its early evolutionary days as a tropical Mexican plant, Montgomery said.

Within the leaf tissue, large cells inflate with water like tiny bladders. When they are full, the leaf is flat and healthy looking. But when water is drawn out of the plant leaf, the little bladders deflate and contract, causing the leaf to roll inward.

The result is two-fold. Immediately, less surface area of the plant is exposed to solar radiation, which reduces how hot the plant gets. At the same time, the corn plant has constructed a more pleasant environment for its leaves.

"As the leaves curl, a region of high humidity develops," Montgomery explained. "The plant has produced an artificial zone inside the leaf tube of higher humidity where water is not leaving the plant as quickly."

So clearly moisture stress drives this reaction, but why do some corn leaves roll when just across the road the neighbor's corn looks perky and happy?

The answer is often in the roots, Montgomery said.

Last year during the rain-soaked month of June in Missouri, some growers watched in wonder as their corn leaves rolled up tightly as soon as drier weather appeared, he recalled.

"During the wet period, the roots did not migrate deep down in the soil profile and were having trouble finding moisture when we finally hit a dry spell," he said. "So anything that restricts root growth can cause the same symptoms."

Severe and prolonged heat will also cause this reaction, as will dry, low-humidity days where the plant rolls its leaves to restrict evaporation.

Field differences -- such as compacted soil -- and hybrid differences can also contribute to leaf rolling, Montgomery added. "In some plants, the bladders in the leaf will shrink a little earlier than another hybrid."

While leaf rolling is a good mechanism for slowing water loss, it isn't ideal or sustainable for the corn plant.

"Seeing corn leaves rolling isn't something to automatically worry about," Montgomery said. "The issue is how long it's exposed to that moisture stress." After multiple days of rolling up so tightly that the leaves resemble pineapple plants or sticks, yield loss can begin, he said.

Corn plants aren't alone in their efforts to conserve water.

When soybean plants start to feel moisture stress, tiny cells at the base of their leaves step up to protect the plant. Montgomery compares them to a person's wrists. "Like a wrist with a hand, they will twist the leaf around to show its silvery underside to reflect more solar radiation."

The result are fields that take on a grey or silvery cast, he said.

There are no products beyond rainfall (or irrigation) to fix these moisture-stressed plants -- and don't believe anyone who tries to tell you otherwise, Montgomery added.

"That's a bill of goods -- there's no magic sauce to put on the crop to fix drought," he said. "You need moisture for drought stress -- that's what fixes it." 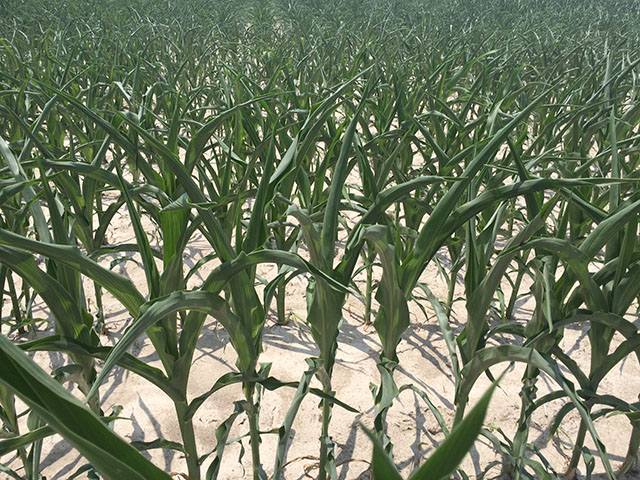