Decatur, Illinois (DTN) -- Monsanto may have rejected the $62 billion deal offered by Bayer AG on Tuesday, but the St. Louis based seed and biotech company also admitted it wouldn't rule out further discussion.

Bayer has since replied that it found Monsanto's response encouraging. However, the pressure is now on the German pharmaceutical and chemical company to increase an offer that already has some Bayer investors fearing the transaction would strain the balance sheet and put too much emphasis on agriculture at the expense of health care. Monsanto said in a prepared statement that the company is "open to continued and constructive conversations to assess whether a transaction in the best interest of Monsanto shareowners can be achieved."

"We believe in the substantial benefits an integrated strategy could provide to growers and broader society, and we have long respected Bayer's business," said Hugh Grant, Monsanto Chairman and CEO. "However, the current proposal significantly undervalues our company and also does not adequately address or provide reassurance for some of the potential financing and regulatory execution risks related to the acquisition."

Bayer reiterated that its $122 per share all-cash proposal provides full and certain value for Monsanto shareholders. The bid valued Monsanto at 37% over its closing share price of $89.03 on May 9, the day before Bayer made a written proposal to the company. Monsanto's stock closed Tuesday at $111.42 a share.

"We are pleased that Monsanto's board shares our belief in the substantial benefits an integrated strategy could provide to growers and broader society," said Werner Baumann, CEO of Bayer AG, in a prepared statement following the news Monsanto had declined. "We are confident that we can address any potential financing or regulatory matters related to the transaction. Bayer remains committed to working together to complete this mutually compelling transaction."

Monsanto made several failed attempts to bring Syngenta into a relationship last year. A $2 billion breakup fee eventually become part of those negotiations and that may be one of the prenuptial assurances Monsanto is looking for in further offers.

The run at Syngenta was the first of several indications that the world's largest seed and chemical players were consolidating again. Since then, Dow Chemical and DuPont have agreed to a merger that would form a combined company valued at roughly $103 billion. Chinese state-owned China National Chemical Corp. and Syngenta agreed to a cash purchase price of $43 billion earlier this year. All of these transactions are still pending approval, and antitrust concerns are part of the discussions.

Bayer went on the offense in a media conference on Monday discussing how they see the marriage working and touting the benefits of the union with Monsanto. Under the proposed transaction, the plan was to leave the global Seeds & Traits and North American commercial headquarters in St. Louis, for example.

Liam Condon, head of Bayer's crop science division, acknowledged during the media call that the potential tie-up could possibly require some divestitures but said it was too early to speculate on what those might be. The two companies overlap mostly in cotton and vegetables on the seed side. How Bayer's LibertyLink trait technology and glufosinate herbicide business would fit with Monsanto's Roundup Ready trait system and new dicamba herbicide traits is another question.

Both Monsanto and Bayer communication officials told DTN the companies would have no further comments beyond the press releases at this time.

For more information how Bayer sees the proposal shaping up, go to: www.advancingtogether.com 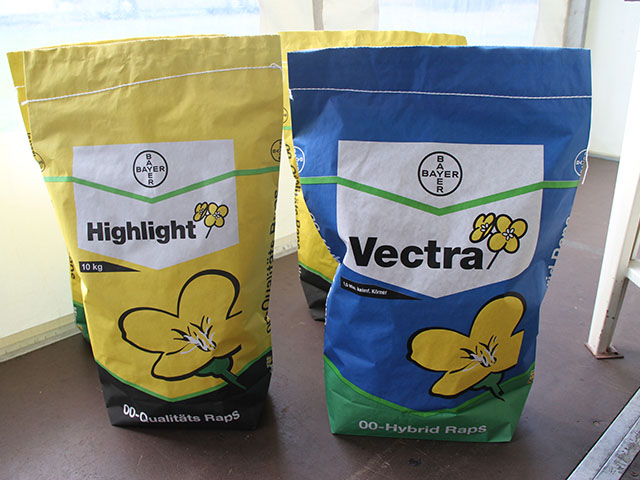