DECATUR, Ill. (DTN) -- Imitation has been the sincerest form of frustration for plant pathologist Tom Allen and other researchers investigating a new disease that's being called soybean taproot decline. The Mississippi State University scientist had observed some odd conditions in soybean fields in his state for several years. However, the symptoms were similar to other soybean diseases and proper protocol requires proving what organism causes the disease before officially declaring it a problem.

Allen says researchers have now established the uniqueness of this fungus-based disease and bestowed the name soybean taproot decline. "We are 95% certain we know what is causing the disease, but still need the last 5% before we are going to say too much about this issue," Allen told DTN. "As of right now, this is a new issue for soybean and only occurring (at least we think) in the southern U.S. in Arkansas, Louisiana and Mississippi."

Allen said the disease mimics sudden death syndrome (SDS) in the yellowing of leaves while the veins stay green. However, there's one telling difference between the diseases: "Plants are typically stone-cold dead, which is a smidge different than SDS in the southern U.S.," Allen said. "Normally, SDS takes longer to develop and rarely do you see any 'dead' plants," at least in most of the fields he observed over the years, he said. SDS infects plants early in the plant's life, but visual symptoms typically show up late in the season when patches of plants throughout the field begin to drop leaves and pods don't fill properly.

By comparison, Allen and Experiment Station researcher Maria Tomaso-Peterson have found that soybean taproot decline can be spotted during the vegetative stage of soybean growth, when the plants emerge and begin developing leaves.

"If you grab a soybean plant and pull it out of the ground, and you leave the vast majority of the taproot there, or you have a portion of the taproot and you break it, and it snaps and sounds dry, you have taproot decline," Allen said. "The organism that causes this essentially produces a dry rot and rots the taproot away. The base of the stem will look black, indicating fungal growth."

Preliminary data suggested the average amount of yield loss caused by the fungus is about 18% of harvestable yield. However, trials were conducted in small plots and Allen said farmers may not see such heavy losses in large-scale production.

Further work is being conducted in all three Southern states to further confirm the organism that is causing taproot decline. Next steps are to initiate full-scale field trials to determine management tactics. Allen said researchers have not observed any differences associated with planting date or crop rotation. 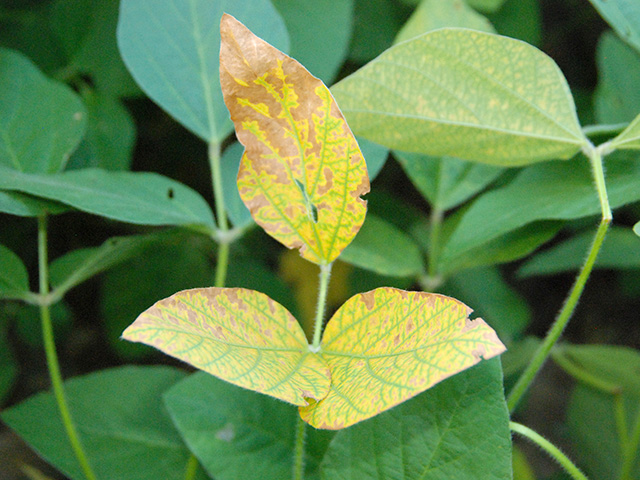