On Jan. 21, the Twin Ports were officially closed for the 2022-23 shipping season as the 1953-built laker Saginaw returned to take another load of iron ore from Duluth-Superior to the Algoma Steel facility in Sault Ste. Marie, Ontario. The facility is located just above the Soo Locks, which closed Jan.16.

"We expect that will be the last cargo move of the season from the Port of Duluth-Superior. After that, we can begin finalizing tonnage totals for the season," Jayson Hron, director of Communication and Marketing, Duluth Seaway Port Authority, told DTN on Jan. 20. "Should the Saginaw depart Superior, Wisconsin, at 07:46 or later Saturday morning, it would be the latest ship departure from the Port of Duluth-Superior since the mid-1970s."

The Saginaw did not disappoint the record keepers, leaving Superior Saturday, Jan. 21 at 4:21 p.m. After it delivers its load, it is anticipated that the vessel will either winter in Ontario at Sault Ste. Marie or Thunder Bay.

As for winter layups in the Twin Ports, BoatNerd shipping news reported that "a smaller-than-usual lay-up fleet in the Twin Ports includes American Mariner, Edward L. Ryerson, and Lee A. Tregurtha resting at Fraser, with American Spirit hanging out nearby at Elevator M."

Remember that the grain shipping season from the Twin Ports ended with the saltie Federal Kushiro sailing from Duluth's Ceres-Riverland Ag grain terminal on Dec. 22, with approximately 23,000 short tons of wheat bound for Italy. Oceangoing vessels needed to be clear of the Montreal-Lake Ontario section of the Great Lakes-St. Lawrence Seaway System by noon Eastern Time on Dec. 31, 2022, the Seaway's seasonal closure date. However, because of the severe weather and ice during that time, St. Lawrence Seaway released a statement on the afternoon of Dec. 27, 2022, saying, "As a result of severe environmental conditions impacting navigation, the closing date for the Montreal-Lake Ontario Section has been extended from 12:00 (noon) Dec. 31, 2022, to 12:00 (noon) Jan. 1, 2023."

The Soo Locks in Sault Ste. Marie, Michigan, usually close to marine traffic at midnight on Jan. 15, but were a day late this year. Federal regulation establishes the operating season based on the feasibility of vessels operating during typical Great Lakes ice conditions. However, this year they waited for the vessel Defiance and barge Ashtabula, a 720-foot integrated tug and barge heading to Burns Harbor, Indiana, with a load of iron ore, as ice slowed its progress on its way to the Soo Locks.

Every year, the U.S. Corps of Engineers (USACE) uses the winter period to perform maintenance to keep the Soo Locks operating. The Detroit District team works long hours in extreme conditions to complete a significant amount of maintenance during this annual closure period. "The work they perform is unique, especially given the harsh northern Michigan conditions they work in," noted the USACE.

The Corps of Engineers has several projects to complete before reopening the Poe Lock in March. The MacArthur Lock is scheduled to open April 24.

"This winter, a portion of maintenance projects on Gate 1 require the Poe Lock to remain full while others require the lock to be dewatered," Maintenance Branch Chief Nick Pettit said. "Sequencing Poe Lock maintenance/repairs allows our team to maximize the non-navigation season."

Dewatering of the Poe Lock will begin Feb. 13. The MacArthur Lock will not be dewatered this year.

The Corps noted that the team will install a temporary panel bridge across the Poe Lock, which will provide the ability to mobilize materials and equipment to the job sites throughout the winter closure.

The Corps of Engineers is building a second Poe-sized lock to provide much needed resiliency in the Great Lakes Navigation System. "The second Poe-size lock, 110-feet by 1,200-feet, is being built on the existing Davis and Sabin Locks sites. The Davis Lock, which opened in 1914, has not been used since 2018, and only to transport Corps vessels. The Sabin Lock opened in 1918 and has been inactive since 1989. Both the Sabin and Davis Locks are too shallow for most modern vessels."

The New Lock at the Soo Project in Sault Ste. Marie, Michigan, was reauthorized in the Water Resources Development Act (WRDA) 2022 on Dec 23, 2022. The project reauthorization amount is $3.219 billion, said the Corps.

More than 4,500 vessels, carrying up to 80 million tons of cargo, maneuver through the locks annually. Iron ore, coal, wheat and limestone are among the most frequently carried commodities. Opened in 1969, the Poe Lock is 1,200 feet long. The MacArthur Lock was opened in 1943 and is 800 feet long.

Video of Saginaw leaving Superior on Jan. 21, 2023, for the last time until spring: https://www.youtube.com/…

A November 2021 video of the tug-and-barge combination of the Ashtabula and Defiance, to give you an idea what it looks like: https://youtu.be/… 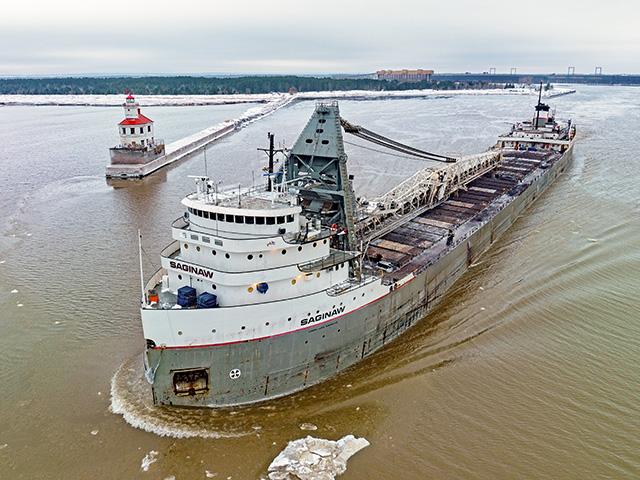