Editor's Note: 2021 was a wild one, from a tumultuous change in the White House, to continued La Nina influences on the weather, to skyrocketing fertilizer and input costs. There were also a lot of good stories to tell. As the calendar year comes to a close, we asked the DTN/Progressive Farmer writing team to pick their favorite effort from the year. The stories range from fun insights into ag entrepreneurs to serious investigations into the unintended consequences of popular production methods, to life lessons learned along the way to telling the tale. Each story also includes a link to the original story, in case you missed that. Enjoy a look back, with our sixth story shared by Mary Kennedy.

Minneapolis, Minn. (DTN) -- My favorite story of 2021 was titled, "Time to Give Spring Wheat Last Rites?" It was one of many I did on the devastating drought in parts of the Pacific Northwest, northwest Minnesota, Montana, and the Dakotas that challenged farmers in those states during the spring wheat planting, growing and harvest season.

But what made it my favorite was that even though many of them saw their spring wheat fields barely hanging on, they still held out hope that rains would come.

Some of the farmers I spoke to were former customers of mine when I worked at a grain elevator in western North Dakota. The elevator managers I interviewed were customers when I was spring wheat and durum buyer in Minneapolis for 15 years and my territory was North and South Dakota and Montana, and are still friends. The others are friends I have made on social media, and they are always willing to share their story every year -- good or bad.

This year was one of those bad ones for many. In March, I talked to farmers in the drought-stricken states to ask how planting would go since it was so dry. In eastern Montana and North Dakota, there was talk of fewer spring wheat acres, and many said there wasn't enough moisture to get the wheat to germinate, and subsoil moisture was depleted last year, so farmers there said it would take rain to make the grain. Then, of course, there is that old saying, "Plant in dust, grain bins will bust."

By June 1, I checked back with everyone and wrote a story "Is New-Crop Spring Wheat on Life Support?" and found out it indeed was, especially in eastern Montana and western North Dakota.

One of my former customers, who by June farmed in one of the highest drought ratings in North Dakota, told me that he was still hoping for timely rains, the battle cry in the states hit by drought. Emergence was uneven, and overall, plant growth was poor, and yet he still had hope.

My heart ached for him and his neighbors because they had planted their crop with the hopes that rain would come but never did. It has amazed me in my entire 30-plus years in the grain business how farmers never give up hope. It is a tribute to every farmer in our country that no matter how bad things get, they keep moving forward and look ahead to the following season, hoping for better results. That's why I have never left this business, because of the strength and determination farmers have, and I am honored to know so many of them.

In the end, harvest for some farmers in the drought states proved to have better quality than expected and some had better yields as well. As for my guys in eastern Montana and western North Dakota, they didn't have much to harvest, and many acres in those parts were either abandoned or hayed for feed or zeroed out by insurance.

My farmer in eastern Montana -- who not only had drought but had fires and grasshopper infestation as well -- told me in October after his poor harvest that, "The last rain is long gone, and hoppers are way too active. We have a fire warning again for the next three days near 90s and some wind. Time for picking rocks, taking down fences and painting and repairing equipment for next year."

Getting ready for next year even after a miserable growing season and actually his third in a row, is a testament to his dedication to farming and he has been at it for over 50 years.

"Tomorrow is another day" is a mantra our farmers live by and maybe so should we all.

The original story, "Time to Give Spring Wheat Last Rites?" can be seen at https://www.dtnpf.com/…

The other story mentioned, "Is New-Crop Spring Wheat on Life Support?" can be seen at https://www.dtnpf.com/… 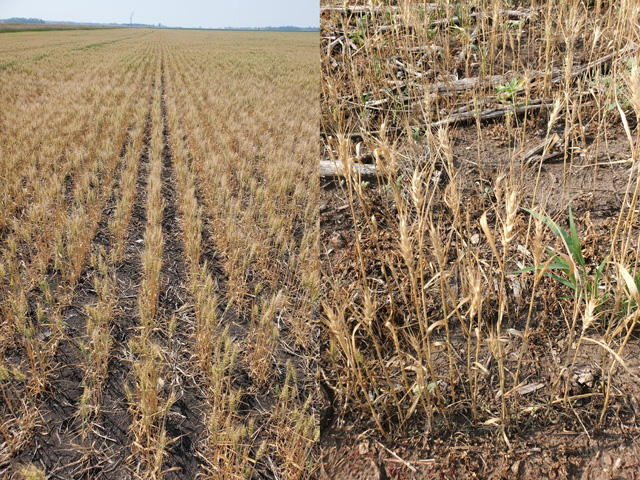