In Arizona, 84% of the state is experiencing severe drought conditions and is preparing for its first-ever Tier 1 water shortage cuts. The state has functioned under Tier 0 for the last few years, making only slight decreases to the water supply, according to AZ Big Media in an Aug. 14 news story. "When Tier 1 cuts are put in place, Arizona will lose nearly 18% or 512,000 acre-feet of water it has been drawing from the Colorado River basin. That burden falls mostly on farmers and ranchers as most of the water sourced from the river goes to the state's agriculture industry."

Paul Ollerton, who goes by the nickname Paco, told DTN these cuts may be coming sooner than later. Paco grows cotton and corn (silage) for feed for dairy farmers near Casa Grande and did not grow desert durum last year, saying that durum acres there have been down. He would grow it as rotation for his cotton but said that price has kept him from planting it. "If the mills want to put a good pre-plant price (95% to 98% is forward contracted before it goes in the ground) on this winter's durum crop, I may consider growing it," said Ollerton. "But the water shortage and possible cuts to us farmers may change that."

Arizona gets an estimated 36% of its water from the Colorado, and a large portion of it flows through the CAP Canal to cities, farms and tribal lands. According to Wikipedia, the Central Arizona Project (CAP) is a 336-mile diversion canal in Arizona in the southern United States. The aqueduct diverts water from the Colorado River to the Bill Williams Wildlife Refuge south portion of Lake Havasu near Parker into central and southern Arizona. CAP is managed and operated by the Central Arizona Water Conservation District (CAWCD).

Late in the day on Aug. 16, Ollerton sent DTN an article from azcentral.com reporting that the federal government had just declared a first-ever water shortage on the Colorado River, announcing mandatory cutbacks next year that will bring major challenges for Arizona farmers and reduce the water allotments of Nevada and Mexico. Ollerton said, "This news doesn't give me any info yet as to what the allocation will be for next year."

The declaration of a shortage by the U.S. Bureau of Reclamation has been anticipated for months and was triggered by the spiraling decline of Lake Mead, which stores water used by Arizona, Nevada, California and Mexico. The cuts will be the largest to date on the river, shrinking the flow of water through the 336-mile Central Arizona Project Canal, which for more than three decades, has supplied Arizona's growing desert cites and vast stretches of farmlands, noted azcentral. The shortage next year will reduce the Central Arizona Project's water supply by nearly a third, shrinking the amount flowing through the CAP Canal to farmlands in Pinal County that produce cotton, hay and other crops.

Desert crops in Arizona are irrigated and most farmers use drip irrigation, said Ollerton. He said that using that irrigation system over furrow irrigation allows any rainfall to actually "percolate" into the fields and not run off, giving moisture to their soil instead. Drip irrigation is the frequent, slow application of water to the soil or growing area into the plant root zone, drop by drop, preventing erosion and runoff that wastes water resources. If Arizona farmers do indeed see a cutback in water allotment, that drip could slow and create uncertainty for farmers' next winter crops.

California water regulators unanimously voted on Aug. 3, to restrict water access for thousands of Central Valley farmers as the state endures a severe drought. Although California water authorities have occasionally controlled water use during previous droughts, they have never implemented limitations that affect such senior water-right holders, according to the Aug. 11 Daily Dairy Report.

Under the new limitations, 5,700 water right holders, including farmers and landowners, would no longer be able to divert water from the Sacramento and San Joaquin River watersheds for agricultural use. Those who want to divert 55 gallons or more per day from water sources in this region must send in a petition to the Deputy Director of the Board to get approval. All water use also has to be reported by those who have water rights in the region, reported the California Globe on Aug. 14. "While the new diversion ban still needs approval by the Office of Administrative Law, it is widely expected to be accepted by them, with the new regulations likely to begin by Aug. 16."

The Globe noted that in addition to the steadfast opposition from farmers, many lawmakers decried the latest diversions with both Republicans and Democrats largely siding with the farmers. Many were worried about the conditions the farmers now faced, as well as food supply issues.

More than 600 miles south of the San Joaquin Valley, in the southeast corner of California, lies the Imperial Valley where Roy Motter, of Brawley, California, farms. Motter is a member of the California Wheat Commission and is past chairman of U.S. Wheat Associates.

He said he did not grow desert durum this past season because the price didn't justify planting it. "We can grow multiple classes of wheat, but for the most part it will be durum, as this class has the highest yields and the greatest potential for a higher price," said Motter. "The acreage of wheat has been quite low (20% of our historical average) for a number of years due to the low price, our high cost of production and the availability of other more profitable crops."

Brawley is located in the Colorado Desert and Lower Colorado River Valley regions. The city's elevation, like other Imperial Valley towns, is below sea level, hence the "gravity" irrigation farmers there rely on.

The Imperial Valley depends solely on the Colorado River for its surface water supply. Imperial Irrigation District (IID) imports raw water from the Colorado River and distributes it primarily for agricultural use. According to the University of California Ag and Natural Resources, the 80-mile-long All-American Canal delivers water to the southeast corner of the Imperial Valley.

Roughly 2.8 million-3.0 million acre-feet of water is used per year to grow the crops and livestock to help feed the nation. Irrigation water is delivered via 16,000 miles of canals managed by the local water company, the IID. Most of the water is delivered by gravity flow as the valley is tilted slightly to the north. "Since our annual rainfall here is just under 3 inches, farmers rely on this water to grow our crops," said Motter.

"The drought is not directly affecting us this year," said Motter. "For the short term, we do not have water issues as to the amount that we have to farm with. For the long term, we fear that we will potentially have big issues if the drought continues and if the urban population flexes its political power and takes some of our water."

Here are links to more information about Lake Mead and Lake Powell, the main reservoirs on the Colorado River: 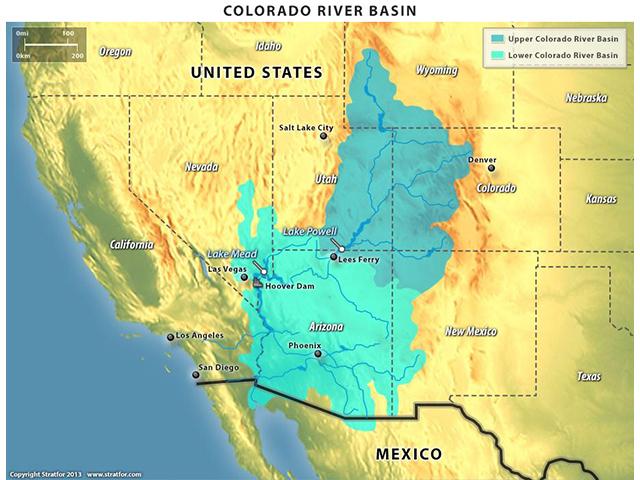