The U.S. Coast Guard, in a news release on May 12, said it had issued a waterway restriction to all vessel traffic on the Lower Mississippi River Tuesday near the I-40 bridge in Memphis, Tennessee. The restriction was put into place due to a crack discovered by the Arkansas Department of Transportation on the I-40 bridge near the center span. The waterway restriction closes the river to all vessel traffic between mile 736 and mile 737 on the LMR.

Midday Wednesday, there were 16 vessels with a total of 229 barges in the queue, but that number could grow as the closure remains. Ag commodities that need to reach the Gulf for export and empty barges coming back upriver must pass under that bridge.

"The Coast Guard is currently working with Arkansas Department of Transportation, Tennessee Department of Transportation and river industry stakeholders on this developing situation," said Ryan Rhodes, captain of the Port of Memphis. "Based on the current information available, we have closed a portion of the Lower Mississippi River out of an abundance of caution. The captain of the port is monitoring the situation and will continue to ensure the safety of the maritime environment and surrounding community."

Arkansas Sen. Keith Ingram said on his social media account, "According to Arkansas Department of Transportation (ARDOT), engineers are trying to determine the strength of the bridge and working with Tennessee Department of Transportation (TDOT) to make a plan for repairs. The strength of the bridge will determine whether repairs can take place with traffic flow. Based on my conversations with ARDOT, the crack on the I-40 Hernando de Soto bridge is on a support beam and will likely take a considerable amount of time to inspect and fix. As per an agreement, Tennessee officials will take the lead on repairs."

In an email to DTN, Mike Steenhoek, executive director of the Soy Transportation Coalition, had this to say about the river closure: "It remains to be seen when barge traffic will be allowed to resume, but any suspension of traffic -- even temporarily -- on the Mississippi River is most unwelcome to U.S. agriculture.

"According to the U.S. Department of Agriculture, in the week ending May 1, 438 barges moved down river destined for Gulf export facilities. Most of these barges were loaded in areas north of Memphis. It is reasonable to assume hundreds of barges of U.S. grain will be negatively impacted by the closure depending on its duration."

INFRASTRUCTURE CAN'T REMAIN ON THE BACK BURNER

Steenhoek said it is important to regard this bridge closure and the resulting suspension of traffic in the broader context of a national and global supply chain that is currently under tremendous stress.

"The seismic shift in consumer spending over the past 12-15 months from services (restaurants, travel, entertainment, etc.) to goods has imposed historic demand on manufacturing and production and the supply chain that accommodates them," he said. "Every link (ports, railroads, trucking, maritime shipping, etc.) in the supply chain is under stress. When a link in the supply chain -- barge, in this case -- experiences a shutdown or delay within the context of overly subscribed transportation network, challenges can easily compound -- adding insult to injury."

Steenhoek said he hopes this specific occurrence will motivate the nation's leaders to agree to a strategy for improving infrastructure. "A bipartisan win is available to the president and Congress," he said. "I hope they decide to embrace it."

In the case of the I-40 bridge, it was a blessing that an inspector was able to spot the crack -- two years after the last inspection. So, who knows how long it had been there? I have seen firsthand what can happen when a bridge has a structural failure. I was leaving work on Aug. 1, 2007, heading to my parking spot near the Mississippi River in downtown Minneapolis when the city lit up with sirens. When I reached my car, which was parked near a fire station, I found out from one of the firemen that the I-35 bridge spanning the Mississippi River had collapsed. When I saw the destruction the next day with my own eyes, I couldn't believe there weren't more fatalities. Thirteen people lost their lives that day in the collapse along with 145 injured, many of them seriously.

Yes, the I-40 closure will be inconvenient for drivers, especially, but had that crack not been located, the alternative could have been catastrophic. 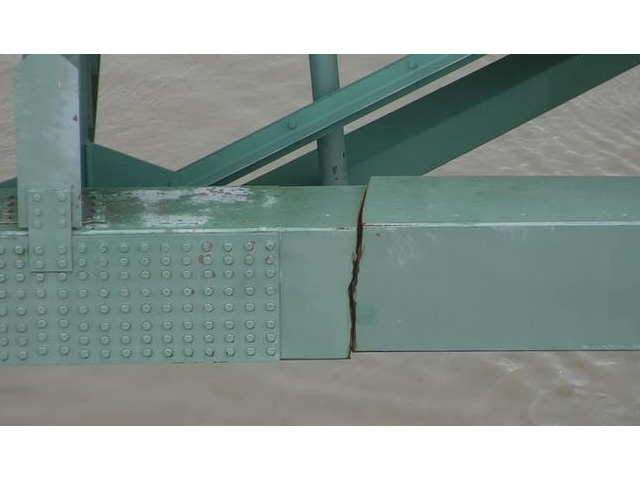