On March 23, 2021, the Surface Transportation Board (STB/Board) said in a press release that they received a "notice of intent" on March 22 regarding a proposed transaction that would place Canadian Pacific Railway Company (CP/CPR) and the Kansas City Southern Railway Company (KCS/KCSR), both of which are Class I railroads, under common control. "Under the Board's statutes and regulations, this proposed transaction would be classified as "major" and would be the first major transaction to seek Board approval in more than two decades," said STB Chairman Martin J. Oberman in the statement.

The STB adopted final regulations governing proposals for major rail consolidations on July 11, 2001. These new rules substantially increased the burden on applicants to demonstrate that a proposed transaction would be in the public interest, by requiring them (among other things) to demonstrate that the transaction would "enhance competition" where necessary to offset negative effects of the merger, such as competitive harm or service disruptions.

Below is the waiver in that final regulation that is now in question by four of the five Class 1 railroads and some of the larger shipper organizations.

1180.0(b): Waiver: We will waive application of the regulations contained in this subpart for a consolidation involving The Kansas City Southern Railway Company and another Class I railroad and will apply the prior regulations instead, unless we are shown why such a waiver should not be allowed. Interested parties must file any objections to this waiver within 10 days after the applicants' prefiling notification (see 49 CFR 1180.4(b)(1)). As discussed above, we are also adding a new subsection (b) to waive these new regulations for consolidations between KCS and another Class I railroad and allow for our prior regulations to apply, unless parties persuade us otherwise.

The four Class 1 railroads opposing the waiver are Canadian National, Burlington Northern Santa Fe, Norfolk Southern and Union Pacific. In their protest/opposition statement to the STB, the UP said, "The special KCSR waiver was never appropriate, and even if it had been appropriate when it was devised roughly 20 years ago, it is certainly not appropriate for today's KCSR and the proposed $29 billion transaction with CP. This use of the special KCSR waiver would allow Applicants (CP and KCS) to avoid complying with the Board's current rules regarding voting trusts, which require applicants to show why their use of a proposed trust would be consistent with the public interest. The Board should abandon the special treatment it afforded KCSR at the turn of the century and evaluate the proposed transaction in the present, vastly different KCSR context."

Mike Steenhoek, Executive Director Soy Transportation Coalition, told DTN via email that, "as we know, mergers and acquisitions are inspired by and result in the benefit of the shareholders, customers or both. I have reached out to a number of prominent agricultural rail shippers to solicit their initial perspective on the proposed merger. At this moment, it is too early to make a definitive conclusion on whether the merger, if approved, will primarily benefit shareholders, customers or both, but the following are a handful of thoughts of mine and those agricultural shippers from whom I have received feedback."

-- Whenever a merger or acquisition among large providers of a particular service occurs -- including within the railroad industry -- it is healthy to have some degree of concern given how mergers and acquisitions in the past have indeed resulted in a reduction of rail service access or increased rates among agricultural shippers.

-- In addition, a particular merger or acquisition often inspires and motivates additional mergers and acquisitions. Will this merger, if approved, result in increased energy for further consolidation among Class I railroads? I do not know of many agricultural shippers who would welcome such a prospect. It obviously remains to be seen whether this will occur.

-- Among current Canadian Pacific customers, the proposed merger could very well result in greater access to new markets in the southern U.S. and Mexico. Many of these current Canadian Pacific customers currently only have access to export terminals in the Pacific Northwest. Similarly, current Kansas City Southern customers may enjoy new access to markets served by the Canadian Pacific network. Canadian National Railway's current network provides seamless access from New Orleans to Chicago, which then splits in a Y shape -- ultimately providing service to both the east and west coasts of Canada. The proposed Canadian Pacific/Kansas City Southern merger will provide access to a similar geographical reach with the additional access into Mexico.

-- Whenever a merger or acquisition is proposed, red flags are particularly raised among customers when the two companies have a similar geographical footprint. This does not guarantee that significant portions of service will be disbanded or eliminated, but it often portends that. As one can see from reviewing the current Canadian Pacific and Kansas City Southern network maps, the two railroads currently have little service overlap. This provides some degree of encouragement among customers -- including agricultural shippers -- that this particular proposed merger may result in increased service options.

Steenhoek concluded, "It is important to view this proposed merger in the context of the other competing Class I railroads. If approved, the new Canadian Pacific/Kansas City Southern railroad will still rank as the smallest Class I railroad in terms of operating revenue. Mergers and acquisitions usually elicit more concern when the two companies currently possess a higher percentage of the overall market share."

The March 23 STB press release noted that the agency has exclusive authority to review these proposed transactions and to determine whether to issue requisite approvals. "The agency intends to scrutinize the transactions carefully and diligently, in keeping with the applicable statutory and regulatory frameworks. Additionally, the agency is committed to moving forward expeditiously, while ensuring meaningful opportunities for public participation and stakeholder comment," said Oberman.

The STB isn't expected to determine whether the deal can move forward until 2022 due to the process of collecting comments and rebuttals and then scrutinizing all of that before making a decision.

Link to filing by six of the largest shipper organizations: https://www2.dtn.com/…

Here is a link to all filings sent to the STB from those who support and those who oppose the merger: https://prod.stb.gov/… 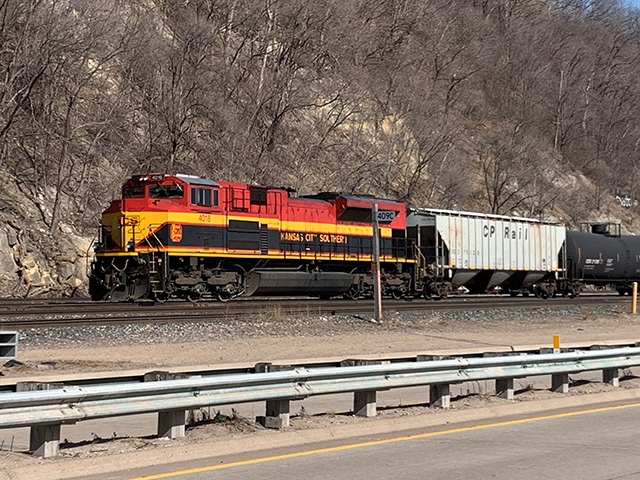