The Motor vessel R. Clayton McWhorter, originating from the Quad Cities in Iowa and Illinois, and pushing 12 barges en route to St. Paul, Minnesota, was locked through Lock and Dam 3, near Welch, Minnesota on March 19, marking the unofficial start of the 2021 navigation season, reported the United States Army Corps of Engineers (USACE) St. Paul District. This year, a second tow, motor vessel Neil N. Diehl, followed right behind and reached St. Paul on the evening of March 19.

Motor vessel R. Clayton McWhorter was welcomed with open arms as the first tow to reach St. Paul to start the 2021 navigation season. The tow made its trek through Lake Pepin on March 19, the last major barrier for vessels reaching the head of the navigation channel in St. Paul, Minnesota.

Located between the Minnesota cities of Red Wing and Wabasha, Lake Pepin is the last part of the river to break up ice, because the river is wider and subsequently the current is slower there than it is at other reaches of the river, noted the USACE website. Once a tow can make it through Lake Pepin, it can make it all the way to St. Paul. The 2020 navigation season started March 18, when the motor vessel Miss Doris locked through Lock and Dam 2, near Hastings, Minnesota, heading to St. Paul.

The start of navigation is an exciting time for the region and a welcomed sign of spring in the far Upper Mississippi River. The other good news is that Lock and Dam 25 near Winfield, Missouri, opened during the weekend after expectations that the winter maintenance and repairs might last until the end of March.

This means that more tows will head up to St. Paul with more barges -- some possibly filled with fertilizer or sand and gravel, and others empty for loading out grain to head to the Gulf.

The St. Paul District maintains a 9-foot navigation channel and operates 12 locks and dams to support navigation from Minneapolis to Guttenberg, Iowa. Keeping this system open is vital to the nation's economy. On average, agricultural producers save around $1 per bushel on corn and soybeans by using the river to ship their commodities rather than other transportation methods, noted USACE. The commercial navigation industry estimates an annual average savings of nearly $400 million by using the inland waterways instead of overland shipping methods. In addition to the economic savings, navigation reduces the stress on roads and bridges.

The USACE, St. Paul District, released its 2020 navigation statistics for the Upper Mississippi River on Feb. 8, and said lockages for the year through the last lock and dam operated by the district were above the 10-year average.

During the 2020 season, USACE supported 2,620 commercial navigation lockages at Lock and Dam 10, near Guttenberg, Iowa, which was above the 10-year average of 2,164 lockages. The 2020 lockages supported 16,974,594 tons of commodities by the navigation industry. During the 2019 season, USACE supported 1,750 commercial lockages and the movement of 11,575,625 tons of commodities, stated the report. The 2020 navigation season unofficially came to a close on Nov. 30 after the motor vessel Colonel departed St. Paul. Navigation statistics fluctuate from year to year, depending on the weather, river flows and the length of the navigation season.

According to the Mississippi National River and Recreation Area, St. Paul, grain accounts for the vast majority of downbound tonnage from there. Approximately 8 million tons of Minnesota's corn, soybeans and wheat is shipped annually by barge to New Orleans for export to destinations around the world.

Liquid asphalt for roads and roofing is shipped downriver from Twin City oil refineries. Canadian potash is transferred from rail to barge and carried to locations where it is distributed for use as fertilizer. Other downbound commodities include petroleum coke for power generation, scrap metal for reprocessing, petroleum oil, sunflower oil, molasses and fly ash. 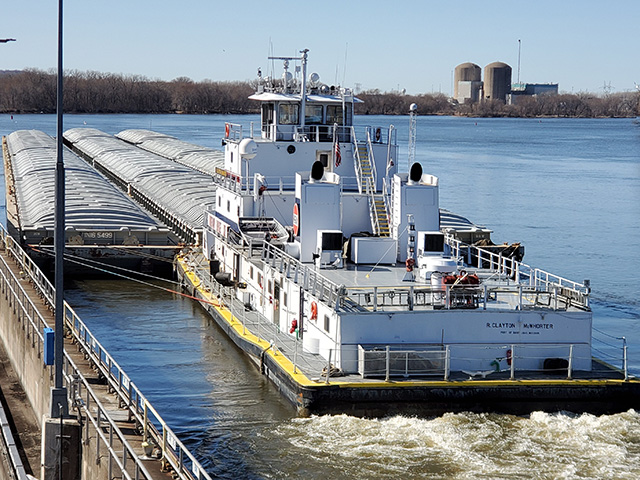