The U.S. Coast Guard (USCG) began breaking up the ice in the Duluth Superior area on March 10. In the next two weeks, they'll make their way up to Thunder Bay and over to the Apostle Islands, where ice breaking up there should only take a few days, according to the Coast Guard.

"We're getting ready for shipping to return to Duluth, the locks of Sault Ste. Marie open on the 25th and we need to have everything ready so when ships come in, they can actually get to where they need to go," said USCG Deck Watch Officer ENS Kyle Hanson.

According to NOAA, this year's peak ice cover was back in the middle of February during the extreme cold snap. But with warmer temperatures coming and going, Duluth's basin is already open water, and Coast Guard members said it wouldn't be too difficult to break up any ice that's still out there.

Jayson Hron, Director of Communication and Marketing, Duluth Seaway Port Authority, told DTN that, "There's minimal ice coverage on Lake Superior this winter and the U.S. Army Corps of Engineers (Detroit District) has confirmed that it will be opening the Soo Locks approximately 12 hours early this season, at noon Eastern Time on March 24. Indications point to a full-throttled start to the 2021 shipping season."

I asked Huron if he knew when the first saltie would come to the Twin Ports to open the 2021 grain shipping season and he said, "We haven't yet received any word regarding early-arriving grain vessels. The first vessel position report hasn't been released yet."

The Alder will be carrying out icebreaking operations at the Port of Thunder Bay, Ontario, on or around March 16, said the Canadian Coast Guard (CCG) in a news release. The purpose of these operations is to break ice in the area so commercial vessels can access the port safely.

Coast Guard icebreaking service on the Great Lakes and connecting waterways is delivered in close co-operation between the Canadian and United States Coast Guards. By working together, the two Coast Guards ensure scheduled vessel traffic can move through the shipping channels and into and out of community harbors.

According to the CCG, the icebreaking vessel Martha Black has been assigned to the St. Lawrence Seaway. The season will open at the Welland Canal on March 19, 2021, at 8 a.m., with the Montreal and Lake Ontario Section set to open on March 22 at 8 a.m.

Shipping on the upper lakes began in 2020 with the opening of the Soo Locks in Sault Ste. Marie during the early hours of March 25. The Twin Ports grain shipping season opened on April 8, 2020, with the arrival of the first saltie.

American and Canadian ports in the Great Lakes-St. Lawrence Seaway system reported that overall tonnage during the 2020 navigation season was down just 1.7% compared to the 2019 navigation season, despite facing a challenging year. Craig H. Middlebrook, Deputy Administrator of the U.S. Great Lakes St. Lawrence Seaway Development Corporation said, "The Seaway's 62nd navigation season was one of the most remarkable in history. Despite all the challenges throughout the year, it was one of the safest and smoothest seasons on record. The final tonnage results continue to demonstrate the resilience of the binational waterway and its ability to remain competitive in the global marketplace."

The 2020 Seaway Tonnage Report, published on Jan. 19, 2021, noted that throughout the unprecedented year, several ports across the Great Lakes-St. Lawrence Seaway System saw major increases in wind cargo. For example, the Port of Duluth-Superior saw an increase of 219,000 freight tons in wind cargo compared to 2019, the port's previous record-breaking year.

"Looking beyond the numbers, this port's emergence as a wind cargo hub is an important win for cargo diversity and also for the expansion of renewable energy nationwide," said Deb DeLuca, Executive Director of the Duluth Seaway Port Authority. "It's been a difficult year under the cloud of a global pandemic, but this freight tonnage record is a much-appreciated highlight, made even better by the fact that Duluth Cargo Connect set records in consecutive seasons."

Great Lakes-St. Lawrence Seaway grain tonnage was up 27.1% at 13,308,000 metric tons in 2020. Middlebrook noted in a Seaway news release last fall that, "Grain products shipped over the Seaway are used to produce everything from bread, pasta, soymilk and vegetable oil to beer, ethanol, and animal feed. Shipping through the Seaway helps our U.S. farmers compete effectively in a global market." 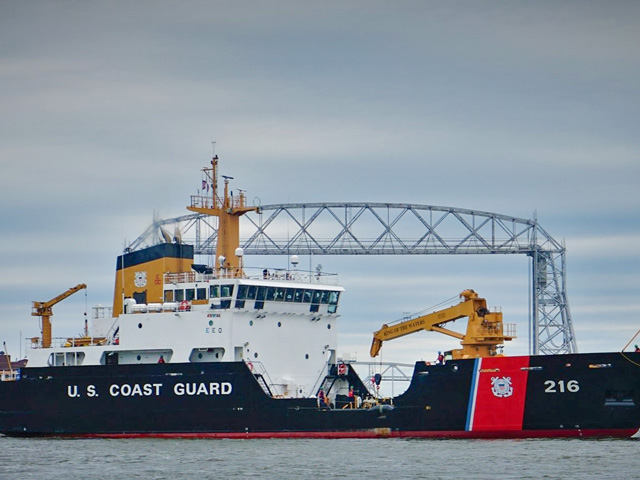