Located at the westernmost tip of Lake Superior, the Port of Duluth-Superior is North America's farthest-inland freshwater seaport. A remarkable 9-mile natural breakwater shelters the port's 49 miles of harbor frontage. Twenty privately owned bulk cargo docks and an award-winning general cargo terminal populate the working waterfront, along with a marine fueling depot, a shipyard with dry docks, multiple tug and barge services, plus an intermodal cargo termina1, according to the Port Authority website.

In the midseason tonnage report released in mid-September by the Duluth Seaway Port Authority it was noted that after an early summer surge, maritime tonnage through the Port of Duluth-Superior slowed atypically in August, amidst a tepid recovery from COVID-19 induced lows.

Total tonnage stood 31% behind the 2019 pace through Aug. 31, driven primarily by declines in coal and iron ore tonnage (down 59% and 26% respectively). The COVID-19 pandemic catalyzed those drops, shuttering industrial facilities and reducing demand for electricity and steel. Despite the reopening of many such facilities and an incremental return to more typical consumption, the United States' steel capability utilization rate remained at 65.1% during the week ended Sept. 12, compared to 80.3% during the same period in 2019, noted the report. The Port of Duluth-Superior's diminished 2020 tonnage reflects this steel production disparity, as Minnesota provides approximately 80% of the iron ore used in America's first-pour steel.

On a more positive note, outbound grain and inbound wind energy cargoes emerged as the season's first-half highlights in the Port of Duluth-Superior. North American wheat shipments pushed grain tonnage 14.5% ahead of the 2019 pace through Aug. 31 and 7% above the five-season average. Jayson Hron, Director of Communications and Marketing, Duluth Seaway Port Authority, told DTN on Dec. 29 that "the Port of Duluth-Superior was well on its way to surpassing 1.2 million short tons of grain floated in 2020."

"If this pandemic-plagued shipping season was a prospector's pan, there'd be a lot of black sand and only a few golden nuggets," said Deb DeLuca, executive director of the Duluth Seaway Port Authority. "But even a few golden nuggets are cause for excitement, and we're certainly pleased to see strong grain numbers and potentially record-setting success with wind cargoes."

Shipping activity remained strong in the Port of Thunder Bay right into the last few weeks of the season. Thunder Bay is a large bay on the northern shore of Lake Superior and is Canada's westernmost port on the Great Lakes, and the end of Great Lakes navigation. As of November 2020, shipments of grain there exceeded the five-year average volumes every month for the 2020 shipping season and it was expected that December would likely continue the trend.

Increased demand for Canadian grain in Europe, the Middle East and Africa has led the port to a 20-year high for cargo tonnage. Prairie grain accesses these markets via Thunder Bay, according to the Lake Superior News.

Thunder Bay was visited by 156 foreign saltie vessels during the season, the second highest total in port history. Laker visits exceeded 300, the five-year average, with up to 20 more expected before the Soo Lock closure in mid-January. Lakers ship to ports within the Great Lakes Seaway system, while salties carry cargo directly overseas. Most Laker-shipped grain is transloaded in the St. Lawrence River to salties for export.

The Port of Thunder Bay is projecting final overall cargo volumes of 10 million metric tons (mmt) for the first time since 1997. The 10-mmt tally represents a 14% increase over the port's five-year average. The Federal Hudson was the last saltie moving off Lake Superior for the season; it locked downbound on the morning of Dec. 26 headed for Montreal, and eventually, overseas with grain, according to Great Lakes and Seaway Shipping website. 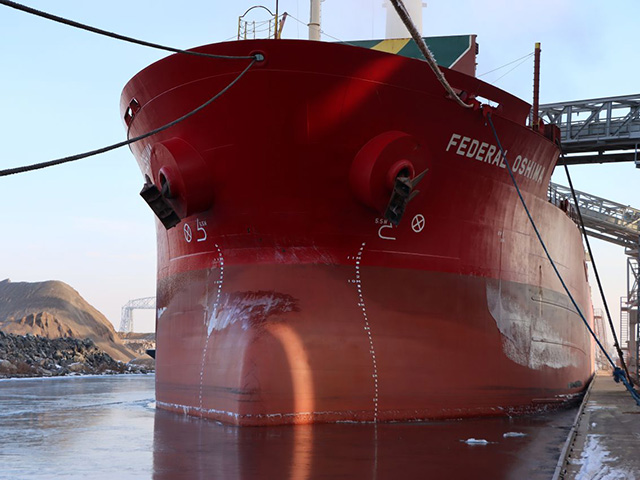