Here is a link to that story discussing the challenges faced for farmers that affected most of their planning intentions this past spring: https://www.dtnpf.com/…

"What a difference a couple of years make!" said Keith Brandt, general manager of Plains Grain and Agronomy in Enderlin, North Dakota. "We are over 95% complete with the corn harvest and probably averaged about 16% moisture. Most everybody is disappointed on the yield because it didn't come out what it looked like it could do. We are 170 to 175 bushels per acre (bpa) versus our expectation of 15 bpa better. We are seeing the best basis we have seen at harvest in years and it will only get better. Only about 60% of the corn has been marketed, with the balance in tight hands."

Brandt added that due to the unharvested 2019 corn standing in the field this past spring, 40% of their corn acres were prevented planting and farmers that normally have 3,000 to 4,000 acres of corn, had 500.

Cory Tryan, grain department manager at Alton Grain Terminal LLC in Hillsboro, North Dakota, said "We finished up a week ago with the corn harvest that we had (40% of intentions). Yields were very disappointing and below average in the 160s, as were the bean yields being below average in the low 30s. Quality is good with the corn at 54 lbs. or better test weight and very little BCFM (broken corn and foreign material). Most the crop came off in the 14% to 17% moisture range. Fall field work is wrapping up and will all be finished this fall for the first time in three years."

"Our corn harvest was a little different this year from last," said Kerry Baldwin, Hope, North Dakota. "We only got less than one-third of our acres seeded. Last year we finished our corn harvest on Dec. 8, this year we were done by Oct. 13. Last year our corn ran in the lower 160s, this year our yield was around 155. Test weights this year were around 56 lbs. compared to the low 50s last year. Our moisture in the corn this year was 16.5% compared to 26% last year. The difference between the last two years is amazing. It would have been nice to have more acres seeded but we were too wet this last spring."

Darrin Schmidt, who farms in eastern North Dakota, said, "It's a good thing we had a lot of prevented planting (PP) acres on early seeded crops. Corn is following wheat in that the yield is way down. Some corn is so down on yield, insurance will kick in. The only good part is the corn was 13% to 17% moisture, so we aren't even going to mess with the dryer."

Schmidt added, "Basis is historically better than normal, which is awesome. We're at $0.30 under the December contract when we are usually $0.65 to $0.70 under. We can sell $4.00 cash corn, which is pretty unusual for North Dakota; it would be a good year to have huge bushels to sell, but we don't. Soybeans are also a good basis after China started buying again."

"Corn harvest in northwest Minnesota was much different than that of 2019," said Matthew Krueger, East Grand Forks, Minnesota. "Yields were about 20% less than expectations but in line with insurance guarantees. This seemed to be very widespread in the Red River Valley. On the fringes of the valley, I heard yields were more on target or 10% to 15% better.

"Only plus is the price being stronger than budgeted, so it came out being a wash. I believe the excess rain in June did the first number, and then the excessive heat did more harm than realized. Quality was good and it came off dry. It was hard to get samples to be clean, but since we only got 5% of our corn planted from the original planned acres (due to a late spring), it was probably for the best." Krueger added that they were able to get a "ton of fall work done, which was very needed! Hopes are definitely up going into 2021, more than they were last year."

Kenny Reinke, Neligh, Nebraska, said that this past fall was more "normal" than in the past. "Corn was definitely raced to the finish line, but for us with irrigation that can actually be a good thing. Soybean harvest wrapped up quickly, which meant corn harvest was looking to be ahead of schedule," said Reinke.

Reinke said that, "Hand samples had us holding off for a week to 10 days as we were finding moistures of 19% to 21% and normal in most areas, but here, where we mostly field dry, it was worth waiting, especially with all the good drying weather forecasted. The guys with pure dryland fields were able to roll right on into corn harvest from soybeans.

"In normal Nebraska corn harvest fashion," said Reinke, "we have been interrupted three times by snows that have moved through. We also went through a couple of mornings of exceptional cold for the time of year with a low of 10 degrees in late October. In a way, the moisture has been a blessing as we can finally relax the heightened fire awareness a bit. The irrigated yields have been very good, but some very poor dryland is weighing on the overall average. It's not unusual to see a 150- to 200-bushel difference between the irrigated circles and dryland corners.

Reinke noted that the markets have been interesting, to say the least, and there have been some aggressive basis moves with processors battling to get ownership of grain to fill their needs. "As of late, we are running to the narrower than average side but feel the pressure to widen is right there with every higher day on the CME."

Quentin Connealy, Tekamah, Nebraska, said that yields were all over the board due to lack of 12-inch moisture through this summer's drought. "We are 60% irrigated on our farm, and that really helped fight the drought this growing season. Dryland did OK but still call it below average on the soybean and corn side. I was expecting a little better on our irrigated crops, but I will take what we made and go with it as bad as the drought had gotten. The good ground really shined and the bad ground really showed its "badness" as some of the yields really dropped in those areas."

Connealy added that basis and prices were pretty solid through harvest and they delivered quite a bit to the elevator, as it was hard to store too much at current higher prices. "Our main reason for storing was logistics because we could get it to the bin faster and keep the combine moving if we weren't hauling to the local finishing plant and waiting in line during their short open hours. Average basis through corn harvest looked to be in that $0.12 to $0.13 under area with highest basis being around $0.12 under December, and just today (Nov. 12), basis went to option the December. That's pretty wild, but most farms are done with harvest so they must be needing some of the binned corn already after a pretty big ice storm in the area on Nov. 9-10.

Ryan Wagner, Roslyn, South Dakota, said, "Corn harvest has wrapped up around here, and we have seen basis do nothing but strengthen the entire time combines have been rolling. Spot basis has narrowed up about $0.15 since the beginning of September in the area and is $0.30 better than where we were versus the December futures this spring.

"Quality is excellent with most corn coming out of the field close to 15% moisture with test weight 56 to 60 lbs. versus last year when we had moistures closer to 25% and test weight below 50 lbs. Despite the low moisture we have seen very little header loss. We had the potential for a record crop here, but a dry finish and early September freeze clipped the top end. Yields have been variable, ranging from slightly above average to well below average depending on how much, if any, rain was seen in late July and August."

"What a difference a year makes here in central South Dakota," said Tim Luken, manager Oahe Grain, Onida, South Dakota. "Last year at this time, we were pretty much just getting started with corn harvest, and here we are this year almost all but wrapped up. Last year we dried 100% of every kernel of corn brought into town with moisture averaging 19%, with test weight at 52 lbs. and yields in our area at 130 to 150 bpa. This year, it was lucky if we dried 25,000 bushels.

"This year's harvest started on Sept. 18 in our area and basis at the time of harvest for September and October was $0.60 to $0.65 under the December, and now with harvest wrapped up, basis in the area has narrowed up a bit in the $0.40 to $0.50 under range. Yields this year are ranging from 140 to 190 bpa, depending on who caught some showers during the drier summer than last. Corn moisture this year is right at 14% on average and test weight at 56.5 lbs. overall, making for a great harvest. The next week to 10 days should wrap up sunflower harvest in the area also and that will end our harvest season for the year."

Luken added, "Thanksgiving will mean so much more this year as we all sit around the table and thank Mother Nature for the great season we had." 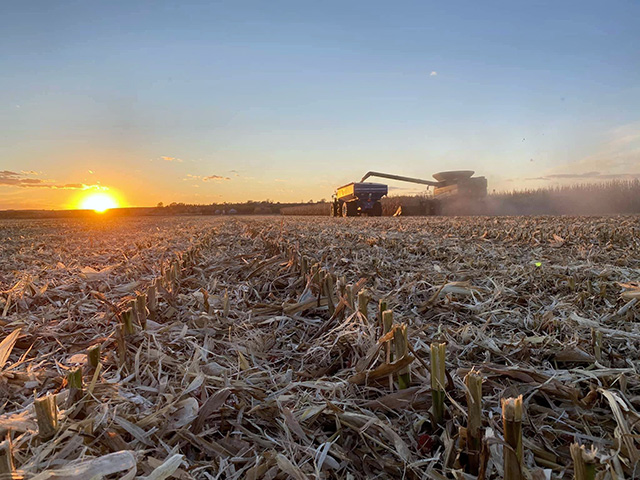