After being closed on July 1, the U.S. Army Corps of Engineers (USACE), Rock Island District, announced on Oct. 29 that lock and dam construction was complete and the Illinois Waterway locks have re-opened to navigation after a series of planned, extended consolidated closures.

"With construction coming to an end at Dresden Island, Starved Rock and Marseilles locks, the Illinois Waterway lock and dam system is open for navigation," said USACE. "Five locks on the Illinois Waterway had been closed since early July in order to perform critical maintenance. Peoria Lock was the first to reopen on Sept. 28 followed by LaGrange Lock on Oct. 13."

The Illinois River is one of the key arteries for the agricultural supply chain. According to the U.S. Department of Agriculture, in 2019, over 6.5 million metric tons of down-bound soybeans and grain passed through LaGrange Lock and Dam, the final Illinois River lock before the confluence with the Mississippi River.

The Illinois River includes eight lock and dam sites that were long overdue for significant repairs, according to USACE. In order to facilitate repairs, USACE Rock Island District developed a consolidated repair schedule, which included a short closure to locks in 2019 followed by extended closures beginning on July 1 and ending on Oct. 29. The closures took place simultaneously to lessen impact to commercial navigation as much as possible. Here is information on the recent closures and includes the next repair schedule in 2023: https://www.mvr.usace.army.mil/…

S&P Platts noted in a June 24 article that ethanol barges typically supply gasoline blending along the Mississippi River and Gulf Coast and that off-river ethanol markets climbed as buyers locked in supply without relying on river barges.

As for grain terminals, those above or in the lock closure areas also faced similar dilemmas. Prior to the closure, basis prices were higher in order for the shippers to get barges loaded and on their way to the Gulf. The unexpected early start to soybean and corn harvest caused many shippers to pile grain ahead of the opening to secure their commitments and to be ready for the opening.

While the closures were a challenge for all businesses involved, the work was necessary and long overdue. "Despite these temporary inconveniences and additional costs, the rehabilitation work on the Illinois River locks is a significant benefit to agriculture and other industries," said Mike Steenhoek, Executive Director Soy Transportation Coalition in an email to DTN in early July. "It does not require a professional engineer to be able to diagnose that it is not a matter of 'if' there would be future mechanical failures at some of these lock and dam sites. It is more a matter of 'when' they occur. The crumbling concrete and widespread rust at a number of these sites, particularly LaGrange Lock and Dam, were evident to even a casual observer."

Steenhoek added that, "We appreciate the Army Corps of Engineers for providing advanced notice of this work so that agricultural and other shippers could develop alternative arrangements during this period when the river is essentially closed for barge transportation. We also appreciate how this work will occur concurrently, rather than subsequently, so that the length of the river closure will be as brief as possible."

Barges heading down the Illinois River to the Gulf meet the Mississippi River near Grafton, Illinois, which lies 25 miles northwest of downtown St. Louis, Missouri. From south of St. Louis and heading into the Lower Mississippi River, tows pushing barges may run into some rough spots where low water has caused shoaling, and in some areas, drafts have been reduced to stop barges from grounding.

Tom Russell, Russell Marine Group Barge, told DTN that transits have been slowed and stopped from time to time due to low water conditions from St. Louis to New Orleans. "A particularly troublesome area has been the Lower Miss from mile 900 to 500 where numerous tow groundings have occurred. Expect low water problems on the Lower Miss to continue as forecasts call for below average precipitation in the Midwest and South. Conditions will have to be closely monitored. Anticipate slowdowns."

Russell said at New Orleans, "Water levels in the Port are on the low side but all ocean vessel traffic and barge traffic are operating normally. Port operations are very busy and will remain unusually busy through the first half of next year. Mild dry weather is forecast through year-end, which will help keep port-loading activities operational with hopefully limited weather delays." 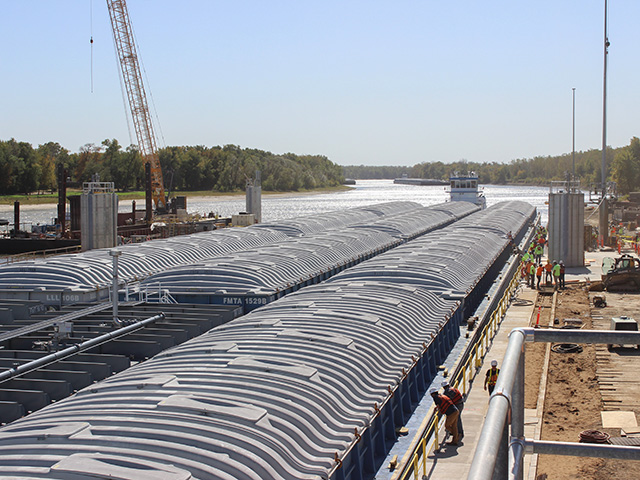