Spring wheat planting was adversely affected in the spring of 2020, especially in eastern North Dakota and northwest Minnesota. Many producers had to deal with overly wet field conditions and an unharvested crop that was still in the field from 2019. In addition, the frost had not come out of the ground in many places by the end of April, further stalling planting. At the end of April, North Dakota was at 5% planted versus their average of 18%, and Minnesota was at 6% versus their average of 30%.

Matthew Krueger, who farms in East Grand Forks, Minnesota, said that yields were very variable based on planting date and stage of plant. "Our biggest impact for the yield loss was a combination of later planting and excessive heat (90-plus-degree days) during flag leaf and flowering stage. Yields were below average and similar in 2020 to 2019," said Krueger.

"Harvest this year started on Aug. 15 and finished on Sept. 10, said Krueger. "Normally it would take no longer than two weeks, but weather is the biggest thing for that. A majority of our wheat came off around 15% moisture as we couldn't wait for it to get dried down fully. Like 2019, the crop did seem to take a while to dry down on the tail end of harvest. We couldn't seem to get the straw to dry down and we were just waiting on that to keep rolling. Our falling numbers remained in the 375-plus for the most part, as well as protein was above average as well as test weight."

Tim Dufault, a farmer from Crookston, Minnesota, said: "Spring wheat turned out to be so-so. Yield for the Northwest area will probably be just below average at around 65 bushels per acre (bpa). In the Crookston area, protein will be about a half a point lower than normal, maybe 13.0% to 13.5%. Test weight and color are good. The August rain didn't affect us as much as I thought it might.

"There wasn't as much of an issue with falling numbers like last year. There was still a pocket from Crookston to Mahnomen that had some fields with sub-300 second falling number tests. The region started the year wet, and all of northwest Minnesota and northeast North Dakota had abundant rainfall from June into August. So, there were some areas with drowned-out wheat and areas where yields lost another 5 to 10 bpa potential."

A shuttle loader in eastern North Dakota told me that the early heat took its toll on the crop in his area. He said that yields were disappointing, averaging in the mid-60s with a range of 30-90 bpa. "However, the wheat averaged 14.7% protein with nice color, and most of it was dark northern spring wheat with an average of 360 falling number. Some of the wheat harvested later did grade northern spring wheat." He added that the vomitoxin (DON) tests showed some presence of DON, but well under 2% with an average of about 1%.

Darrin Schmidt, who farms in eastern North Dakota, said: "Yield was below average overall, with one or two fields that were above average, but everything else below. Test weight was low on that field for some reason, possibly due to the variety. Quality was good except for a couple fields, with protein higher to average and no low protein. There were no falling number issues this year." Schmidt added that he heard yields in his area ranged from poor to good.

Keith Brandt, general manager of Plains Grain and Agronomy LLC in Enderlin, North Dakota, said that their spring wheat quality was better this year than last. "No vomitoxin issues and only very minor falling number issues, with a 14.6% protein average and yield average of 55 bpa."

Brandt added that, at best, most growers will only break even on wheat this year. "This was the least amount of wheat our company has handled at harvest due to less acres planted. We are still battling wet field conditions in our area. Some of the prevented planting (PP) acres still have not been worked and potholes are as full as they have been all season. We are pretty cautious about what next spring might bring here. Maybe another big PP year again?"

In western North Dakota, Allan Klain, who farms northwest of Turtle Lake, North Dakota, said: "The early seeded wheat went too long in June without rain and was significantly lower in yield than later seeding date wheat. Lighter soils showed up too. We went 35 to 75 bpa on yield with 16 protein average."

Paul Anderson, Coleharbor, North Dakota, said that his wheat quality was good and yields were about 55 bpa. "North of Garrison, there is lower protein wheat and lots of 55 bpa wheat."

Matt Undlin, a farmer from Lansford, North Dakota, said his wheat yield was 75-95 bpa. "The 75-bushel field got hailed on late, and overall, we had perfect color and 65-pound test weight."

North Dakota Wheat Commission, in their weekly crop progress report on Sept. 16, noted that quality continues to be good on the 2020 spring wheat crop. "The spring wheat harvest is nearing completion with the most recent USDA Crop Progress report indicating that 92% of the U.S. crop has been harvested, similar to the five-year average. The bulk of the harvest season took place under good weather conditions, allowing for smooth harvest pace and very few quality issues. As we get further into September, temperatures tend to trend cooler and harvest days become shorter, so producers appreciated the improved harvest situation compared to the extended, troublesome harvest of 2019."

SOUTH DAKOTA AND MONTANA REPORTED A BETTER HARVEST VERSUS 2019

I spoke with a merchandiser in Montana who told me that this year's spring wheat crop had above-average yields across the state and were up on average approximately 12-15 bpa. The higher yields, however, produced a lower-than-average protein. Montana normally raises a 14-protein spring wheat crop, but this year, the protein will average closer to 13% to 13.5% Test weight will average 60-61 per bushel and dark hard vitreous (DHV) kernels will be in 75-80 range, with falling numbers in the 330-350 range. A mild growing season caused the higher yields, and Montana didn't experience the hot temperatures to stress the crop.

Ryan Wagner, a farmer in Roslyn, South Dakota, said: "We started harvest on Aug. 8 and finished up on Aug. 25, but it took longer due to the varied maturity because of a stretched out seeding this spring. Pretty much an average crop here this year with yield right around the farm actual production history (APH), and given that we didn't finish seeding wheat until May 20, we'll take it."

Wagner added that, "After two years of struggling to get harvest complete due to wet weather, harvest was a breeze this year with the dry August and we have the quality to show for it. We have had no issues with DON or falling numbers and just a little bit of ergot but nothing out of the ordinary, with test weights consistently in the 62- to 63-pound range. Protein has varied from the mid-13s to the upper 14s, which is a little lower than we'd like to see, but in general, I'm pleased with our wheat this year."

Tim Luken, manager Oahe Grain in Onida, said in his area of central South Dakota, harvest started around July 15 and ended around Aug. 11. "It was finally enjoyable to receive nice-quality grain compared to the last three years and we have something to work with this year," said Luken. "Mother Nature was finally good to us during harvest even with some rain and fog delays that helped the row crops but didn't deteriorate any wheat acres.

"Yields were very good in the 60- to 85-bushel range. I heard a lot of 70s being talked about. The early part of harvest proteins were lower, in the upper 12% to lower 13%; as harvest progressed, protein increased toward the end to upper 13% to lower 15% with our average at 13.9%. Test weight was very good all the way through harvest, running 60 to 64 pounds and ending with an average of 61.5. It will be great to finally have a crop we can market without any issues," added Luken.

U.S Wheat Associates noted in their weekly harvest update that, overall, the industry reports that later-planted spring wheat had more favorable yield prospects than fields seeded earlier. As of the Sept. 18 harvest report, average protein was at 14.5% versus the final 2019 number at 14.4%. Test weight was steady at 61.6 pounds, higher than last year's final average, and the falling number average is 392 seconds, indicating a sound crop to date. Average vitreous kernel content was steady at 64%, making the current average grade of the 2020 spring wheat crop a U.S. No. 1 Northern Spring (1 NS).

Here are the FDA guidelines for allowable vomitoxin: https://www.fda.gov/…. 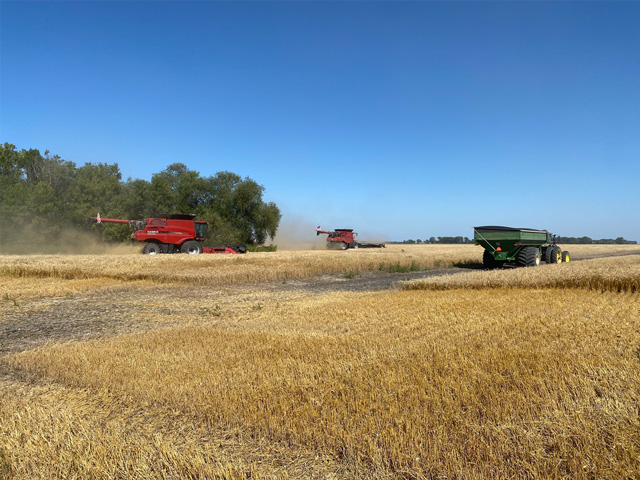