A virtual update on Tuesday, July 28, featuring video and comments from state wheat commissions and producers in the main four-state spring-wheat-growing region of the U.S. provided a look at the 2020 spring wheat crop. The North Dakota Wheat Commission and North Dakota Grain Growers sponsored the event in lieu of the 2020 Wheat Quality Council Spring Wheat Tour, which was canceled due to the COVID-19 pandemic.

Jim Peterson, policy and marketing director for the North Dakota Wheat Commission, started the update by giving an overview of the importance of U.S. HRS wheat to the U.S and to customers worldwide. He reminded those watching Tuesday's pre-harvest update webinar that, in recent years, 54% of total U.S. spring wheat production has come from North Dakota, 20% from Montana, 14% from Minnesota, 8% from South Dakota and 4% from the Pacific Northwest.

That percentage may shift some this year, Peterson noted, as there was a lower overall planted area for the 2020 crop. The largest drop in acreage was in North Dakota, followed by Minnesota. Meanwhile, acres increased in Montana and South Dakota. North Dakota faced the most planting problems this spring due to wet soils and unharvested 2019 crops -- mostly corn, but also some spring wheat. There was good subsoil moisture due to the historically wet fall in 2019, but there was some dry topsoil in western areas. North Dakota also saw a "notable level of prevented planting acres" because of the problems faced in the spring, Peterson said.

Various producers from North Dakota who spoke during the webinar described this year's HRS wheat as "a tale of two crops": early planted versus late planted. They also noted that the later-planted crop was mostly in better shape than the early planted crop. The consensus was that, in many areas of the state, thanks to the wet fall, the subsoil moisture was helpful to rooting the spring wheat, especially where there was drought stress in June. There was also concern in many areas about wheat scab disease. However, the consensus was that the North Dakota crop would yield close to USDA's prediction of 45 bushels per acre (bpa). Some producers said they thought yields could be below or close to average, but harvest is still three to four weeks away.

In Montana, Sam Anderson from the Montana Wheat and Barley Committee noted that the state's crop recently had the highest good-to-excellent rating of the four main HRS-wheat-growing states. The July 26 NASS Montana crop progress report estimated the state's HRS crop condition at 80% good to excellent. Subsoil moisture in the state was rated 77% adequate to surplus compared to 71% the previous year.

Anderson noted that it was too cold in June for crop development, but July warmed up and timely rains have helped the crop. He noted that, because it was hard to plant winter wheat last fall due to a September snowstorm, this opened up more acres for spring wheat to be planted.

Adam Carney, representing District 1 of the Montana Wheat and Barley Committee, from Scobey, Montana, said his area has had good moisture, but now it was time for the rain to shut off. He noted they could use some heat in his district and said harvest is, at best, four weeks away. He estimated spring wheat and durum yields could range from 40 to 50 bpa.

Before he talked about the spring wheat crop in South Dakota, Reid Christopherson of the South Dakota Wheat Commission mentioned that the state's hard red winter crop could be the "best ever." He said that South Dakota's HRS wheat crop, so far, has low disease pressure, and about 10% of it has been harvested. He said that he expects a good harvest and that yields will exceed USDA's prediction.

I spoke to Tim Luken, manager of Oahe Grain in Onida, South Dakota, after the presentation, and he told me he has taken in about 175,000 bushels of new-crop spring wheat with excellent quality of 61 pounds, good color and a 13.6%-protein average. He told me he hasn't heard much on yield yet because it is still early in harvest, but he said 45 to 60 bpa is a close estimate as of now.

Meanwhile, northwest Minnesota has had a rough year since last fall, according to Jochum Wiersma of University of Minnesota Extension. He said fall 2019 was the "gift that keeps on giving, as rainfall has been 200% to 300% of normal so far." Wiersma said that very little tillage took place last fall, and little fertilizer had been applied. "Some ground was seeded on time, and some not at all," said Wiersma. "The crop that was mudded in needed rain in May and June, and there were some rains. But July got hot and more rain came, and with the heat and storms came high dewpoints. The corn crop is happy, but not the spring wheat. Cool nights are essential to the growth of spring wheat, and they haven't been."

Wiersma said he thinks USDA has overstated how much of the Minnesota crop is in good-to-excellent condition. In its July 27 Crop Progress report, NASS estimated that Minnesota's spring wheat crop was in 66% good and 9% excellent condition. Wiersma said scab is prevalent in the state, and the late-infected crops will be hard to clean out. In the end, that could affect the quality of the crop, he said. Heavy scab infestation can cause higher vomitoxin (DON) levels in grain and may cause wheat to be rejected at destination if it is above 2 parts per million. Wiersma said the consensus is that USDA's estimate for Minnesota spring wheat yield of 57 bpa is on the "optimistic side."

While the virtual update on Tuesday was much different than the Wheat Quality Council's in-person spring wheat tour where scouts walk fields and specific yields for different areas and an overall tour yield are calculated, it was a great representation of how the crop is doing in all four major spring-wheat-producing states.

Wiersma did tell those of us watching the webinar that we should be glad we were not out in fields this week because "Some of you would lose your boots in the soft ground." His comment reminded me why I take two pairs of boots on wheat tours: During a previous year's tour, I saw a fellow scout lose a boot in the mud. He didn't have a backup pair and was not comfortable wearing a wet, muddy boot after we dug it out.

You can watch a recording of the virtual spring wheat tour on the North Dakota Wheat Commission website at: https://www.ndwheat.com/…. 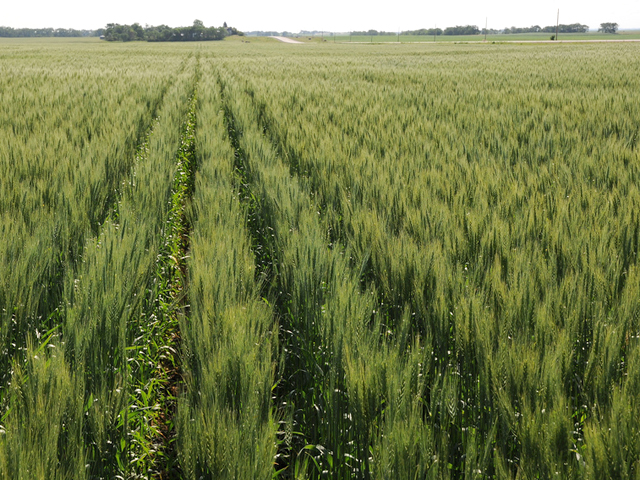