As harvest time approaches for the United States spring wheat and durum crops, domestic and international customers are anxious to get the latest crop information. Because the 2020 Wheat Quality Council's Annual Spring Wheat Tour will not be a "hands on" event this year due to COVID-19, many in the industry will miss the opportunity to see the crop potential firsthand.

Representatives from NDWC, NDGGA, farmers and wheat commissioners from Minnesota, Montana and South Dakota will be reporting on the crop conditions, production, quality outlook and other important issues that have affected the 2020 spring wheat and durum crops, noted the NDWC website, while Wheat Quality Council Executive Vice-President Dave Green will provide an update on the Wheat Quality Council. North Dakota State University Extension experts will provide agronomic and disease updates, and producers will provide in-field video shots and a first-hand discussion of crop conditions and maturity levels throughout the spring wheat region.

If you would like to register, here is the link providing the agenda and registration: https://www.ndwheat.com/…

I contacted some producers and elevator managers on July 22 in North Dakota, South Dakota and northwest Minnesota and asked them how the crop has fared since we last talked at planting time. It's definitely a mixed bag of conditions given the delay to spring planting and excessive moisture in many spots.

"Our spring wheat crop looks to be average to slightly above average this year," said Ryan Wagner, a farmer in Roslyn, South Dakota. "Winter wheat yields across the state have been phenomenal so far, but winter wheat had an even larger head start on spring wheat than normal in our area due to delayed hard red spring (HRS) wheat planting."

Wagner noted that they had a fairly warm June and have had some other spells of extreme heat, but it has come with humidity and ample soil moisture. "I don't think the spring wheat has suffered too much, but given the weather, I don't expect spring wheat to be the bin buster that winter wheat has been. It looks like we are a good two to three weeks away from finding out for sure what we have, but overall things look pretty good and it's all standing nicely yet despite a few wind/rain events over the last few weeks. Fungicide was applied in a timely manner, and I think we'll need it this year because we have had a lot of humidity with lots of dew hanging around most of the morning during grain fill," said Wagner.

Tim Dufault, a farmer from Crookston, Minnesota, said, "The wet pattern that started during the 2019 wheat harvest is continuing for northwest Minnesota and northeast North Dakota. My farm has received 11.9 inches of rain since June 1. Wheat is holding up well though. Not sure about disease pressure. The flowering stage for wheat occurred around the Fourth of July week. From that week on, we have had many rain events or mornings with heavy dew. A majority of spring wheat gets a fungicide treatment, but with low crop prices some growers have skipped this treatment trying to save money."

Dufault noted that the growing season has been above normal in regard to temperature also. "This has me worried most about the effects to yield and quality. My gut tells me the state will not be seeing anywhere near trend-line yields. Harvest should be firing up in the first week of August."

Bryan Kenner, Maddock, North Dakota, told me his spring wheat looks pretty good. "We got a late start seeding, then had dry conditions in June followed by a very wet July. I think yields will be above average but am concerned about quality. I am concerned about scab and vomitoxin as wet as we've been. It's hard to predict it. Usually can tell closer to harvest but still too early to tell for certain here."

Keith Brandt, general manager of Plains Grain and Agronomy in Enderlin, North Dakota, said that, "Spring wheat planted by mid-May looks good. Good yield potential and with current conditions we shouldn't have the quality issues of high vomitoxin and low falling numbers as last year. The later wheat looks good but has a thinner stand and not the yield potential as the earlier wheat. Hoping for good quality there too. Biggest issue is planted acres. Only about 50% to 60% of the wheat acres in our area got planted."

Cory Tryan, grain department manager at Alton Grain Terminal LLC in Hillsboro, North Dakota, said that the wheat crop in his area headed short, has an average stand and is filling nice. "We are getting on the wet side again so quality and field conditions are a question mark yet depending on rains the next few weeks. Looks like harvest around here is three to four weeks away yet," said Tryan.

Stay tuned. DTN will provide the results of the virtual spring wheat pre-harvest update after it wraps up. 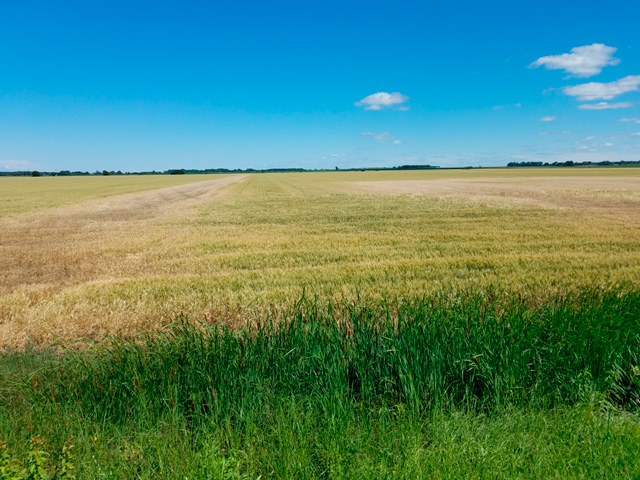