The big white combine got its name from, you guessed it, a hailstorm that destroys or severely damages a farmer's crop. Depending on the time of the year and the stage of the plant, it can mean the end of the growing season or substantial yield loss.

According to an April 2020 National Insurance Crime Bureau (NICB) Hail Report, Colorado had the second highest number of all hail claims in the U.S. from 2017-19 (380.066), second only to Texas. Texas was the top state in all hail loss claims from 2017 through 2019 with 637,977 hail claims, with the exception of 2018, where Colorado had the highest claims. NICB noted that there were 5,382 major hailstorms in 2019, according to statistics taken from National Oceanic and Atmospheric Administration's (NOAA) Severe Storms database. In 2018, 4.610 major hailstorms occurred, resulting in $810 million in property and crop damage.

While this report covers all hail damage claims in the U.S., you can see that many of the states are agricultural states. In fact, the top five states for hail events in 2019 listed by the study were, in order, Texas, Kansas, Nebraska, South Dakota and Colorado. The top eight states filing hail claims above 100,000 in 2017-19 were in order, Texas, Colorado, Nebraska, Minnesota, Illinois, Kansas, Missouri and Iowa.

As far as agriculture coverage from hailstorms, crop hail insurance coverage is available to ensure the portion of the crop not covered under federal crop insurance policies by paying out most of the liability, with an increasing payment factor before a loss would be payable under a Yield Protection or Revenue Protection plan, notes Farm Credit Services of America on their website. In other words, crop hail insurance is a private, separate plan from Federal Crop Insurance Corporation (FCIC).

CAN PLANTS RECOVER FROM HAIL? IS REPLANTING AN OPTION?

On Saturday July 11, a thunderstorm spawned severe weather across an exceptionally long streak in western Minnesota. With high winds and rain, a significant swath of large hail fell from near Willmar and continued into Nicollet County, devastating corn, soybean and sugarbeet crops in a 60-mile long and six-mile wide path. Hail as large as 2.5 inches in diameter was reported in areas of southwestern Minnesota as well, including a stretch in Jackson County, resulting in significant crop damage, according to the University of Minnesota Extension.

Minnesota actually had an early planting season and has seen unseasonably warm temperatures in late June and early July, making the corn and soybean crops in Minnesota developmentally more advanced relative to recent years. Most corn fields are tasseling, and according to the July 13 USDA Crop report, 21% of Minnesota corn fields are silking, which is 6 percentage points ahead of the five-year average. Sixty-seven percent of soybeans are blooming, compared with 42% in the past five years and 10% are setting pods, which is 5 points ahead of the average.

Local news station WCCO-TV spoke to Seth Naeve, Extension soybean agronomist, and Dave Nicolai, Extension educator, as they surveyed some of the hard-hit fields. "The few leaves here are very tattered," said Nicolai as he looked at the damaged corn. "We have stalk breakage and bruising from hail stones themselves."

A couple hundred yards away, Naeve was looking over soybeans and said, "For this time of year, this is really significant. While soybeans may re-grow, they won't come close to the yield they were on pace for. It's a tough break for this area in what's otherwise been a grade-A growing season across the state."

According to a July 15 blog written by Naeve, Nicolai and Liz Stahl, Extension educator, soybean plants with significant amounts of green leaf tissue remaining are likely to survive early-season hail damage, as they can regrow from axillary buds located at the juncture of the stem and leaves. Soybean plants entirely stripped of leaf tissue, however, will not recover.

As for replanting, the blog noted that, at this time, "Replanting should only be considered in fields where the crop is a total loss, and replanted soybeans would be considered a cover crop for weed control and soil health. Soybeans planted in late July will yield much below 50% of optimal if they can reach maturity before the first killing freeze."

The Extension said that, for corn, the keys to storm-related damage of corn fields are to: 1) be patient, 2) determine the crop growth stage and 3) assess plant health accurately. "Go ahead and view the damage, but do not make any assessments until seven to 10 days have passed. It will take that long for the corn plant to begin growing again, if it can," noted the blog.

The unfortunate timing of the July 11 storm is that some fields were just starting to tassel and pollination is expected to be severely affected where damage was extensive. "Any green leaf area remaining on a plant will contribute to yield if pollination was successful. Only consider leaf area to be lost if it is removed from the plant or is brown and dead," noted the Extension.

While replanting corn or soybean for grain yield is not realistic at this late date, the Extension has provided resources containing useful information regarding crop yield loss estimates after hail damage. That information and more can be found in the July 15 blog: https://blog-crop-news.extension.umn.edu/…

While farmers have their choice of mostly green or red combines, nobody has ever purposely chosen the white one. That one is the unwelcome color only chosen by Mother Nature. 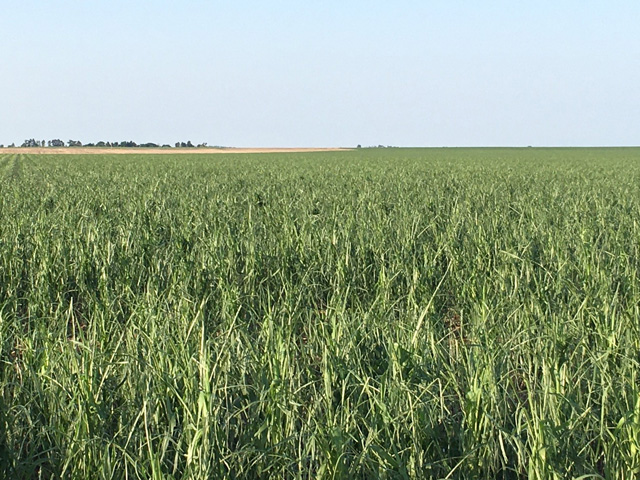