Spring flooding has become an obstacle for barge traffic reaching the Mississippi River in St. Paul. While the river there did fall below minor flood stage late last week, there are still high water issues east of downtown on the Minnesota River at Savage. The Minnesota River is a tributary of the Mississippi River and joins it south of the Twin Cities of Minneapolis and St. Paul, near historic Fort Snelling. The National Weather Service reported on April 12 the river stage was at 702.6 feet, slightly above flood stage. "The impact above flood stage causes barge loadings to stop at Port Cargill and other flood prevention measures begin," noted NWS.

River conditions worsen heading in to the Lower Mississippi River (LMR) which has actually been under siege most of time since late December 2019. Vicksburg, Mississippi, was above major flood stage at 50.24 feet on Easter Sunday. Tows that continue to move through here, heading north and south, are subject to all safety protocols, reduced barge strings and in some spots, like Vicksburg, are subject to daylight only transit.

So far, river basis for corn and soybeans remains mixed and has not been negatively affected by the high water on the river system. Given the slowdown in export demand at the Gulf, there hasn't been much change in basis because of flooding. Barge freight is cheap right now in most regions and demand for freight is flat. That is due to high water at some terminals and the fact that southern farmers are in the field right now and have slowed grain movement.

After heavy rains in the Mississippi and Ohio river valleys increased river stages, causing the Mississippi River at the Carrollton gauge to rise near flood stage of 17 feet, the Corps opened the Bonnet Carre spillway on April 3. Since that time, there were a total of 90 bays opened as of April 10. The U.S. Army Corps of Engineers New Orleans District noted on their website, "Current forecasts project an operation of three to four weeks, however, duration of the opening will be dictated by actual conditions. Operation of the structure will relieve pressure on main line levees, maintain river stages and regulate the flow downriver from the spillway." On April 12, the Mississippi River at Carrollton gauge was at 17.24 feet.

American Commercial Barge Line noted on their website the recent opening of Bonnet Carre "was the 15th opening since its installation in the 1930s. This is a record-setting third year in a row for this flood control structure to open, following the longest-ever 123-day opening in 2019. During this current opening, Bonnet Carre anchorages will be closed at Mile Markers 127-129. The 2020 opening of the spillway highlights how significant the current flood conditions are and how they have affected the industry over the last three years."

Flood conditions in the LMR are expected to remain until early May, given the current river stage at Baton Rouge at 43.49 feet on April 12. NOAA forecasts Baton Rouge to remain above flood stage at least through the end of April. NOAA has stated that at 43 feet, shipping and industrial activities are significantly affected, as unprotected low-lying areas will be flooded and agricultural operations will be impacted on the west side of the river.

If these rain events continue in the LMR and down into Baton Rouge to the Gulf, current flood conditions could extend, adding to a story that is beginning to resemble 2019 there.

Here is the link to the NOAA North Central River forecast, which includes the Upper Mississippi River and Red River of the North: https://www.weather.gov/…

Here is the link to the NOAA LMR river forecast: https://www.weather.gov/… 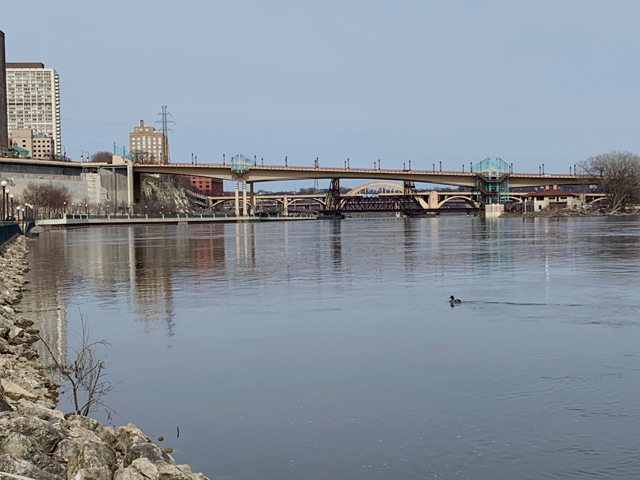