The Columbia-Snake River System in the Pacific Northwest is the nation's single largest wheat export gateway, transporting over 50% of all U.S. wheat to markets overseas.

That all came to a temporary, but very significant, stoppage at the Bonneville Lock and Dam, located about 40 miles northeast of Portland, Oregon. On Thursday, Sept. 5, the lock operators observed issues closing the lock gate and determined that continued operation posed risks of further damage.

The next day, the U.S. Army Corps of Engineers Portland Division issued a contract to inspect and repair the lock after engineers determined the lock had a leak, the Corps noted on its website. On Sept. 7, engineers and experts drained and inspected the lock to assess the needed repairs as Corps contractors prepared to repair the lock.

On Sept. 8, the Corps team determined that the concrete sill (a narrow horizontal ledge protruding a short way into the chamber from below the upper gates) under the downstream gate was the cause of the issue.

"We've started demolition of the damaged sill, which is expected to be completed Tuesday, Sept. 10. After cleanup of the demolition debris, we can begin the repairs necessary to restore the lock to operation," the Corps stated on its website.

The Corps started demolition of the damaged concrete sill at the downstream end of the navigation lock, and by Sept. 12, demolition and cleanup of the sill was complete and drilling through concrete began, noted the Corps.

The final determination and timeline for the repairs came in a Sept. 11 statement by the Portland Engineer District, saying the lock will return to service at 10 a.m. on Sept. 30.

"This lock closure is significant, which is why our engineers, experts and contractors are working tirelessly to ensure we get the locks back in service as quickly as possible," Portland District Commander Col. Aaron Dorf stated in a Sept. 11 news release. "It is not lost on anyone in the Portland District that this outage has tremendous impacts to Columbia River users. Between now and Sept. 30, our teams will be working around the clock to construct the new sill to restore Columbia River traffic."

IMPACT ON FARMERS AND EXPORTERS

I spoke with Bill Flory, an Idaho farmer who grows soft white wheat and malt barley in Winchester and Claremont, on Saturday. As we were talking, he told me he was just finishing his wheat harvest because rains had delayed it. I asked him if he was affected yet by the lock closure, and he told me that, at this time, he was not.

Flory takes his wheat to a river terminal in Lewiston, Idaho, where it then heads to the PNW for export.

"We normally have a distinct advantage here in our ability to move grain from combine to an export vessel within three to four days," said Flory.

"The Corps does an excellent job of repair maintenance, but this latest closure (at Bonneville) was certainly unexpected," added Flory. "Let's hope to get this current repair done on schedule, because there are many barges upstream ready to come down."

I spoke with an exporter who relies on those barges to fill waiting vessels. He said he expects to see more double berthing and increases to both rail and vessel demurrage, while the logistics of loading vessels will be much more difficult.

"Certainly, from an inland shipper standpoint, a force majeure would be applicable, but from an exporter standpoint, I don't see it applying because rail is available," he said.

Within the PNW, there are now three BNSF shuttle loaders and one UP larger train loading station, so shipments could shift in that direction depending on the logistics of possibly handling the surplus, noted the exporter.

"Switching from barge to rail will increase costs of shipping for some exporters and lower margins as well," the exporter said.

The soft white wheat harvest is mainly finished, with the exception of the high line of Washington. That area is where the majority of the effect of the lock closure could be felt on farmers, unless rail cars are available to move the crop. One spot that can load out shuttles in that area is the Highline Grain terminal at Four Lakes, Washington.

INFRASTRUCTURE MUST BECOME A PRIORITY

Flory and I talked about the state of all the locks and dams on the entire U.S. river system. We both agreed it is imperative a new infrastructure plan becomes a reality, with enough money allocated to the USACE before more aging locks and dams fall apart and create monetary losses for farmers if they lose their ability to ship to the river.

The U.S. Army Corps of Engineers has said in the past that it is "unable to adequately fund maintenance activities to ensure the navigation system operates at an acceptable level of performance." A failure of significant duration, especially during and right after harvest, would have a devastating impact on shipments of agriculture products and likely cause farmers to lose money, affecting their profitability. Shippers and exporters, as well as barge lines, would also experience monetary losses.

A Jan. 3, 2018, Washington Post article quoted President Donald Trump: "Infrastructure is by far the easiest," the president said Dec. 22, 2017 during the bill signing for the tax overhaul. "I could've started with infrastructure; I actually wanted to save the easy one for the one down the road. So we'll be having that done pretty quickly."

Fast forward to this past spring when President Trump was set to meet with Democratic leaders at the White House to discuss details of a $2 trillion spending bill for U.S. infrastructure. The meeting actually took place, but CNBC reported in a May 22, 2019, article that President Trump walked out of the meeting. He told reporters in the Rose Garden, "I walked into the room and I told Sen. Schumer and Speaker Pelosi that I want to do infrastructure, but we can't do it under these circumstances." The circumstances he spoke of were that the Democrats supported the Special Counsel investigation of Russian interference in the 2016 U.S. elections and suspicious links between Trump associates and Russian officials, conducted by special prosecutor Robert Mueller.

In the meantime, our aging U.S. lock-and-dam system on U.S. waterways is deteriorating and is in dire need of permanent repair or replacement. Most of the locks and dams were built in the 1930s, and engineers estimated their lifespan at 50 years. The Corps constantly has to put Band-Aids on some of those locks that have deteriorated, because of the budget constraints to do complete replacement.

Tom Russell, Russell Marine Group with locations in New Orleans and Portland, said it best when describing the negative effect on commerce due to the many closures we have seen and continue to see on the U.S. River system so far in 2019: "The dependability of the U.S. conveyor belt is in question ... big time now."

Here is the Sept. 11 news release from the Portland District about the closure: https://www.nwp.usace.army.mil/….

Here is a Columbia-Snake River fact sheet showing where the Bonneville Lock and Dam is located: http://www.dtn.com/…. 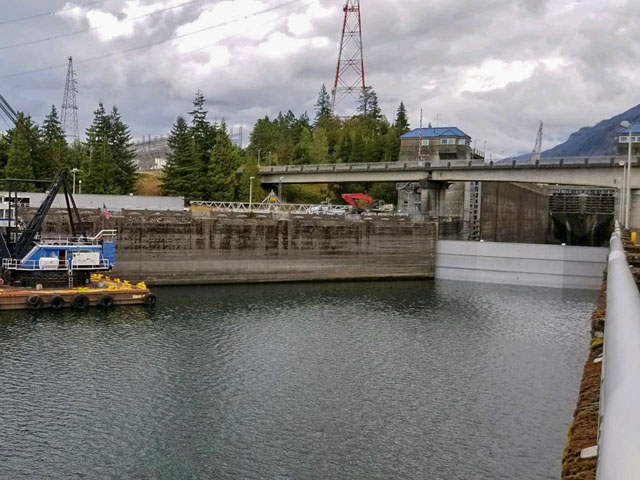