Dave Green, executive vice president of the Wheat Quality Council, told me that the tour route would remain mostly the same and that he has 62 scouts this year versus 56 in 2018. "I am expecting an above average crop," said Green.

According to the North Dakota Wheat Commission's (NDWC) crop progress comments for the week ended July 14, development of the crop remained behind normal in all states with the exception of Minnesota. In Minnesota, 96% of the crop was headed, slightly ahead of the average of 91% for mid-July. North Dakota was 79% headed, South Dakota 75% and Montana 60%. A recent stretch of high temperatures -- upper 80s to lower 90s -- helped accelerate crop maturity some, which should be reflected in the July 22 report and will likely be seen by tour scouts.

I had a chance to speak with farmers and elevator managers in North Dakota, South Dakota and northwestern Minnesota the past week about their expectations for the new crop.

"I think when the tour gets rolling, they will find a little bit of everything. That is what I get from conversations with producers in North Dakota and Minnesota the past couple of weeks," said Tim Dufault who farms in Crookston, Minnesota, and is a board member on the Minnesota Wheat Research and Promotion Council.

"In the northern tier of North Dakota counties and the northeast, it was dry this spring and early summer; dry enough to impact the wheat crop. The western half of North Dakota has generally had timely rains and that wheat looks good. Minnesota wheat areas started to get dry by the end of June and my region received a good soaking rain the first week of July. Our yields should be comparable to last year."

An elevator manager in east-central North Dakota told me that the crop there is average and is not a bumper crop. He expects the tour to see some drowned out spots, and it is still too early to tell if scab will be an issue. Farmers in his area were faced with soft and wet fields, and it was a challenge to get spraying done, but most succeeded. He added that the wheat should be filling nicely with the rains lately.

Keith Brandt, general manager of Plains, Grain and Agronomy in Enderlin, North Dakota, said, "Surprisingly, after how late this spring wheat crop was planted, April 23 through June 11, it looks very good. Granted, that very late planted wheat doesn’t have as good of a stand, but the cooler weather in May and early June is what the wheat crop needed. It seems the majority of the wheat got sprayed with fungicide, so that should limit quality concerns."

Brandt added that he estimates southeast North Dakota yields will be 60 to 65 bushel per acre. "I think our proteins will average 14.0," added Brandt. "It will be close to Aug. 10 before we see some harvesting, with the harvest extending to mid-September. Everybody will be looking for storage because very little was forward contracted." Brandt added that it will take a stronger corn price to pull wheat prices higher.

"I think we are going to have a very good spring wheat crop this year. We had a storm blow through July 19, so there is some lodging now, but it should bounce back for the most part," said Ryan Wagner, Wagner Farms, located near Roslyn, South Dakota. "Starting to see a little scab show up, which isn’t surprising considering the amount of humidity we have had, but it’s still too early to tell just how bad it will be. Between the corn, soybeans and spring wheat, the wheat has looked the best of the three all season. Stands are nice and even, we have had adequate moisture, and it hasn't been too hot yet. We are on the far southern edge of the tour footprint, but I’m guessing they will find above average yields."

Tim Luken, manager of Oahe Grain in Onida, South Dakota, said, "Spring wheat looks out of this world, actually. I do know those that did not spray fungicides are going to have issues with scab. We are about a week away from cutting winter wheat, but scouts may run in to some custom combiners."

Allan Klain, Turtle Lake, North Dakota, said, "In our area, timely rains have kept the crop going. The crop does look good, not super spectacular but above average. Leaf diseases are at a minimum and fusarium infestation seems to be minimal. About 30% was sprayed in the area. We received 2.8 inches of rain starting 10 days ago and that basically saved the wheat."

Klain said that further south and east, more rain has fallen and there is a lot of spraying for fusarium (scab) in that area occurring. "We made the call not to spray, and it seems to be the right one. I saw my first durum field in the area this year, and the farmer shelved it due to likely discounts if harvested. A farmer on Twitter from southwest North Dakota said around Mott, North Dakota, it is a "fusarium hotspot."

I spoke to a durum buyer July 19, and he said he thinks we are going to see above average yields, "for sure in far southwest North Dakota." USDA has production at 58 million bushels, but he thinks it will be more around 63 million bushels.

He added that the "jury is still out" on quality, especially areas reporting scab and he also said some that farmers have told him there could be lower HVAC (hard and vitreous kernels of amber color) because of bigger yields and not enough nitrogen.

NDWC noted in their crop progress comments as of July 14 that the North Dakota durum crop showed a slight improvement in overall condition with a rating of 77% rated good to excellent, up from 74% the previous week. Crop development was behind with 75% headed versus 88% last year at this time.

"Recent rains and stretches of high daytime humidity have raised the disease threats in many areas, especially as the majority of the crop has advanced to the heading stage. As with spring wheat, producers are monitoring the crop and applying fungicides to help manage disease levels," said NDWC.

When I was on the hard red winter wheat tour in 2018, Green told scouts that the tour is the industry's "first look" at the crop. "We know between now and harvest that yields can change, but the tour is a good starting point. It gives us the first snapshot of the new crop wheat," said Green.

Charles Wallace will be covering the tour for DTN this year and you can follow him on Twitter @agcommcharlie and don't forget to follow DTN/Progressive Farmer on Twitter @dtnpf for stories and updates on tour results as well. 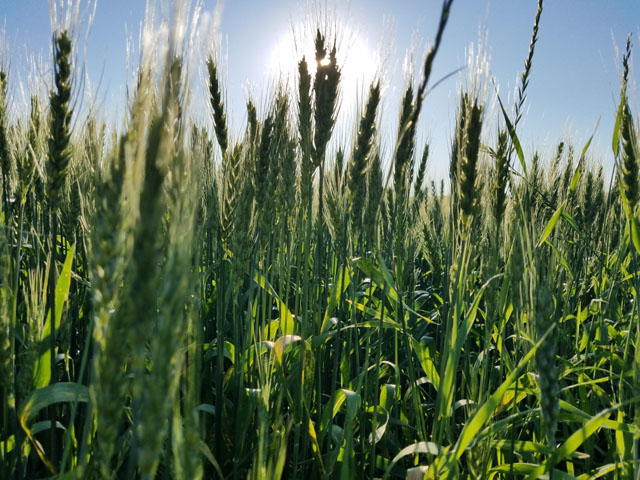