In my March 18 story "Snowmelt, Rain Wreak Havoc on US River Systems" (https://www.dtnpf.com/…), I mentioned that the Mississippi River level in St. Paul, Minnesota, was at 5.8 feet. I watched it meandering through downtown St. Paul as it woke up from its winter hibernation. However, as the days went by and the tributaries west of the capital city began to thaw, all that water and ice headed toward St. Paul.

The ice and snowmelt from the Minnesota River and its tributaries and the snowmelt along the Mississippi River all added to the steady rise of the Mississippi in downtown St. Paul, forcing it out of its banks along the way and pushing it above major flood stage of 17 feet. As of Sunday afternoon, March 31, the Mississippi at St. Paul was at 19.78 feet and crested at 19.83 feet later that evening. (https://water.weather.gov/…)

If you live south of Minnesota, you may be wondering how all of this affects you. All of that water has to go somewhere, and it will head south along its route to the Gulf, pushing water levels to flood stage along its way. This will only add to the high-water conditions that have been plaguing the U.S. river system since the second half of December. All of this means that commerce on the rivers will continue to be compromised, which in turn can cost shippers and farmers a loss in revenue.

If river terminals are unable to load barges because of high water -- or can get them loaded but cannot get them moving to the Gulf in a timely manner -- that means farmers who haul their crops to the river may be stuck with a cheaper basis or the inability to unload their grain.

The Upper Mississippi River (UPR) from St. Paul to Cairo is at flood stage, with seven locks above St. Louis closed as of March 30, according to American Commercial Barge Line (ACBL). Due to the high water moving south, the locks are expected to remain closed into at least the second week of April. The Mississippi River in St. Louis is expected to crest on April 2 at 38 feet. The Illinois River is also at flood stage in some areas, causing significant delays at Marseilles and Starved Rock Locks.

Even when barges make it to the Gulf, that area has been a mess since the end of December. Tow and barge navigation continues to be slowed by high water, tow size reductions and safety protocols that are in place from St. Louis to New Orleans.

"New Orleans and Baton Rouge Harbor areas continue to experience extreme congestion and backlogs," Tom Russell, Russell Marine Group, said on March 27. "Over the last couple of weeks, fog and rains have subsided, which has provided some relief. However, water levels at flood stage still greatly hamper operations. Conditions are dangerous for personnel and vessel/barge operations. Some terminals and loading locations remain closed due to high water levels."

Russell said that, because of the congestion in the port, ships continue to be held in queue off Southwest Pass. "Like anchorage space for vessels, fleet space is now nearing max capacity. Tows trying to drop barges are experiencing considerable delays. Time needed for fleets to deliver barges to terminals has at least doubled," said Russell. "Accidents and near accidents have become a regular occurrence. Due to unrelenting conditions, fatigue has set in with workers on the river, increasing the likelihood of accidents. Fast moving water and currents strain the ability to hold and maneuver ships and barges."

The river in New Orleans was at 16.85 feet on March 31, still hovering at flood stage, and is on a slow fall, according to the National Weather Service (NWS). Once the river falls below 16 feet, strict flood-stage protocols may be lifted. "If no additional substantial rains occur, the river is forecast to fall below 16 feet by the second week of April," said Russell. "However, as water moves down river from the north and precipitation during April is expected to be enhanced in the Midwest and Ohio River Valley, this may slow the fall below the high water mark of 12 feet until summer. Heavy rainfall and severe rains are forecast for the South, including the Gulf Coast and Southeast. Forecasted spring rains and snowmelt will keep flood risk elevated for many areas along the river." (https://water.weather.gov/…)

Normally, at this time of year, the Upper Midwest is preparing for the first tow of the new shipping season to head into St. Paul. The U.S. Army Corps of Engineers (USACE) St. Paul District has been measuring the ice thickness at Lake Pepin since mid-February to determine when the first barge can head north. When they went to measure the ice on March 26, they found only 10 inches of soft ice in the middle of the lake. (Lake Pepin is part of Pool 4 that extends from Lock and Dam (LD) 3 near Red Wing, Minnesota, to LD 4 downstream at Alma, Wisconsin.) While that should have been cause for celebration, it was not.

Besides the flooding in St. Paul stopping barges from coming upriver, there are currently seven locks closed, with three more locks expected to close between April 2 and April 5 on the middle Mississippi River due to the high water and ice flushing downriver, noted ACBL. The lock closures start at Lock 12, UMR mile marker 557, through Lock 24, UMR MM 241. The result of this is that the opening of the 2019 shipping season will be delayed and could end up being the latest recorded start due to the flooding.

According to the USACE, the earliest date for an upbound tow to reach Lock and Dam 2 (near Hastings, Minnesota) was March 4 in 1983, 1984 and 2000. The average start date of the navigation season is March 22. The latest arrival date unrelated to flooding was April 8, 2013. Historic flooding in 2001 delayed the arrival of the first tow until May 11.

While breaking a record for anything may be an honorable event, those of us waiting for the shipping season to open in St. Paul are hoping that a new record is not set in 2019. The current forecast for the Mississippi River in St. Paul is that it will start to fall April 2, but will likely continue to be above major flood stage of 17 feet through the second week of April.

DTN Senior Ag Meteorologist Mike Palmerino said in his Sunday evening forecast on March 31, "Moderate-to-heavy rainfall in the southern and eastern Midwest will keep soils saturated and rivers flooding. Latest guidance indicated at least a light-to-moderate rain event during the middle of this week and a moderate-to-heavy rain event early next week."

As I write this story from Minnesota, it is currently snowing outside my window. Clearly, Mother Nature is not only confused, but as the flooding continues to swamp the Midwest, it is making the spring of 2019 a very difficult one.

Here is the current water forecast for the U.S. river systems from the NWS, and if you click on "Long Range River Flood Risk," you will see the current forecast for April through June: https://water.weather.gov/….

Here is a link to the Weather Channel flood warning for rivers in Minnesota and Wisconsin: https://weather.com/… 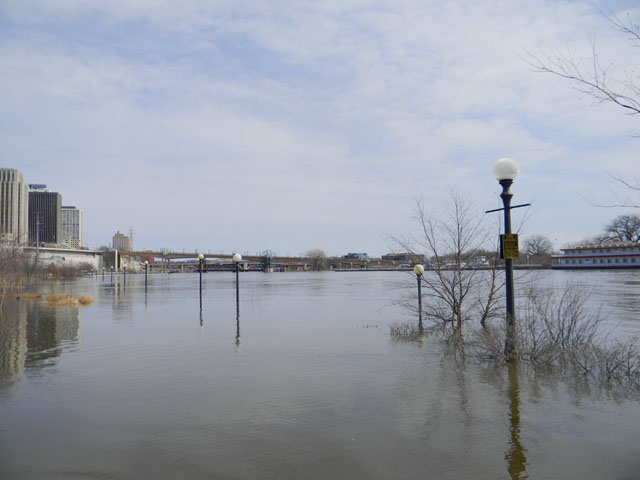