Looking at the picture featured with this article may cause some confusion as related to the title of the story about flooding on the rivers. The portion of the Upper Mississippi River at Lock and Dam 10 and north in to St. Paul, Minnesota -- cared for by the U.S. Army Corps of Engineers (USACE) St. Paul District -- is closed for the winter, and frozen portions of the river and ice-covered locks in that section are a sheer contrast to the flooding occurring below there.

On the Ohio River, American Commercial Barge Line (ACBL) reported on Feb. 22 that the flooding conditions on the Ohio River (OR) has reduced the max tow size to 12 barges from 15. "Daylight-only operations southbound at the following locks, Markland (OR Mile 531), McAlpine (OR M607), Newburgh (OR M776), John T. Myers (OR M846) and Illinois Central railroad bridge in Cairo (OR M976)," noted ACBL.

Tom Russell of Russell Marine Group told DTN on Feb. 21 that the Smithland Lock at OR M918 is inoperable and closed to all barge traffic. "Forecasts call for a bit of a drying trend that will help relieve high water. The lock closure at OR M918 is expected to be in effect until the first week of March. The closure will have a major impact on supply chain until reopened."

The Illinois River has had ice slowdowns/stoppages over the last few weeks, but a recent warming trend has allowed conditions to improve. "Traffic is moving slowly due to ice and the fact that the river is above flood stage in a few areas. The forecast calls for a return to below freezing temps in the coming week," said Russell.

While the St. Louis Harbor area has no ice, and water levels are normal, tow sizes southbound out of St. Louis are subject to safety protocols due to the high water south of there.

The Ohio River at Cairo is currently in major flood stage at 54.88 feet and is expected to rise to 56.5 feet by March 1 and stay there for three to four days. The National Weather Service (NWS) on Feb. 24 noted that major flooding was occurring along the Ohio River at Smithland Dam, Paducah and Cairo.

"The Lower Mississippi River (LMR) is experiencing high water at above flood stage levels from Cairo to New Orleans. Traffic is moving but slowed due to tow size reductions and daylight only movements is some areas. Some barge loading terminals on the LMR are unable to load due high water," added Russell.

"New Orleans and Baton Rouge Harbors continue to fight operational slowdowns and stoppages due to high water and weather; unrelenting fog and rain," said Russell. "Safety protocols are in place, which slows barge and ocean vessel traffic considerably. Since Jan. 1 to Feb. 21, operational production in the Harbor has been reduced by an estimated 30% due to these factors. Port congestion remains a problem with limited anchorage available." Moderate flooding is occurring and major flooding is forecast for the Mississippi River at Baton Rouge noted the NWS. The river is expected to continue rising to near 43.5 feet by Monday, March 18.

Due to the rising river levels, the USACE is expected to begin opening bays of the Bonnet Carre Spillway as soon as Feb. 28 to deal with a rapidly rising Mississippi River that, by March 17, could swell to 17 feet, the official flood stage at the Carrollton Gage in New Orleans. If the USACE does open the spillway, it would mark the third time the spillway has opened since 2016.

The U.S. river system may not return to normal levels anytime soon. Once the snowmelt occurs in Minnesota (after recording over 35 inches of snow in Feb.) and states south of there, the flooding will start in St. Paul, Minnesota, and continue all the way down to the Gulf as the water heads south.

On Feb. 21, the NWS released their 2019 Spring Flood Outlook noting that, "Over the Upper Mississippi River basin in Minnesota, Wisconsin and much of Iowa into northern Missouri, snow water equivalents and snow depths are well above what is typically observed. Conditions are favorable for significant flooding, particularly if rainfall over the spring months is above the seasonal average."

If the flooding becomes severe enough, river terminals may have to stop loading out, and if empty barges can't make it upriver that would add to the slowdowns. It would be detrimental to farmers who rely on river shipping, with some already suffering financial consequences from the trade war, which is causing poor soybean basis bids due to the lack of China buying U.S. soybeans not only during harvest, but since late summer 2018.

It's going to be a long spring and early summer for everyone along the rivers, especially in the states where the winter snowfall has already exceeded expectations.

Here is a link to the entire NWS Spring Flood Outlook: https://www.weather.gov/… 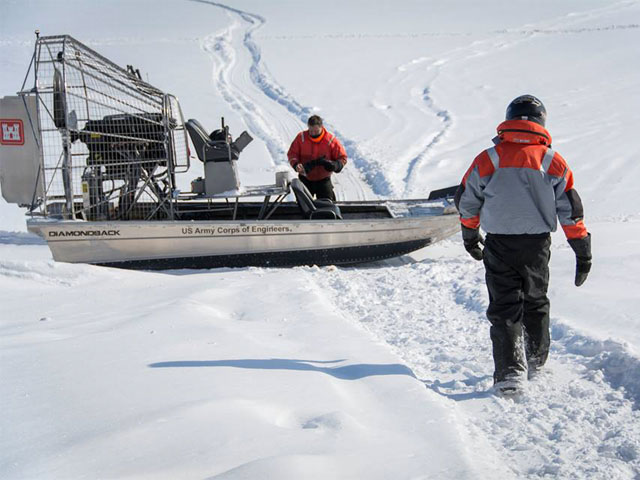