In late 2015, Congress extended the deadline for positive train control (PTC) implementation by at least three years to Dec. 31, 2018, with a possible extension to Dec. 31, 2020, if a railroad completed certain statutory requirements necessary to obtain an extension, according to the Federal Railroad Administration (FRA).

Here is a link to the third quarter data: https://www.fra.dot.gov/…

"The progress made over the last year is a testament to what can be accomplished with proper focus and attention. We encourage any railroads seeking an alternative schedule to submit their formal requests in a timely fashion," said FRA Administrator Ronald L. Batory in the press release.

According to the FRA, Quarter 3 data as of Sept. 30, 2018, showed 24 railroads had installed 100% of the PTC system hardware required for implementation. Eleven other railroads had installed between 95% and 99% of the required hardware. "All railroads using radio spectrum-based PTC have acquired sufficient spectrum. In part due to efforts from FRA, Quarter 3 data shows a 67% decrease in the number of “at-risk” railroads, down to five from 15 at the end of 2017. This is also a 44% decrease in at-risk railroads since Quarter 2 of 2018," noted the FRA.

FRA considers any railroad that had installed less than 95% of its PTC system hardware to be at risk of not having met either the congressionally mandated deadline of Dec. 31, 2018, or the statutory criteria necessary to qualify for an alternative schedule. Hardware installation is an initial phase of implementation, and only one of six statutory criteria required for an alternative schedule, which has a deadline of no later than Dec. 31, 2020.

In a statement released on their website on Dec. 31, the United States Department of Transportation (DOT) said that, "The 41 railroads required by Congress to implement positive train control (PTC) systems by Dec. 31, 2018, have submitted documentation that they assert is sufficient to meet the statutory requirements for system activation or the statutory requirements to qualify for an alternative schedule (“extension”) for up to two additional years to complete full implementation."

On Dec. 18, 2017, a southbound Amtrak Cascades train missed a curve and partly derailed onto Interstate 5 near Tacoma, Washington. The derailment and crash killed three passengers and injured 70 people that were either train passengers or were in cars on Interstate 5 below the overpass. So far, no official cause of the accident has been released, but according to reports, the train entered a curve at 78 miles per hour (mph), well above the 30 mph speed limit.

Had PTC been installed, the system may have stopped the accident from happening, because it is designed to automatically stop a train before certain accidents occur. In particular, PTC is designed to prevent train-to-train collisions, derailments caused by excessive train speed and/or train movements through misaligned track switches.

Amtrak said on their website that all Amtrak-owned or controlled track will have Positive Train Control (PTC) in operation Jan. 1, 2019, except approximately four miles of slow-speed track in the complex Chicago and Philadelphia terminal areas. "We expect to have the Philadelphia area complete this winter and Chicago in early spring. Also, the 135-mile segment of track from Dearborn to Kalamazoo, Michigan, has PTC installed and in the testing phase, however, final vendor and regulatory approvals will occur in late January."

Amtrak has also said they are working closely with the "tenant" railroads and are putting them through the same safety risk assessment that they put themselves through.

Here is a link to Amtrak's update: https://media.amtrak.com/…

Burlington Northern Sante Fe Railway Company (BNSF) announced in December 2017 that it had fully installed PTC and was operating under PTC on all mandated subdivisions well ahead of the year-end deadline. However, in mid-June 2018, they submitted a request to the DOT for a two-year extension of the PTC deadline, due to the FRA current interpretation of the law that "full implementation status cannot be achieved until all non-BNSF trains and/or equipment operating on its PTC-equipped lines are also PTC compliant," according to the BNSF website. The FRA approved the extension request in September 2018.

"We are actively working with each of the approximately 30 railroads with which we need to be interoperable to identify their needs and how we can be of help. This assistance ranges from technical, operation and regulatory advice to a variety of services such as back office hosting and crew training," noted the BNSF.

The BNSF stated that they have achieved interoperability, and activated PTC for several passenger railroads, including Amtrak, Metra, Metrolink, Northstar and Sound Transit where they run on BNSF. "This is an important achievement since one of the primary purposes of PTC is to provide protection where rails run freight and passenger service. We have also accomplished interoperability with short line roads Montana Rail Link, Louisiana & Delta Railroad and Dakota, Missouri Valley and Western Railroad." Interoperability is defined as "the ability of computer systems or software to exchange and make use of information." (dictionary.com)

The DOT in their Dec. 31, 2018, press release said that, "based upon railroad self-reporting, as of the third quarter of 2018, the percentage of track segments completed is 94% for freight railroads and 77% for passenger. This compares to 20% for freight and 13% for passenger as of the third quarter of 2016. 2018 yielded many positive results and highlighted great collaboration between industry and government. However, significant work remains to be done in order to ensure additional field testing, interoperability and full implementation arrive as soon as possible."

Here is a link to the DOT statement: 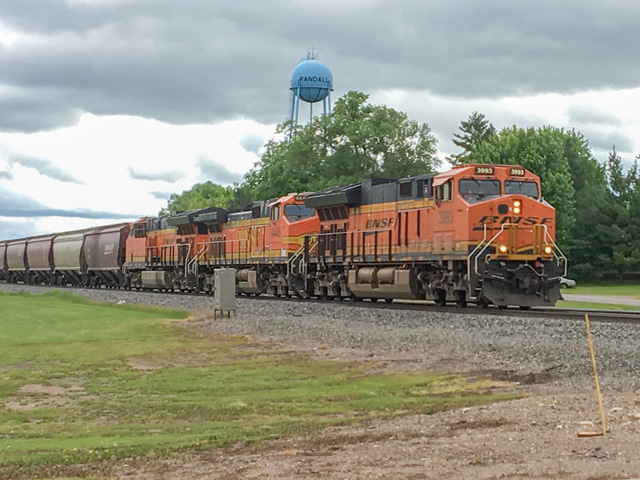