One year ago, on June 12, I had written about the severe drought in South and North Dakota that intensified as July rolled around. By that same time in June, much of the winter wheat in South Dakota had been either sprayed out after insurance zeroed it out or baled by livestock owners for feed.

"This year the crop was off to a great start" said Tim Luken, Manager of Oahe Grain in Onida, South Dakota. "With the exception of the first week of April blizzard, two weeks later, the temps were in the 80s, sending farmers out in the fields for the start of the 2018 planting season."

Luken noted that winter wheat came out of dormancy in "fine shape" and as spring wheat was planted in good time, acres were actually up from last year. "Producers no more than got done with spring wheat and went right into planting corn and behind the corn come soybeans and then sunflowers. Everything come up in excellent shape," said Luken. "Corn come up very uniform and very fast due to the warm soil temps. They say corn knee high by the Fourth of July; well let me tell you, how about shoulder high this year for the Fourth of July and I am 6 foot 5 inches. I have never seen corn look so good for this part of central South Dakota."

That all changed for Sully County when the great white combine paid a visit on June 27. That hailstorm brought heavy rain as it moved from northwest of Sully County and was five- to 10-miles wide as it moved southeast, taking everything out along an 80-mile swath. Then, on June 29, the white combine returned as if it wanted to finish the job. Hail hit between Onida and Gettysburg, and west of Agar to 20 to 30 miles east and was three to five miles wide. On July 1, the National Weather Service in Aberdeen said the June 29 storm was a "supercell thunderstorm" that moved through portions of Wyoming and South Dakota and traveled over 420 miles.

"Cornfields are stripped down to just ankle-high stalk, and wheat fields and grass ditches look like summer fallow," said Luken. "One farmer lost 15,000 acres of 40,000 planted. I talked to one farmer who lost 20 quarters of his crop and I also know of some farmers that lost 100% of everything. If I had to put a guess to how much we have lost just in Sully County, I would say at least 30% of the county was affected. Wheat in that county went from bales to hail, a second year of loss. Many thousands of acres equals many millions of bushels that will be lost for area farmers and grain elevators to handle this marketing year."

Farmers in central Nebraska suffered more than one hailstorm this summer as well, with the storm on June 30 producing up to golf ball-size hail in a swath up to 3 1/2 miles wide from Arapahoe to south of Bertrand to east of Loomis. Andrew Philips, in Loomis, Nebraska, had hail on 750 acres. "Pending insurance adjustments, not sure what they will zero out, but from the looks of it, I think they will zero them. We had 320 acres of irrigated corn and 430 acres of irrigated soybeans. We did not lose our entire 2018 crop, but it took about 1/4 of our acres that were looking really good and close to tasseling. We had 3.50 inches of rain and pea- to golf-ball size hail along with 60 plus miles per hour winds in amount of 30 to 45 minutes."

"On May 29 there was spotty hail, with one of my fields getting the ground covered," said Wayne Martin who farms in Pottawattamie and Shelby counties in southwest Iowa. "Some corn was severely damaged, and at another farm where I had beans got bad hail too. Three weeks later that corn looked fairly good, but I lost 25% stand in places. Beans were still quite uneven in size. Bean population is down to 70,000 in places.

"On top of that, we received 13 inches of rain in June, most of it last half. On June 28, we had a storm that produced 70 plus miles per hour winds, causing green snap in the corn. Some areas saw 70% to 97%; my hailed corn has up to 80% snap in some areas. More wind on the night of July 4 did some more damage on weak corn stalks. Now we are also seeing Japanese beetles exploding in beans, with some leaves totally defoliated. Beans are yellowing in low ground and high clay side hills from too much rain."

Adam Ramthun, Manson, Iowa, said they got 2 to 3 inches of rain on July 4 and 1 to 2 inches June 30 and July 1. Other locations near him saw 4.5 inches since June 30 and 15 inches since June 11. "I was able to get out and get a majority of the soybean spraying done before the June 30 rain and also replanted to the low spots in a few fields," said Ramthun. "Those replants have all but been drown out again and lost. I have not been out looking for diseases in the corn or beans and have not heard of any big pressure in our area. Most of the first-planted corn is beginning to tassel in the area. A couple fields have lost a lot of nitrogen, and I am hoping to have a custom applicator add some when it dries off."

"In my almost 41 years of existence I have never seen water standing like this," wrote Jesse Fast in Delft, Minnesota, on a June 21 Twitter post. In his daily weather blog, Minneapolis-St. Paul meteorologist Paul Douglas noted on June 26, that according to the National Oceanic and Atmospheric Administration (NOAA), the Minnesota average June rainfall is roughly 4 inches. "Some sections of southwest and southcentral Minnesota and northwest Wisconsin have picked up three times the average amount of moisture in the last 30 days, with southern Minnesota receiving up to three months' worth of rain in that timeframe," said Douglas.

On July 5, Fast told me that, "Fortunately we missed the rain over the weekend and only ended up with .3. It's still a mess with a lot of stuck sprayers and yellow corn. The first of some replants started today but most growers are saying it's too late for the beans and are just going to leave the drown outs. The water hasn't gone away in many holes from the rain three weeks ago yet."

Here is the link to the order and counties involved: https://mn.gov/…

Justin Doerr, Plainview, Nebraska, said on July 5 that in his area, the rain was actually a blessing. "Sure, we have areas that are drowning out and other areas we couldn't plant, but the majority of the fields look great. Typically by now, irrigation systems are running hard, but ours hasn't moved all year. It has only been here lately that we've been catching hail/wind damage in the area. Except for some isolated spots, the hail has been light and crops are looking great. So far, pest pressure has been low, but disease is starting to show up in some areas. I would say weed control is our number one issue. With the frequency of rain, we've had only a few opportunities to be in the field. Many farmers in the area are dealing with excessive volunteer corn. This is due to the large wind event we had last fall that laid several fields over."

Dave Newby of Bondurant, Iowa, told me on July 5 that after the 6.5 to 8 inches of rain on his fields at the end of June, the main problem he saw in the corn is grey leaf spot. "We have decided to use fungicide by airplane, but it was a tough call with the plunging corn price. Not generally an overabundance of it now, but we want to stay ahead of it. We have stripped leaves from a hail event, so disease has a little easier time of getting started. We’re going to try for 200 bushels per acre (bpa) yet with the fungicide, but we might just get 180 bpa if the N runs out.

"We have had some northern corn leaf blight in past years, but I can’t say there is a problem with that this year. Corn seems to have gotten established ahead of the rain a little better than the soybeans. I have concerns about losing too much nitrogen before the ear fills. Most of the corn looks dark green, but you can see yellowing and die back in the low spots starting to occur," Newby said.

"The soybeans generally look good where they are not drowned or water stressed. Seeing a few Japanese beetles and there’s a little more feeding than I’d like to see, but not enough to reach the economic threshold yet. We treat our beans with Ilevo on the seed, which helps with soybean cyst nematodes and sudden death syndrome. The beans are not growing very fast though. The soil is too saturated, and there is not enough oxygen present for optimal growth. About 10% of our beans are drowned out or severely compromised. We were shooting for 75 bpa. I would say 60 bpa would be a more realistic goal now."

This comment from Newby likely rings true with farmers already stricken by severe weather events: "Hopefully, the worst is about over, but it could be a long summer."

Let's hope the great white combine is out of commission for the rest of 2018 and that the constant, extreme rain events are over.

Here is a link to the National Weather Service precipitation map for June across the Upper Midwest Regions:

Here is a link to the National Weather Service Aberdeen, SD showing a map of the second "hail scar" left behind on June 29 after one on June 27: https://twitter.com/… 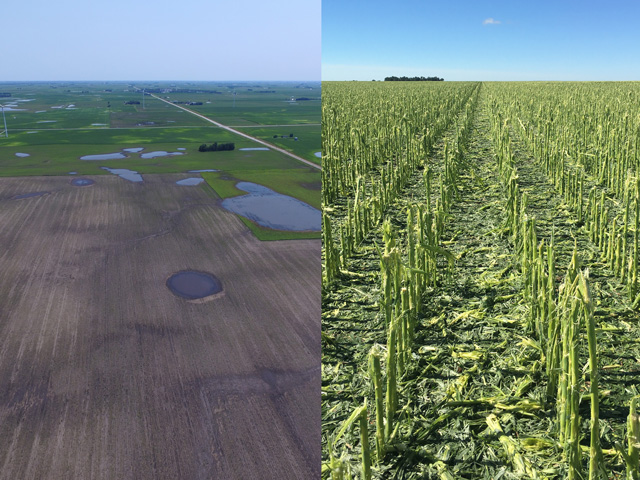