Rail shippers in Canada and the U.S. could be heard breathing a sigh of relief late Friday evening after the CP announced it had come to what may be just a temporary agreement with the two unions that had planned to strike April 21. If that strike occurs, it will disrupt rail movement in and out of Canada and the western U.S. because they rely on service from the CP.

The CP announced April 20, "This evening, we reached an agreement with both the Teamsters Canada Rail Conference-Train & Engine (TCRC) and the International Brotherhood of Electrical Workers (IBEW), which averts the potential work stoppage of 12:01 a.m. ET tomorrow, April 21, 2018. As such, CP's embargoes for shipments routing to and from CP Canadian locations has been cancelled effective immediately. CP will immediately begin to execute a safe and structured start-up of its train operations in Canada."

However, it does not appear that a strike is completely off the table. The Minister of Labor directed the Canadian Industrial Relations Board to administer a ratification vote on each of the company's final offers to members of the Teamsters Canada Rail Conference (Teamsters) and the IBEW, according to the CP.

According to CBC Canada, Teamsters Canada President Doug Finnson said in a statement, "CP succeeded in delaying the inevitable. The government will bring this ridiculous offer to our members and we strongly recommend that members vote against it. I would like to reassure our members that we have given nothing up."

The Teamsters and the IBEW only agreed to postpone a strike until after the vote, but Finnson said, "CP has exhausted all of its possibilities and will have to eventually face its workers." Finnson described CP as victims "of their own aggressive behavior," with the union charging that Teamsters had filed thousands of contract violations grievances and multiple unfair labor practice complaints against its employer, according to CBC.

Until the unions vote and accept an offer by the CP, the threat of a strike is still imminent. Stay tuned.

Since the end of February, commerce on the Mississippi, Illinois and Ohio rivers has been hampered by high water. Heavy rains and snow melt caused massive flooding and while there has been some relief, flood warnings have now been issued again for parts of the Ohio River at Cairo, Illinois, and the Mississippi River at Vicksburg, Mississippi, and all the way in to the Gulf.

Tom Russell, Russell Marine Group told DTN that, "High water safety protocols on the Ohio River and Lower Mississippi River from Cairo to New Orleans have been in place since March. As long as extreme rain events do not occur, the current forecasts indicate water levels will fall sufficiently to lift safety protocols sometime during the second half of May."

On April 22, The NWS issued a flood warning, saying it continues for the Ohio River at Cairo until April 29. At 10 p.m. Sunday, the stage was 43.2 feet. Flood Stage is 42 feet. The Forecast is for the river to continue rising to near 44.9 feet by early April 27 morning. The river will fall below flood stage early April 29.

By midweek, barge freight rates did back off, mainly for the next week forward, although bids on the nearby were 25% lower versus Monday. A barge line noted that the lack of any grain moving was one of the reasons shippers have lowered bids. However, by the end of the week, some shippers did buy offers that were posted for the rest of April and interest started to pick up for May.

Basis along the river was stronger in many spots by April 20, thanks in part to cheaper freight, but empties are still slow to return northbound out of the Gulf. CIF NOLA bids remained firm, as logistics in the Baton Rouge and New Orleans harbors remain backed up and extremely congested. This has been the case for more than six weeks. According to the NWS, the flooding will continue for at least the next few weeks.

On April 21, the NWS issued a continuing flood warning for the Mississippi River at Baton Rouge until May 8. NWS said at 9 p.m. Sunday the stage was 37.3 feet. Flood stage is 35 feet. The forecast is for the river to continue to fall to below flood stage by Tuesday afternoon. The impact is at 36.0 feet, river traffic and industrial activity on the river side of the levees will be greatly affected. Navigational safety regulations will be strictly enforced. Meanwhile, the impact at 35 feet is river islands from Red River Landing downstream to Baton Rouge will be inundated.

Russell said that, "In port, barge deliveries to grain terminals now take four to six days. Ships are slow to load due to the conditions and incidents of high-water related accidents. Anchorage space has been reduced due to high water. An oil spill two weeks ago in New Orleans closed the river for a few days. That stoppage caused port gridlock that pilots are still trying to work through. Arriving ships are being held off SWP (southwest pass) for one or two days, waiting for available anchorage space."

Farther north, at the head of the Upper Mississippi River corridor in St. Paul, Minnesota, the river is expected to rise to 14.3 feet (minor flood stage is 14 feet) by April 29. So far, major flooding (17 feet) is not expected, but the Twin Cities just experienced their largest April snowfall on record, and for the entire month of April as of the 18th, they received 26.1 inches, breaking the previous record of 21.8 inches in 1983. Also, since the start of 2018 the Twin Cities broke another snowfall record, receiving 70.3 inches as of April 18.

As long as the snowmelt remains on a slow pace and no heavy rains show up in the next few weeks, we should be in good shape in St. Paul. However, as the river fills up in St. Paul, it has to move south, which will only add to the already high water still present in the Lower Mississippi River to the Gulf.

Here's a link to the NWS for all U.S. flood gauges: https://water.weather.gov/… 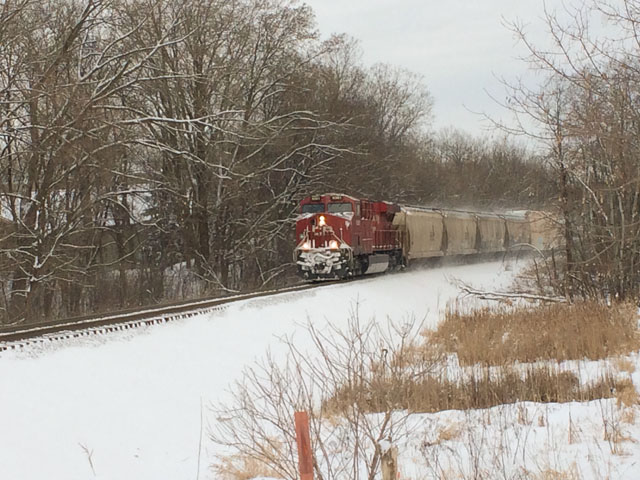