The National Grain and Feed Association (NGFA), with assistance from the North American Millers Association (NAMA), alerted the Surface Transportation Board (STB) on March 10 of major concerns it had received from rail-service customers. These included severe rail service problems and excessive charges involving Class I railroads that were experienced by shippers and receivers of grains, oilseeds and processed grain products.

The NGFA noted in its letter that rail customers "continue to be subjected to the disparity in which rail carriers unilaterally impose on their customers costs and penalties for performance-related issues, with no commensurate reciprocal penalties imposed upon carriers when they fail to perform."

Here is a link to the letter from the NGFA outlining rail service degradation issues and imposition of new and escalating accessorial charges: https://goo.gl/…

On March 16, the board responded to the NGFA concerns by sending a letter to all U.S. Class I railroads, requesting that they provide their service outlook plans in the near term and for the remainder of 2018, "due to increased concerns over deteriorating service." The board asked for information about each railroad's network, including locomotive availability, employee resources, local service performance, service demand, communication strategies and capacity constraints.

In its letter, the STB expressed concern about the overall state of rail service based on the weekly data supplied by each Class 1 railroad. The board noted that some railroads reported that system average dwell time has increased, as well as the average number of cars that have not moved in 48 hours. The board also requested that each Class 1 railroad address all the concerns presented by the NGFA and NAMA.

BNSF was one of the first railroads to respond, noting in its letter that winter weather, including heavy snow and below-zero temperatures, affected velocity and fluidity on portions of the company's primary route between the Pacific Northwest and the Midwest. BNSF Railway President and CEO Carl Ice wrote in his letter that, "BNSF believes the worst of those impacts are behind them as the carrier heads into spring."

Ice pointed out that things have improved of late, noting that total volume moved by BNSF marks a historic high for this time of year; BNSF topped 200,000 units for five straight weeks and eight of the last nine weeks through March 22. In addition, he said that dwell time dropped by more than 7% annually on a year-to-date basis. This was in spite of two trains stranded for multiple days under snow and ice on the mainline track section of the Hi-Line Subdivision on the Northern Transcon and two simultaneous derailments in February on both the Southern Transcon and Northern Hi-Line (Montana).

In his report to the board on March 30, Canadian Pacific (CP) President and CEO Keith Creel said, "Our network has now recovered from the weather challenges to such an extent that volumes this month, March, will be our highest since March 2015, as measured by revenue ton miles. Overall, volumes to date have been in line with our initial forecast.

"We have seen stronger volumes than we expected in several areas, in particular potash, frac sand, fertilizer and intermodal. We have also seen an increase in demand for Canadian crude oil by rail given the development of pipeline constraints that have driven price spreads in favor of rail. Service challenges on a Canadian competitor railroad have contributed to an unexpected shift of business to CP as well," said Creel.

"With respect to NGFA's concern relative to the late 2017 timeframe, CP experienced significant outages on our mainline in Western Canada due to a derailment in a mountain tunnel in British Columbia, followed by a series of avalanches that took both our line and CN's (Canadian National) line out of service in the Fraser River Canyon."

Here is a link to all the letters received by the STB in response to their initial request: https://www.stb.gov/…

RAIL SERVICE IN CANADA HAS BEEN A DISASTER

Despite the commitments made by Canada's two railroads, the CP and CN, to improve grain shipping in the Prairies, the path to recovery has been painful and slow. "Grain companies have fallen months behind in accepting producers' contracted grain, which has negatively affected farm cash flow. Exporters have incurred demurrage costs charged by West-Coast vessels. Country elevator space is critically tight on the Prairies, while concerns are growing that the railroad recovery could push cars into the country at the worst possible time, as yards turn muddy with the snowmelt. On top of that, weight restrictions on roads are right around the corner with a compressed spring season ahead as winter conditions linger into the month of April," said DTN Canadian Grains Analyst Cliff Jamieson.

Jamieson noted that recent data from the Ag Transport Coalition, an industry group that is responsible for shipping 90% of prairie grain, shows that the two railroads spotted 69% of the empty hoppers ordered for loading across the Prairies for week 35 shipping, or the week-ending April 1. "Both railroads spotted 69% of the cars requested, a week-over-week improvement for the CP while a decline in performance for CN. This is the best-combined performance seen in 10 weeks, after the two railways spotted just 32% of the hopper requested five weeks ago in week 30," he added.

"The backlog of cars ordered waiting to be spotted fell by just 89 cars from the previous week to 3,460 cars, the smallest number reported in eight weeks and has fallen in four of the past five weeks after reaching a reported high of 5,382 cars in week 30," said Jamieson.

Jamieson added, "At the same time, the number of cancelled or rationed cars continues to grow. This number increased by 659 cars over the most recent week to 21,851 cars. While this number has grown steadily, almost entirely due to CN cancellations, week 35 saw the week-over-week increase grow for the first time in three weeks. In total, unfulfilled demand is reported at 31,232 cars, or at 90 metric tons per car, approximately 2.8 million metric tons. It is interesting to note that shippers have ordered 298,055 cars in the first 35 weeks of the crop year, just 56 cars less than the number ordered over the same period in 2016/17.

Jamieson said that implications of the poor service are many, as noted above, and will be felt for a long time. "Meanwhile, the federal government's Bill C-49, designed to increase competition and increase railroad accountability, remains tied up in the political process in Ottawa," concluded Jamieson. 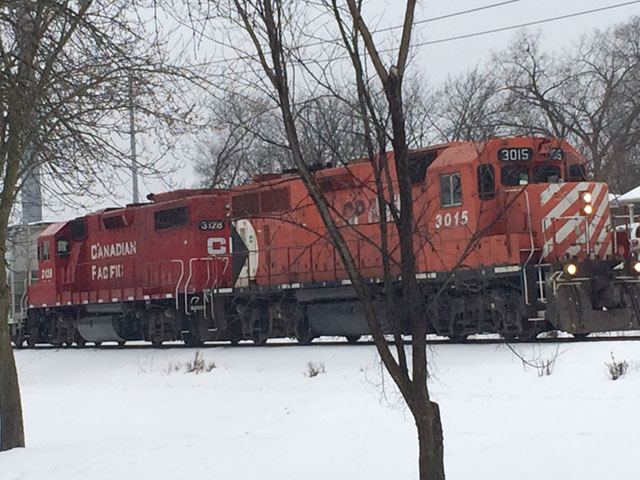