Just over one week ago, water levels on the Illinois River and Upper Mississippi, between St Louis and Cairo, Illinois remained low, but the forecast for rains at that time were expected to "improve" that situation. What followed was more than a month's worth of rain falling on some locations in the central U.S. in less than 48 hours, from Feb. 19-21, according to Accuweather.

On Feb. 21, the U.S. Army Corps of Engineers, Rock Island District released this statement: "Due to high water on the Illinois Waterway, the T.J. O'Brien, Dresden Island, Marseilles and Starved Rock locks have closed to navigation and will remain closed until water levels drop and safe operations can resume.

Then, on Feb. 22, the CME released a statement saying, "Effective immediately and until further notice, CBOT is hereby declaring a condition of Force Majeure due to load-out impossibility at a majority of Corn regular shipping stations on the Illinois River." Here is a link to the full announcement: https://goo.gl/…

As the current trading month of March nears first notice day, Feb. 28 and first delivery day, March 1, the Force Majeure basically alleviates any penalties that would incur at a delivery facility on the Illinois River that is unable to perform because the river is closed. A river/lock closure stops barges from moving up or down river and for all practical purposes, stops all commerce until conditions improve.

The CIF NOLA basis for corn has been strong all week as exporters at the Gulf of Mexico need to fill waiting vessels for export. The MGEX barge trading rules explains the term "CIF NOLA" used in barge contracts: "FOB means free of charges on board barge or vessel. The terms CIF or "delivered," followed by a destination point, shall mean FOB origin, but the price includes the cost of the cargo FOB origin point, plus cargo insurance, plus barge or vessel freight to the destination rate point." In this case, the destination is NOLA, which means New Orleans, Louisiana.

Barge freight has been stronger, and Ceres Barge Line noted in its freight report Feb. 23 that, "Markets were up again yesterday afternoon and again this morning as shippers continue to search for barges." Freight has increased, not just for nearby, but into April as well. The longer the rivers remain in flood stage, the longer it will take to get empty barges up river to be loaded out for contract obligations at the Gulf.

Kent Hamm, buyer for the DeLong Company in Minooka, Illinois, told DTN on Feb. 22 that basis in his area had remained steady so far, even with all the high water. He also said his electrician was busy working at the Illinois River houses, disconnecting electric motor and other equipment for removal ahead of the flooding. "An electric motor that gets submerged is junk once water recedes," added Hamm.

The Ohio River is under siege once again from high water. American Commercial Barge Line (ACBL) noted in its river update Feb. 22 that, "Many fleets and docks are shut down up and down the river. Slow transits are expected throughout the river and an additional 2 to 6 inches of rainfall is in the forecast, which will cause the river levels to continue to rise. Do not expect returning to normal conditions for at least two-to-three weeks.

"We are beginning to see bridge clearance issues in Cincinnati, and the river is not expected to crest for another seven-to-10 days," added ACBL. "River levels in Cincinnati are expected to approach 60 feet, which will be around the 20th highest in history."

Over the weekend, The Weather Channel reported that, "Floodwaters on the Ohio River in Cincinnati rose above 60 feet (moderate flood stage) Sunday morning for the first time since 1997. The Ohio River (McAlpine Upper gauge) in Louisville, Kentucky, rose to its tenth-highest level on record Sunday and its highest level in about 20 years. Records at that gauge date back to the late 1800s."

On the Mississippi River at St. Louis Harbor to Cairo, water levels were high as of Friday, but were not expected to reach flood stage. However, in the Lower Mississippi River (LMR) from Cairo to New Orleans, the picture is much different, due in part to the high flows off the Ohio River.

ACBL noted that in the LMR, "High water has resulted in reduced tow sizes NB and SB. In most cases, tows have been reduced by two strings SB (five-to-10 barges) and we expect this to continue for the foreseeable future."

Tom Russell, of Russell Marine Group, said that, "On top of the flooding, the river has been experiencing unrelenting fog due to record warmth over the past two weeks. Temps have been running as much as 30 degrees (Fahrenheit) above average in some areas. Warm temps will continue, which means likelihood of fog will continue slowing barge movements.

"New Orleans and Baton Rouge Harbors have seen unprecedented nightly fog over the past two-to-three weeks, which has caused logistical delays, stoppages and back-ups," said Russell. "Warm moist weather will continue during the upcoming weeks, which means fog could continue to be an issue. Barge deliveries in the Port are behind schedule due to fog."

River levels in the Harbor are on the rise and by next week could reach levels where some safety restrictions will start to be implemented, added Russell. "The river will continue to rise and by mid-March reach an estimated level of 14 feet, which will slow logistics, barge movements and vessel movements considerably."

The problems on the rivers are likely to not end anytime soon as more rain is expected in the coming days. On top of that, we will start to see a "spring melt" from the Upper Mississippi River this week. As snow melt moves south, it will add to the already swollen rivers. 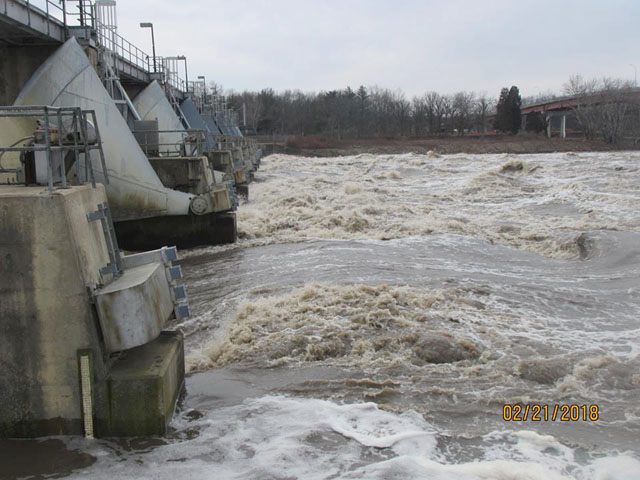