"The study underscores that if the inland waterways were unavailable to transport the nation's freight, the average number of trucks on rural highways would increase and result in significant impacts on safety, highway maintenance cost and fuel consumption. Increased rail transportation safety impacts may occur at rail crossings, especially in urban areas and in increased fuel consumption," said MARAD Executive Director Joel Szabat in a press release Nov. 1.

On the same day the study was released, Agriculture Secretary Sonny Perdue posted on Twitter, "At the White House to talk to various stakeholders in a conversation about POTUS's infrastructure agenda. Important to rural America."

"During the conversation, Leininger thanked Perdue for shining a light on the dilapidated state of inland waterway locks and dams. Both Leininger and Perdue agreed that the U.S. transportation infrastructure provides a competitive advantage over foreign competitors, but that inland waterways must be bolstered to support Perdue's goal of growing American ag exports," said the NGFA.

“The larger unknown is how improvements to these 1920s and 1930s locks and dams, which President Trump described as 'critical corridors of commerce' during his June visit to the Ohio River, will be funded,” added the NGFA. The NGFA said it will continue to monitor and inform this debate, as well as "work with congressional partners who previously have helped defeat the concept of allowing for tolling or lockage fees on the inland waterways that would drive traffic off the river and increase the burden on U.S. highways and railways."

The October study notes that on waterway segments where dams and locks are necessary, any disruption in a lock's operation can significantly inhibit barge transportation. In some cases, lock outages are scheduled to allow for necessary maintenance. These scheduled outages are announced months or even years in advance so that affected waterway shippers can adjust commodity inventories or otherwise prepare for the service disruption.

In other cases, however, "weather, accidents or mechanical failures" lead to unscheduled lock closures of varying durations. Because carriers and shippers have no opportunity to prepare for unscheduled lock outages, these closures can be tremendously disruptive to water-dependent commerce, according to the study.

The most notable disruption recently was the multiple closures between September and October at Lock and Dam 52 and 53 on the Ohio River. These disruptions occurred at the worst time for farmers who were hauling their fall harvest to the river for shipment to the Gulf. Even though the river finally reopened there on Oct. 19, the backlog of tows is still an issue.

As of Nov. 3, Ingram Barge Co. noted on its website that Lock 52 had 27 boats in queue, and informed shippers to plan for a one- to two-day delay transiting through there. All traffic is scheduled to transit the main (1200 FT) lock chamber, while a contractor places stone above the wicket dam to facilitate repair efforts at Locks and Dam 52. The main lock chamber will be utilized in lieu of the navigation pass until river elevations exceed the maximum locking stage, 20.7 feet. Throughout the project, transiting the navigation pass will be evaluated based on river conditions, according to the river condition update on the website.

One of the key findings of the study is that each of the four locks considered within the study "helps shippers avoid more than $1 billion in additional transportation costs each year."

Every time there are outages at Locks and Dams along the U.S. River system, barge freight increases in some of those cases. In turn, shippers may pass the extra costs to the farmer who hauls his grain to river terminals. Higher barge freight, and in some cases, the inability to haul grain due to river closures, can be detrimental to the farmer's bottom line and overall profitability.

It's time the government takes action to help fix our waterways rather than continue to just talk about fixing them before it is too late and the whole system goes to ruins.

Here is a link to the National Waterways Foundation October study: https://goo.gl/… 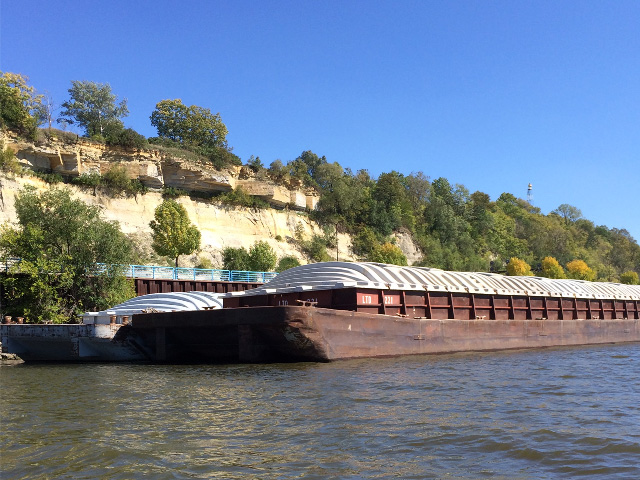