Of the nation's seven largest freight railroads, Union Pacific was ranked highest by ag shippers for its performance for 2016 while Canadian Pacific was ranked lowest in the Soy Transportation Coalition's Annual Railroad Report Card released on Aug. 3, 2017.

The survey, which covered the performance of seven of the nation's largest freight railroads for the 2016 harvest, was completed anonymously by agricultural shippers of various sizes and scale of operations. For the 2016 report card, the survey period was adjusted to cover the entirety of the key September-to-March time frame, which is when a high percentage of the U.S. soybean and grain harvest is transported.

In an email to DTN, Mike Steenhoek, executive director of STC, said, "The idea to do something like this stems from the reality that the Soy Transportation Coalition -- an organization funded by and led by farmers -- is in a position to convey messages (whether complimentary or critical) regarding the rail industry that rail customers may be unwilling to convey. If concerns need to be voiced, the STC is willing to express those on behalf of shippers. Similarly, we want to celebrate success and improvement when that occurs. Both complimentary and critical feedback has been expressed in previous report cards."

The survey has been comprised of the same 11 questions since the report card's inception in 2010. The questions are categorized under: 1.) On-time performance; 2.) Customer service; and 3.) Costs. Participants were asked to rate each of the seven Class I railroads on a scale from 1 to 10 with 10 being the highest and 1 being the lowest.

Survey results showed that, for the fifth time, Union Pacific was regarded as the top-performing railroad, and for the sixth year in a row, survey respondents ranked Canadian Pacific in last place. BNSF Railway received notably lower scores compared to the previous year, in particular, "providing service commensurate with its cost."

Many agricultural shippers cited weather-related challenges throughout the northwestern corridor that significantly impeded the railroad's ability to effectively transport soybeans and grain from states like Minnesota, North Dakota and South Dakota to export terminals in the Pacific Northwest (PNW).

Weather challenges are a constant threat to the BNSF along their Northern Transcon line, especially along the western portion. Excessive snowfall and landslides often plague that area, and the BNSF is diligent about sending crews to clear tracks, sometimes working 24 hours a day, seven days a week. However, when severe weather overpowers the railroad's ability to run on time, (something they can't control) PNW exporters, country elevator shippers, and in the end, farmers are negatively affected.

According to the press release by the STC, survey respondents overall expressed some frustration with rail rates, which many consider an increasing obstacle to agricultural competitiveness. Several respondents asserted that a number of agricultural regions -- due to a lack of proximity to competing railroads or the inland waterway system -- are assessed rates that challenge their profitability.

Currently, the U.S. Surface Transportation Board (STB) is still in limbo as to how to "fix" the current rate review process, a process afforded to rail users under the Staggers Rail Act, which allows shippers to challenge excessive freight rail costs in markets that lack competition. The STB appointed a Regulatory Reform Task Force after President Donald Trump made an executive order on reducing regulation and controlling regulatory costs.

"The STB task force was established to comply with the spirit of Executive Order 13,777, issued Feb. 24, 2017," said STB spokesman Dennis Watson. "The task force mission is to identify rules and practices that are burdensome, unnecessary or outdated, and to recommend to the STB how they should be addressed."

In a July 25, 2017, public hearing held by the task force, the American Association of Railroads President and CEO Edward R. Hamberger stressed that the agency, which is tasked with regulating freight railroads and their privately owned infrastructure, "should work to promote and defend the economic regulatory structure Congress established more than 35 years ago through the Staggers Act, which deregulated important aspects of railroad pricing and routing."

Hamberger called for the STB to "withdraw pending proposals that are inconsistent with the deregulatory goals outlined in the Staggers Act, including regulatory exemptions, forced switching, revenue adequacy and the limit price test."

In response, The National Grain and Feed Association (NGFA) urged the task force to "revamp its rate-reasonableness rules to create a cost-effective, workable methodology for agricultural shippers to challenge unreasonable freight rail rates." The NGFA also urged the task force to recommend that the STB protect the limited safeguards that still remain to shield rail users from the exercise of "unfettered market power" by large railroads.

"The task force must not allow the AAR or its freight rail members to hijack this important regulatory reform initiative in an overt attempt to secure significant policy changes that are inconsistent with existing law and legislative intent, are the subject of ongoing STB proceedings, or for which they have been unsuccessful in securing through the agency's open and transparent rulemaking process," concluded the NGFA.

As for railroad service issues, the STB did adopt a final rule on March 21, 2017, to establish new regulations requiring all Class I railroads, and the Chicago Transportation Coordination Office (CTCO), through its Class I members, to report certain service performance metrics on a weekly, semiannual and occasional basis. While the initial requirements were prompted by the severe service disruptions seen in the winter of 2013-14, the timely reporting of standardized service metrics continues to provide significant benefits to shippers and farmers.

"Railroads are critical for transporting our soybeans and grain to domestic markets and export terminals," said Gerry Hayden, a soybean farmer from Calhoun, Kentucky, and chairman of the Soy Transportation Coalition.

"Without a cost-effective and reliable rail system, agriculture will fail to be profitable. The STC's annual Railroad Report Card is designed to help assess the performance of railroads in meeting the needs of their agricultural customers. The feedback expressed in this year's report card suggests railroads are doing some things right, but that there are a number of opportunities for improvement," Hayden said.

Steenheck also noted that the annual grading of the railroads is a larger overall effort to remind farmers and others who care about rural America, how important rail transportation is to agriculture's profitability.

"I want to find a handful of ways to measure whether rail performance is improving or declining. The data-driven analysis we've done in the past on the rail movement of soybeans and soy products is one way of tackling this. A shipper report card that is more attitudinal is a nice complement to the analysis and will further shed light on the issue," concluded Steenhoek.

Here is a link to the report card results: http://www.soytransportation.org/… 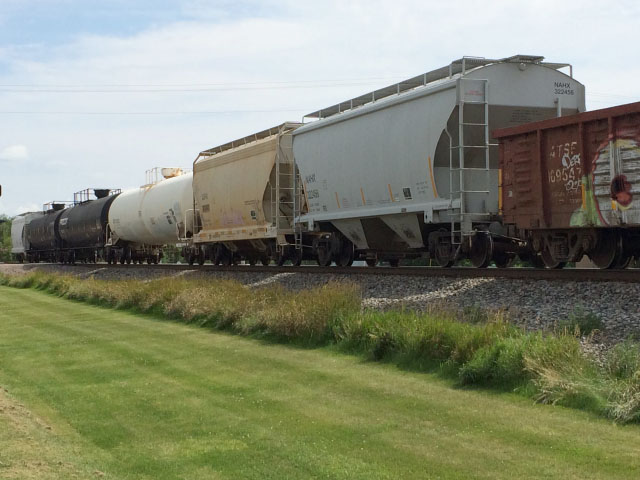